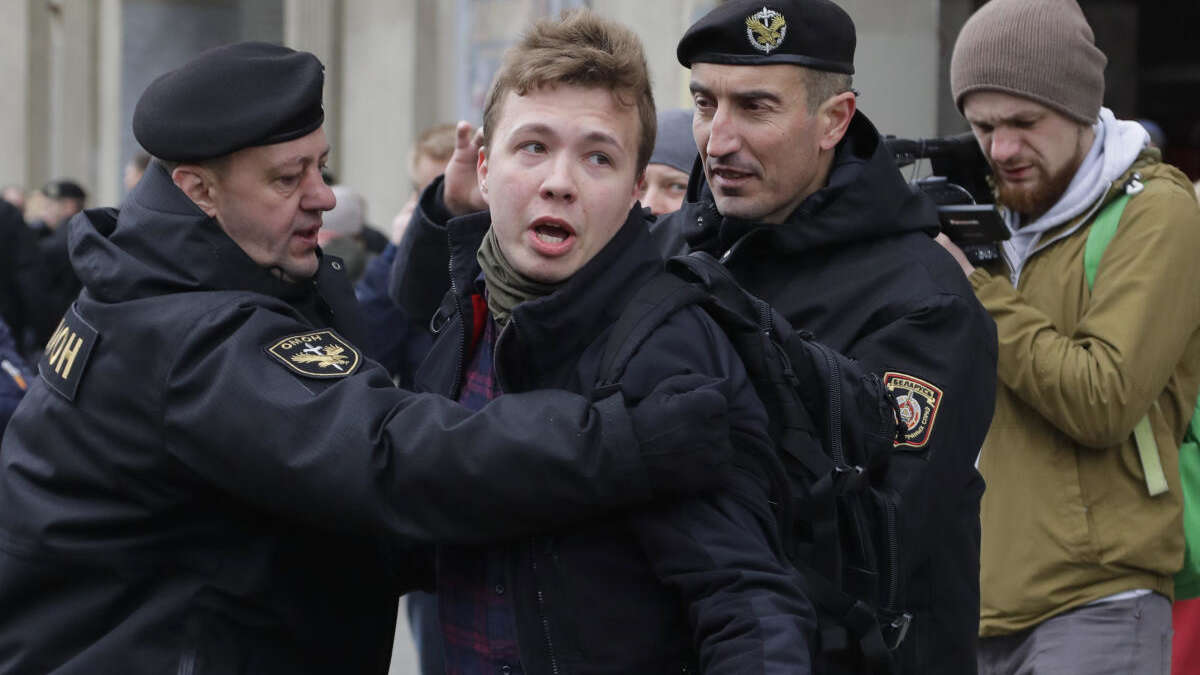 Belarusian television broadcast an interview with the detained government critic Protasevich. His father says this is a testimony obtained through torture.

Minsk – The Belarusian state broadcaster ONT published a trailer of the studio interview with the imprisoned government critic Roman Protasewitsch * on Thursday and advertised it as an “emotional” spectacle. Protasevich could be seen in it with a serious face, terrifying music was playing in the background. The interview was probably made under duress. The 26-year-old, who obviously feels uncomfortable, admits that he has called for protests. He also praises the ruler Alexander Lukashenko.

Protasevich’s father told the AFP news agency that it was a testimony obtained through torture. “I know my son very well and I think he would never say something like that,” said the government critic’s father, Dmitri Protasevich. The video was made as a result of “abuse, torture and threats”. “They broke him and made him say what was necessary,” said Protasevich’s father. It pains him to see the interview. “I am very worried.”

“Whatever he says now, it is pure propaganda,” said Alex Byalyazki, head of the human rights organization Vyasna, before the broadcast by the AFP news agency. Protasevich was confronted with “unfair but very serious accusations” and was thus “at least psychologically threatened” and put under pressure.

Protasevich and his partner were arrested on May 23 after their Ryanair flight was forced to land in the capital Minsk by a Belarusian fighter jet en route from Athens to Vilnius. In response, the EU countries closed their airspace to aircraft from Belarus and issued a landing ban. Airlines from the EU called on them to stop flying over the authoritarian ruled country.

The Belarusian authorities accuse Protasevich of organizing anti-government demonstrations after the controversial presidential election last year. After the election, which was overshadowed by massive allegations of fraud, there were unprecedented mass protests, which President Lukashenko had put down. Thousands of demonstrators were arrested, many reporting torture. According to Vyasna, 449 political prisoners are currently in custody.

Belarus announces retaliation after US sanctions

Belarus announced retaliatory measures because of the US sanctions. “We cannot ignore this unfriendly approach,” said Foreign Ministry spokesman Anatoly Glas on Thursday. Accordingly, the US will have to cut its diplomatic staff in Minsk, and the visa procedures for US citizens will be tightened. In addition, the Belarusian authorities revoked the work permit for the US Agency for International Development (USAID).

The US again imposed sanctions on nine state-owned companies in Belarus in April after Lukashenko ignored calls to release political prisoners. The measures went into effect on Thursday. The USA had already imposed sanctions on Belarus in 2006 following allegations of election fraud. In 2008 Lukashenko expelled the US ambassador to the country. In 2015, Washington suspended punitive measures and welcomed progress. They have been back in force since Thursday.

Ministry spokesman Glas described them as “illegal”. “They contradict international law and aim to put pressure on a sovereign state.” In addition, only “ordinary Belarusian citizens” suffer from the sanctions.

USA on the Protasevich case: “Relentless and intensifying repression against its citizens”

Last week Washington once again threatened to tighten punishments over the Protasevich case. In response to threats from Minsk on Thursday, Foreign Office spokesman Ned Price said in Washington that “unfortunately” the Belarusian authorities had brought relations to this point “through relentless and intensifying repression against their citizens”. He stressed: “Ambassador Fisher will be able to continue to support the democratic aspirations of the Belarusian people.” Julie Fisher was appointed ambassador to Minsk earlier this year, but has not yet been able to take up her post on the ground. (AFP / cibo) * Merkur.de is an offer from IPPEN.MEDIA.