Beirut is a model for Lebanon’s impotence, mired in chaos 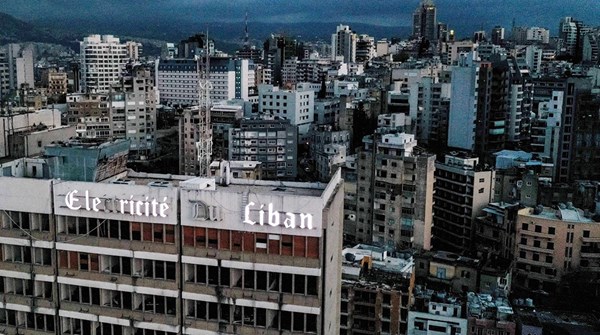 Lighting poles in Beirut remain extinguished, restoration projects are suspended, and potholes invade roads, until further notice. The capital’s municipality, which has the largest budget in the country between municipalities, no longer attracts contractors as the costs of projects continue to be paid in lost value in Lebanese pounds.
“No contractor wants to work with the municipality,” said a municipality official, who preferred not to be named.
At night, Beirut’s streets are plunged into darkness due to harsh rationing imposed by the EDL on the one hand, and lighting poles and tunnel lights are breathlessly awaiting their maintenance on the other hand.
Cars narrowly pass between potholes on some roads. At every intersection, drivers try to avoid an accident due to off or smashing traffic lights.
For about a year and a half, maintenance contracts for lighting, roads and traffic signals have not been renewed.
The Beirut municipality announced a tender to award a lighting maintenance project for Beirut’s streets and tunnels, but during two meetings held last month to receive bids, no one attended.
For decades, Lebanon has mainly suffered from a worsening problem in the electricity sector, which has dilapidated plants, and from long rationing hours, sometimes exceeding 12 hours.
The municipality of Beirut is currently owed 27 billion pounds, accumulated over 15 years for the benefit of the EDL, according to the official in the municipality.
Since the summer of 2019, in response to the worst economic collapse in Lebanon, the pound has gradually declined against the dollar amid a severe liquidity crisis. The exchange rate on the black market currently touches 12,000 dollars. As for the official exchange rate, it is still fixed at 1507 pounds.
Consequently, the contracts are no longer profitable amid the inability to import raw materials in dollars needed by the contractors, and the municipality’s inability to pay only in local currency.
“If we want to award projects for this year, according to the exchange rate that contractors want, there will be no money left in the treasury,” the official says.
In areas affected by the Beirut Port explosion on August 4, which caused the death of more than two hundred people and massive destruction in the nearby neighborhoods, the restoration movement remains slow, in light of the work carried out by a few contractors, whose number does not exceed the fingers of one hand.
The municipality, which signed the task of projects to support the damaged structures, was unable to complete the task. “We divided the damaged buildings into 15 groups,” the official confirms. “We succeeded in only restoring four groups.”
Although the tender was announced several times, no one showed interest in the other groups. As for the companies operating now, they began to complain that the contract that each of them signed at a value of two billion pounds, took place when the exchange rate was six thousand.
On the other hand, a new waste crisis appears inevitably occurring unless the municipality can find a solution with the “Ramco” company, which is committed to removing the waste.
The official says, “The contract is still valid with the company, but from time to time it threatens to strike and suspend work, because it wants to adjust the price.” The value of the contract, in Lebanese pounds, was equivalent to $ 14 million annually, according to Beirut Mayor Jamal Itani, but today it is about $ 2 million, according to the black market price.
In the streets of Beirut, which have been witnessing for many months, intermittent popular protests over the living conditions, they left their marks on the asphalt of the city, where tires are burned from time to time, and on its walls, where slogans are written insulting officials and demanding their resignation, people seem focused on their work … and their concerns.
Ahmed (32 years), a driver of a minibus, says: “Potholes in the center of Beirut, especially those left by burning tires, alone are enough. “The cost of repairing it is equivalent to 15 working days,” he added.

An international study: The risk of a "blast" explosion threatens millions of people