Beggars ask passers-by for help via a bank card 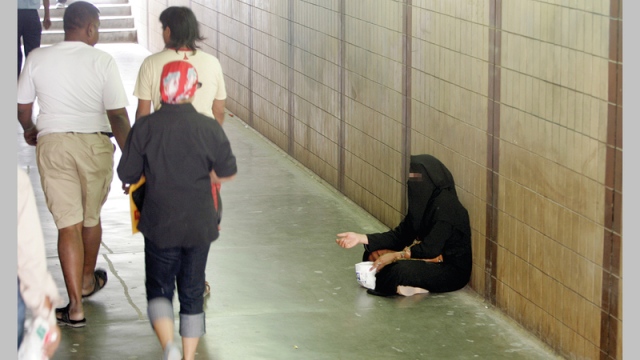 Finally, citizens and residents faced strange situations with beggars seeking financial assistance in any way, as they confirmed that they are trying to evade this category when they stop them in public places, claiming that they do not have cash, but they are surprised by the strange boldness of beggars asking them to withdraw with the bank card From an ATM machine.

For its part, Abu Dhabi Police called on members of the public not to sympathize with beggars in any way, stressing that begging is an uncivilized appearance and strange behavior on society, calling for combating begging by informing the police by calling the number (999) or the safety function (8002626) to take action the wish.

In detail, individuals have monitored some new methods of begging in public places since the start of the month of Ramadan. The presence of beggars in the vicinity of markets and in front of mosques and malls.

Citizens and residents responded to the awareness campaigns carried out by Abu Dhabi Police to combat begging, as Abdullah Al-Marzouqi suggested that anyone who facilitates, cooperates and helps beggars be punished, as he considered it an encouragement for this phenomenon.

Abu Hazaa said: “He tries to evade beggars when they stop him in public places, in an elegant way, by responding that he does not carry cash, but he is surprised by the beggar asking him to withdraw from the bank card from the automatic machine, considering that this is evidence that this category is targeting Defrauding the benefactors and seizing their money in any way in the holy month. ”

Abdullah Ahmed confirmed that the state has provided and established many charitable societies concerned with helping those who are unable, calling for intensifying monitoring of the whereabouts of beggars, especially around mosques after the Friday and Tarawih prayers.

(Umm Abdullah) stressed the importance of intensifying religious awareness of the subject of begging, as a group of individuals still help beggars with money, out of charity and not responding to the asker, ignoring the warnings issued by the concerned authorities about the danger of begging, considering that this group deprives people who are entitled to charity and zakat money.

For its part, Abu Dhabi Police warned the public against dealing with beggars, as they create unreal stories to defraud victims and extort money, through direct methods, or through social media and “chat” applications, stressing that the state has established official channels for charitable work, and the provision of aid is available. At charitable organizations and foundations, to ensure donations reach those who are entitled to them.

It confirmed that it is implementing an integrated security plan through police stations in Abu Dhabi during the month of Ramadan, and that control measures and preventive measures are taken by doubling efforts and intensifying the security presence of patrols in places where the category of beggars is expected.

It indicated its efforts to address this scourge, through inspection, awareness and seizure campaigns that contributed to reducing crime and eliminating behaviors that give a negative impression on society.

Abu Dhabi Police called on the public to the need for community members to cooperate with the police in promptly reporting the beggars, their whereabouts, and not giving them money, because this encourages them to continue the practice of begging.

The police warned against electronic begging, through the use of social media and e-mail, by receiving sympathy letters that include fabricated stories, and demanded that they be ignored and disbelieved, and that the competent authorities be informed to take the necessary measures regarding them.

Punishment for the crime of begging

The State Prosecutor’s Office stated, through a film material that it published on its social media accounts, the concept of the crime of begging, organized begging, and the penalty stipulated by law.

She explained that begging means begging with the aim of obtaining a financial or in-kind benefit in any form or means, as for organized begging, it means begging that is committed by an organized group of two or more people. It stated that whoever commits the crime of begging will be punished with imprisonment for a period not exceeding three months, and a fine of no less than 5,000 dirhams.

It is considered an aggravating circumstance if the crime of begging is committed and the beggar is of good build, or has an apparent resource to live, and the second case is if the beggar feigns sustained injury or disability, or pretends to perform a service to others or uses any other means of deception and deceit with the intention of influencing others to turn their sympathy. .

Whoever administers the crime of organized begging shall be punished by imprisonment for a period of no less than six months and a fine of not less than 100,000 dirhams.

The same penalty shall be imposed on whoever brings people in accordance with the Law on Entry and Residence of Foreigners to use them in the crime of organized begging, and the penalty shall be imprisonment for a period not exceeding three months and a fine of not less than 5,000 dirhams or either of these two penalties for everyone who participates in the crime of organized begging.

The State Prosecutor’s Office is carrying out an ongoing campaign to enhance the legal culture among members of society, raise the level of public awareness of the law and combat begging during the holy month of Ramadan.

• The police have warned against electronic begging, through the use of social media and e-mail.

Cristina Kirchner made it very clear: she is going to mark the limits of Martín Guzmán’s economic policy

Alberto Fernández exhibits too many signs of weakness