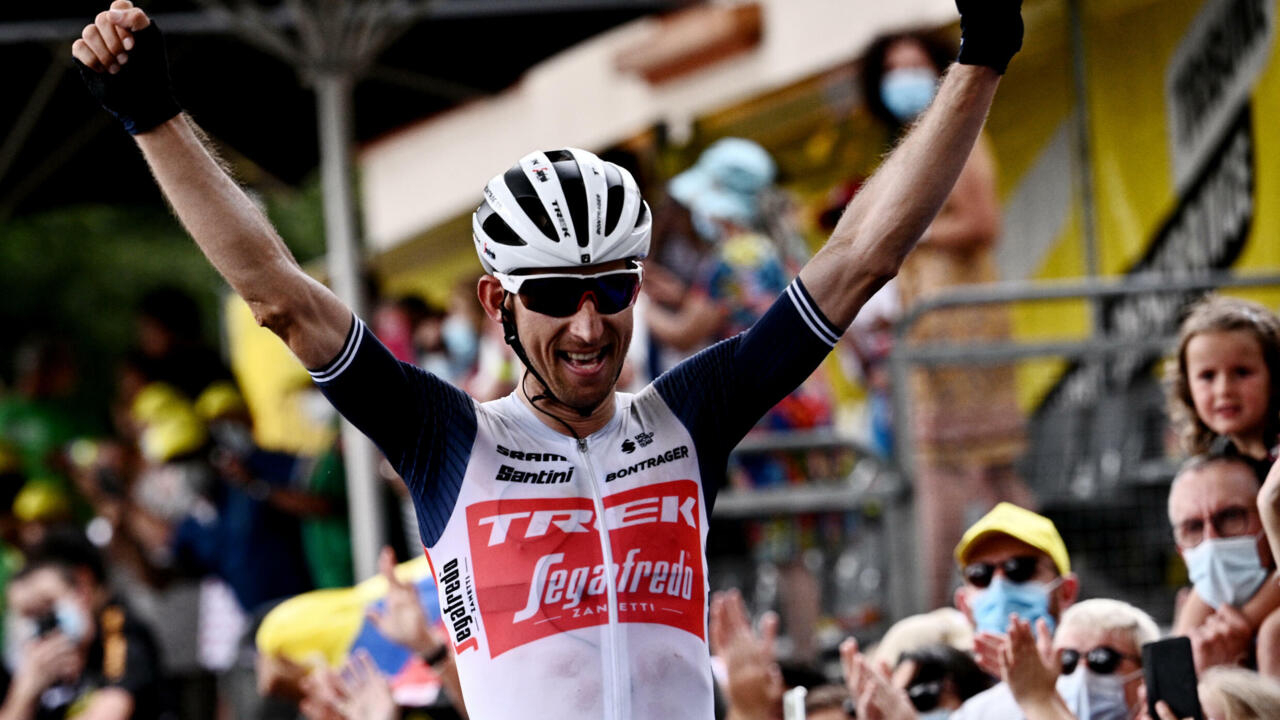 The Dutchman from the Trek Segafredo team offered himself victory in the mid-mountain stage at the entrance to the Pyrenees. He crossed the finish line in Quillan with more than a minute over Austrian Patrick Konrad and Colombian Sergio Higuita. The other winner of the day is the French Guillaume Martin (Cofidis) who, integrating the break, went from ninth overall, to second behind Tadej Pogacar. Rigoberto Urán is third and Richard Carapaz is fifth.

Last Wednesday, on the Mont Ventoux stage, the Trek Segafredo team came very close to victory, when Bauke Mollema finished third behind his teammate Kenny Elissonde and Belgian Wout Van Aert. Today, 34-year-old Mollema tried again and succeeded. The Dutchman, who had won a stage of the Tour in 2017 and the Vuelta España in 2013, used his experience to take the solo stage in Quillan. He arrived 1’04 behind Patrick Konrad (Bora Hansgrohe), who surpassed Sergio Higuita (EF Education – Nippo) by a few centimeters.

Bauke Mollema knew how to integrate the good escape that was the first difficulty of the day. The whole peloton knew that the stage profile was favorable for a victory for the adventurer because of his mid-mountain profile and his five mountain prizes. With 16 of the 23 teams participating in the Tour that had not won a stage, the candidates to integrate the break were numerous. The first half of the stage was marked by the large number of attacks from riders who wanted to escape. Until Lavelanet’s intermediate sprint at kilometer 76.7 won by Jonas Rickaert, no runner had managed to make a significant difference to the lot.

It was until the ascent of the second mountain peak of the day, the Col de la Croix des Morts (second category 6.8 km at 5.7%), that the escape finally came into existence. Wout Poels (Bahrain Victorious) and Michael Woods (Israel Start-Up Nation) went out in search of points for the mountain prize. Which allowed both riders to get closer to Nairo Quintana in the mountain classification. The Colombian from Arkea Samsic, king of the mountain until that moment, did not manage to escape.

Woods and Poels were overtaken by Mattia Cattaneo (Deceuninck Quick Step) on the ascent of the Col de la Croix des Morts, and just after the summit by a group of eight pursuers. Within this group were the French Guillaume Martin (Cofidis) ninth overall at 9’29, Bauke Mollema, and the Colombian Sergio Higuita. At the foot of the next ascent, the Côte de Galinagues (2.2 km at 9%) four more runners were on the run. There were the Colombian Esteban Chavés (Team BikeExchange) and the Spanish champion Omar Fraile (Astana – Primer Tech). With 60 kilometers to go, these 14 men had more than 3 minutes of advantage over the peloton.

Woods, new king of the mountain

Wout Poels crowned the mountain prize in front of Michael Woods on the Côte de Galinagues. The Canadian of the Israel Start-Up Nation took at this moment the leadership of the classification of the mountain. Despite a non-serious crash on the next downhill, Woods was able to finish the stage and don the red polka dot jersey. In this classification, the Canadian has 54 points, four more than Nairo Quintana.

Bauke Mollema decided to attack alone 43 kilometers from the finish line. Quickly the Dutchman took a difference superior to the minute on his companions of escape. On the last difficulty of the day, the Col de Saint-Louis (4.7 km at 7.4%), Sergio Higuita launched the counterattack accompanied by Michael Woods, Mattia Cattaneo and Patrick Konrad (Bora Hansgrohe). But the pursuers could never reach Mollema.

The great jump of Guillaume Martin in the general

The rider who performs an excellent operation in the general classification is the French Guillaume Martin. If he crossed the finish line 1’28 behind Mollema, the Cofidis climber arrived 5’25 before the group of favorites in the general standings. Before this stage, Martin was ninth at 9’29 behind the yellow jersey and at 4’11 from second place held by Rigoberto Urán. Now the Frenchman is second at 4’04 behind Pogacar while Rigoberto Urán is third at 5’18, Jonas Vingegaard (Jumbo Visma) fourth at 5’33, and Richard Carapaz fifth at 5’34. An order that could change again this Sunday with the fifteenth stage.

The Tour will reach its summit tomorrow with a 191.3 km high mountain stage between Céret and Andorre-la-Vieille. Four mountain prizes appear in the program of this fifteenth stage, two of the first category: Port d’Envalira (10.7 km at 5.9%) and Col de Beixalis (first category. 6.4 km at 8.5 %). The battle between favorites should take place on the ascent of Port d’Envalira. A height that culminates at 2,408 meters, where oxygen is scarce. Will Urán and Carapaz, both accustomed to the height of the Andes, be able to take advantage of this terrain?