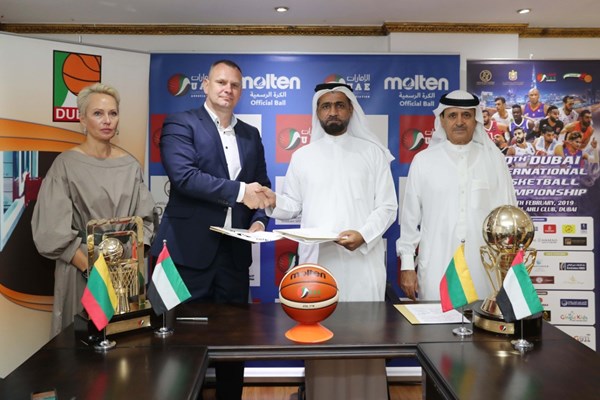 Ali His Excellency (Dubai)
The Basketball Association concluded a cooperation agreement with its Lithuanian counterpart, aimed at strengthening the partnership between the two federations, and working on exchanging experiences that are in the interest of national teams and for all age groups, especially since the basket of Lithuania ranks eighth in the global rankings, and fifth in European. The signing ceremony of the agreement, which took place at the headquarters of the Basketball Federation in Dubai, was attended by Major General “M” Ismail Al Gergawi, President of the UAE and Arab Basketball Federations, Yurata Ramoskina, Deputy Ambassador of Lithuania to the State, Salem Al Mutawa, Secretary General of the Federation, Mendoqas Spokas, Secretary General of the Lithuanian Federation, in addition to the President The Lithuanian Federation for the “3 against 3” competitions, Rolandas Skaskiris, and the signing of the agreement was witnessed by Muhammad Abdullah Al-Hajj, head of the Federation’s Executive Office, Muhammad Al-Hammadi, Executive Director, and Dr. Munir bin Al-Habib, Technical Director of the Federation. And Major General Ismail Al-Gergawi said: “We have a relationship. Strong in the Lithuanian basket, as its national team was one of the first to participate in the first edition of the Dubai International Basketball Championship, and through this agreement we look forward to strengthening the partnership, in a way that serves the game, whether in the Emirates or Lithuania. He added: “We aim to benefit from the great experiences that the Lithuanian basketball enjoys, especially in the development of the Sunni sector, the referees sector and the national teams, whether in traditional competitions with teams of five players, or in 3-on-3 competitions, as the basket is the popular game. The first in Lithuania ». In turn, the Director General of the Lithuanian Federation, Mindaukas Spokas, said: “The Lithuanian Federation will put all its expertise in the service of the Emirati basket, and we look forward, next June, to an invitation to the UAE Federation to participate with us in the celebration of the 100 years of the founding of Lithuanian basketball, in a visit that will allow them to see On the ground, about our work programs that cover all sectors, laying foundations and strategies to achieve the benefit of the signed agreement, whether by establishing joint camps, especially in the age group, which is the cornerstone of the game’s development.