Barcelona faces a transitional Mobile with the support of Felipe VI, Pedro Sánchez and Pere Aragonès 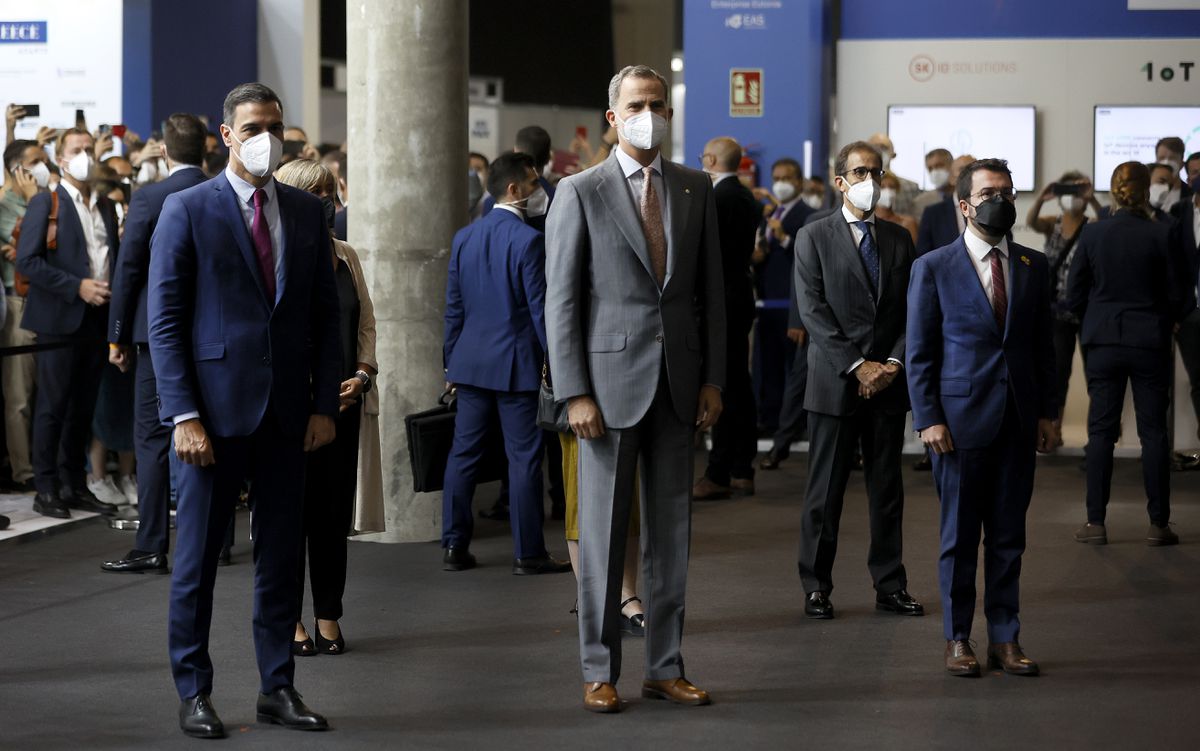 They had dinner together first. And this Monday they met again for more than an hour at the private opening of the Mobile World Congress in Barcelona. In less than 24 hours Felipe VI, the President of the Government, Pedro Sánchez, and that of the Generalitat, Pere Aragonès, have shared a table and corridors at the Fira de Barcelona in an atmosphere of normality. Nothing of the rudeness of other years, Quim Torra style. They have all taken their seats despite the fact that, as usual, neither Aragonès nor the mayor of Barcelona, ​​Ada Colau, have come to receive the King outside of Fira. And it is that this year, more than any other, institutional support is necessary. The congress faces its transition edition with few attendees. “We expect about 35,000 people. We reconnect, we see each other again, we go back to business and we go back to Barcelona ”, said this Monday the head of Mobile, John Hoffman.

The smallest and most fragile edition of the mobile telephony congress has started this Monday with great organizational discipline to face the pandemic. The Fira de Barcelona de L’Hospitalet de Llobregat site, which in the last editions of the congress had housed up to 109,000 people, has become a security machine against covid to host, this time, some 35,000 people. The Mobile thus begins a very complex but highly anticipated edition, since its sole celebration shows the starting point for a certain recovery of economic activities. Upon the arrival of the King, he was greeted outside the fairgrounds by the Ministers of Industry, Reyes Maroto, and of Economy, Nadia Calviño, the Government delegate in Catalonia, Teresa Cunillera, the head of the GSMA, John Hoffman, and the president of the Board of Directors of Fira de Barcelona, ​​Pau Relat.

“We already have it here. Catalonia and the Generalitat have always been with the Mobile ”, said the vice president of the Generalitat, Jordi Puigneró, after showing the possibilities of 5G technology, in the Catalonia pavilion. For Aragonès, Mobile is the time to return to normality: “A safe Mobile that offers opportunities for Catalonia”. “We have finally been able to see people face to face. And although there are not many people, we do hope to do business ”, explained Liad Iluz, who is part of the startup Israeli Picup. The first day of the Mobile has nothing to do with the precovid editions. Few people everywhere. All with the same feeling of success: we have come this far.

The first thing that congress attendees have encountered is a complex but well-organized system to enter. 2,184 Mossos d’Esquadra agents are in charge of security inside and outside the enclosure. 170 workers, including health workers, organization staff and cleaning workers, manage the queues and waiting areas to perform an antigen test at the 80 authorized points, an essential requirement to obtain the Mobile accreditation. After waiting 15 minutes in a constantly disinfected space and after obtaining a negative result in covid-19, the assistant can enter.

In this edition, the vast majority of those attending the congress are local. Foreign presence, so common in recent years, is very sporadic, given the mobility restrictions that still exist in many countries. The hotels in Barcelona have not received significant reservations and continue with data similar to those of the last two weeks: 40% of the establishments open and an occupancy of 35%. In addition, companies as important as Google, Facebook, Samsung, Xiaomi, Ericsson, Sony or Nokia do not participate in person and have not sent their workers to Barcelona.

The absence of companies is, in some cases, tangible. Some companies, despite not coming, have decided to maintain a space in the congress, since in any case the organization was not going to reimburse the investment of having hired it. This is the case of Ookla, which occupies an important central space in the hall, but is closed, and the walls of the stand read “we miss you”. This year, the largest exhibitors in the room are those of the Telco companies (which occupy the traditional Ericsson space, this year absent, and in which they have installed a stage where, among others, Rosario and Bon Jovi will perform) , Huawei and ZTE, practically the only stalls where it is possible to find exposed mobile phones. For some years, Mobile has ceased to be the congress in which the new generations of mobile phones were presented (which now each brand presents in its own virtual events) to become a space for debate on the challenges and new forms of connectivity.

Some of the most striking novelties that have been seen during the first day of the Mobile have been the smart shirt YouCare, from ZTE, which sends data on the health of the person who wears it; watches, glasses and other everyday items connected to the Internet; the presentation of a hologram with 5G technology, by the Mobile World Capital; or the control of a ship in the port of Valencia also through 5G.