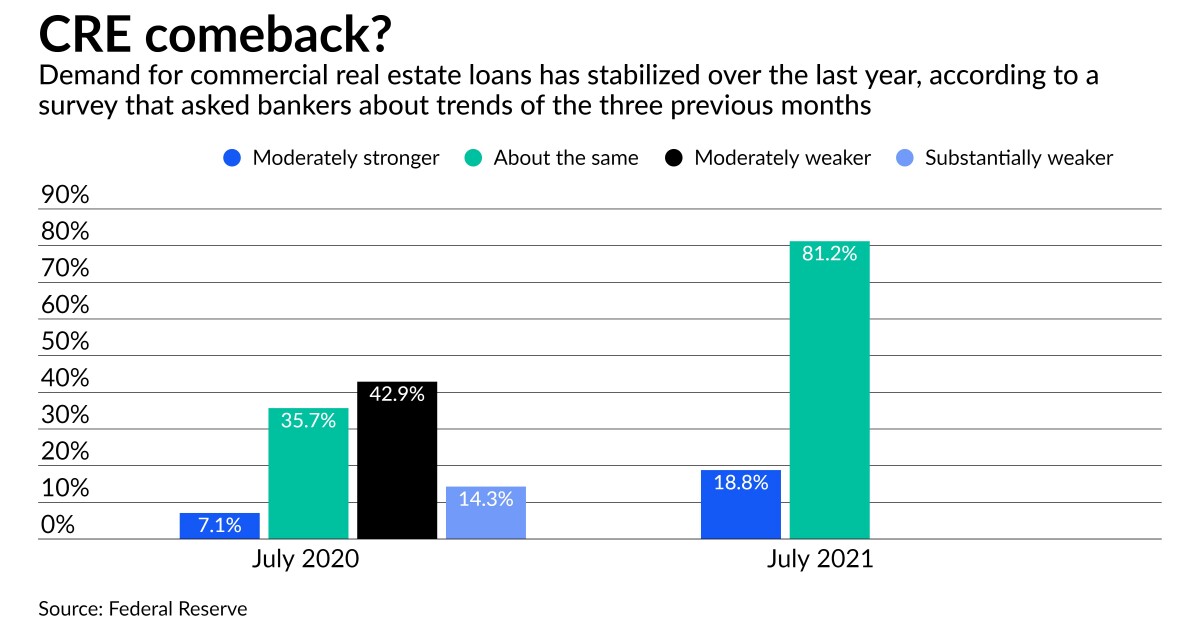 Bankers aren’t yet calling it a comeback, but the industry is welcoming some positive recent signals in commercial real estate lending, which has been hit particularly hard by the COVID-19 pandemic.

On Tuesday, the Mortgage Bankers Association said that it expects about $ 578 billion of commercial and multifamily real estate-backed loans to close in 2021, which would be a 31% increase from last year, and approaching the $ 601 billion originated in 2019.

And last month, in a survey conducted by the Federal Reserve, no banks reported weaker demand for commercial real estate loans, while around 18% said that demand was moderately stronger over the previous three months.

“Things have rebounded a little quicker, even though we are all a little worried about the delta variant,” said Brian Stoffers, global president of debt and structured finance at the commercial real estate firm CBRE.

In July 2020, more than half of banks surveyed by the Fed reported that demand for commercial real estate loans was either moderately or substantially weaker than three months earlier. The more upbeat findings a year later are a sign that the situation has stabilized, even if loan demand has not fully recovered to where it was before the pandemic.

During second-quarter earnings calls, executives from banks of all sizes offered reasons for at least a bit of optimism. For instance, JPMorgan Chase reported a small uptick in loans for multifamily building.

“While the overall outlook for commercial real estate continued to improve, we remain focused on the areas most impacted by the pandemic,” Wells Chief Financial Officer Mike Santomassimo said during a July 14 call with analysts.

Zions Bancorp in Salt Lake City is continuing to exercise caution, growing its commercial real estate book by just 0.4% from the previous three months and 1% from one year ago. But the bank’s construction loan portfolio increased by 5.4% during the second quarter alone.

In an example of the $ 87.2 billion-asset bank picking its spots, Zions CEO Harris Simmons told analysts last month that he expects owner-occupied commercial real estate “to see some decent growth.”

ServisFirst Bancshares in Birmingham, Alabama, reported a 17.3% quarter-over-quarter increase in construction loans to more than $ 782 million. That growth was among the bright spots in the $ 13.2 billion-asset bank’s commercial real estate business.

“We have a number of projects underway where we expect substantial draws, and of course, we do expect line utilization just to improve from inflationary effects of higher prices for steel, lumber and many other, you know, raw materials,” ServisFirst CEO Tom Broughton said during a July 19 call with analysts.

The bulk of the recent pick-up in commercial real estate lending appears to be happening at banks with between $ 10 billion and $ 100 billion in assets, said Matt Anderson, managing director at Trepp, citing preliminary second-quarter data. Smaller banks that have historically had relatively large concentrations in the sector have been slower to bounce back, he said.

“In a certain sense it’s a bullish indicator because the mid-to-large sized banks can get more aggressive and have an impact on the market overall, but having said that, when you total up the thousands of banks under $ 10 billion, it’s a little bit surprising that they haven’t picked up yet, ”Anderson said.

TO recent survey of bankers by IntraFi Network shed light on smaller banks’ squeamishness about the broader real estate market, which could help explain why they are exhibiting more caution in commercial real estate lending than their larger peers. Commercial real estate loans are used to finance the construction of new homes, but at banks with less than $ 1 billion in assets, about half of the executives surveyed in July saw the US housing market as a serious risk.

Still, there are signs that construction lending is leading the way toward a broader rebound in CRE lending, as builders scramble to address a housing shortage, according to Anderson.

“That’s interesting especially because in typical cycles, construction lending really falls hard and then recovers, so this time around it didn’t dip a whole lot, it just slowed down and has been picking up again,” Anderson said.

No analyst or industry expert dared a guess about when the CRE market might look more normal, especially as the delta variant continues its charge in much of the country. But for now, many in the industry are accentuating the positive.

“The momentum is certainly building, and we’re seeing a strong look into the second half,” Stoffers said.

“Nothing but respect”: Bucks NBA champion again after 50 years