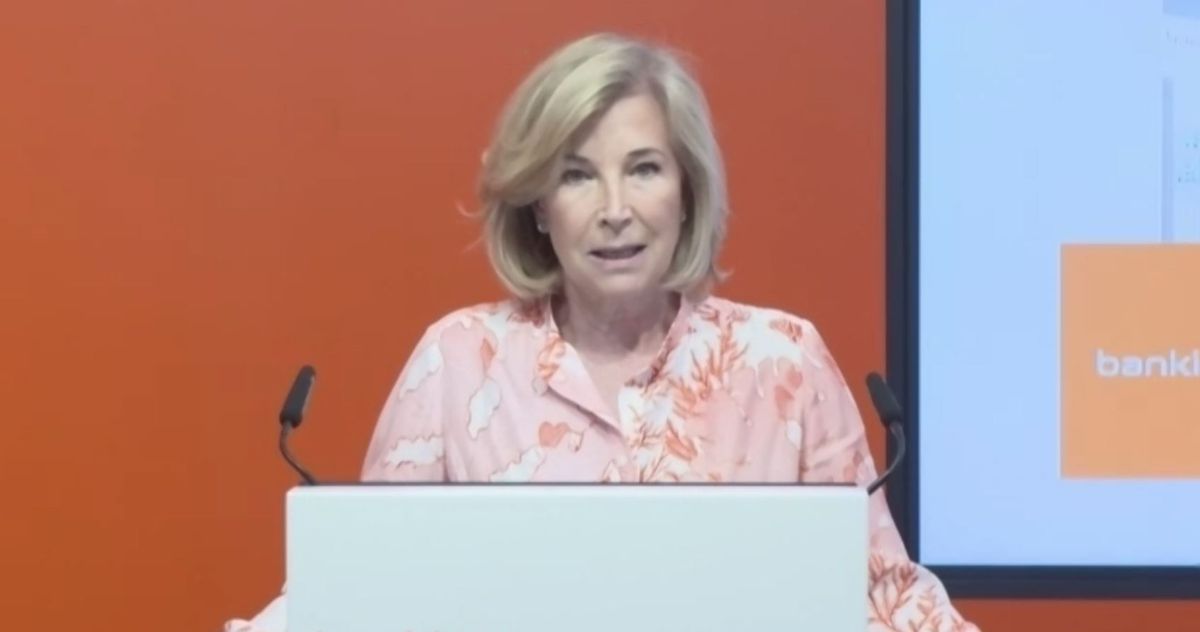 The CEO of Bankinter, María Dolores Dancausa, was optimistic this Thursday with the evolution of the Spanish economy for the rest of the year (predicts a GDP growth of 6%), with the increase in loans without increasing delinquencies ( now it is 2.3%) and, therefore, with the return to the distribution of dividends.

The European Central Bank (ECB) vetoed entities in mid-2020 from distributing part of the benefit to reinforce their capital in the face of the crisis caused by the pandemic. Next week you will have to communicate if you remove this impediment, although Dancausa already takes it for granted. “There are no reasons to maintain the veto for Bankinter: we are solvent, profitable and predictable. We will once again distribute 50% of the profit in cash among our shareholders, ”he said.

Regarding the results, Bankinter registered a net profit of 1,140.3 million euros during the first half of this year, which includes an after-tax capital gain of 895.7 million from the difference between the book value of Línea Directa and the market value of this company prior to its IPO, which had place on April 29, according to the accounts registered with the CNMV. Without taking this capital gain into account, the net profit would be 244.5 million euros, 124.1% above the first half of 2020. This figure includes the 39.9 million net profit generated by Línea Directa during the four months that the company remained in the perimeter of the bank, according to Dancausa reported this Thursday.

If capital gains are included, the bank would have presented a return on equity or ROE “of 27%”, which it considers “not very realistic”, for which it has published an ROE of 9.5% in June without that profit. extraordinary and that significantly exceeds the 7.6% of the first semester of 2020.

The capital gains “will not be part of the profit calculations on which the dividend distribution will be made and will reinforce the balance sheet,” the banker also warned, highlighting that Línea Directa will continue to contribute dividends to the bank for almost 18% that it still has in the insurance company after its jump to the stock market.

Bankinter restarts its life without the insurer, which also created and relaunched Dancausa from scratch. He had 100% of the capital and now he keeps 17%. Dancausa did not want to give profit targets for 2021, but it did promise that in 2023 the bank would achieve the same result as in 2019, when it had Línea Directa. This would mean exceeding 550 million with the pure banking business.

He defended that Bankinter’s results are not what is “called a hit” but the result of a “recurring” result, where it has also been revealed that “the enormous hidden value of Línea Directa housed as a high-power company”, which now It totals almost 896 million and previously contributed significantly to the results.

“We need degrees of freedom”

The CEO of Bankinter, this Thursday based economic optimism on the arrival of European funds, although she added that for the improvement to arrive “society needs to have degrees of freedom so that all positive factors bear fruit”.

Asked if she believed that there could be restrictions on individual or business freedom, she stated that she did not want to criticize anyone, and that she advocated that “business initiative be promoted, which allows us to generate employment and thus combat the main problem we have in Spain “, To cement the recovery, warning about the risks of encouraging the” culture of subsidy “and, even, of a” triumphalism “that” could make us lower our guard. “

Dancausa stated that we have to “accept” that the transition from problems to recovery “is slower and more laborious than the transition” from a good situation to a bad one, which also “can be very abrupt, as this pandemic has shown us.”

The Bank of Spain’s Claims Report for 2020 placed Bankinter among the entities that had more complaints than they would have had due to their market share. He also cited the entity that least often accepted the supervisor’s criteria when it was in favor of the client.

Asked about this question, Dancausa explained that the bank “takes great care of the quality of service with its clients and most of the time we solve problems before arriving at the Bank of Spain. For this reason, few of those who come to this instance believe that they are right. Of the more than 20,000 that the supervisor received, only 1.5% of the claims corresponded to Bankinter ”, he concluded.

Considering only the results of the purely banking activity, the profit before taxes was settled as of June 30 of this year with 287.6 million euros, compared to 61.8 million in the first half of 2020 and compared to 344 , 8 million in the same period of 2019, although in this case an extraordinary entry of 57 million was included from the acquisition of EVO Banco, as explained through a statement registered with the CNMV. This means, according to the bank, that, in comparable terms, the profit before tax from banking activity in the first half of 2021 is close to the level obtained before the pandemic.

Bankinter assures that at the end of the first half of this year it maintains the growth trend of its recurring business already exhibited during the first quarter of the year, successfully solving the still unresolved difficulties of an economic environment that continues to be weighed down by the effects of the pandemic . “This boost in commercial activity, where new businesses and geographies are increasingly being added to the good evolution of traditional lines, results in improvements in all account margins, ratios, balance sheet data, as well as as in the profit for the period ”, he highlighted.

Improvements in all margins

All the margins of the account show higher figures not only with respect to those of the same period of 2020, but also with respect to the first semester of 2019, demonstrating the entity’s capabilities to fulfill its strategic plans to compensate for the absence of benefits from Línea Directa with the strength of the banking business in a period of approximately three years.

The interest margin reached 639.4 million euros, being 4.4% higher than in the same period of 2020, while the gross margin totaled 914.7 million euros in the same period, 6% more. An important part of this figure, almost 70%, comes from the interest margin, while the commissions account for 29% of the total of this margin, coming mainly from value-adding businesses such as asset management (92 million euros). euros in commissions, 23% more) or operations with securities (59 million, + 18%).

Regarding the accumulated efficiency ratio, it fell to 44.9% compared to 45.6% a year ago. Regarding the main ratios, the return on equity, ROE, is 9.5% compared to 7.6% in the first half of 2020, which was weighed down by higher extraordinary provisions. This ratio, which places Bankinter “at the forefront of the sector in profitability”, is an adjusted ROE that excludes the capital gains of Línea Directa, although it includes the four months of recurring profit for this company. Regarding solvency, it remains at “optimal” levels, with a CET1 capital ratio fully loaded at 12.2%, much higher than that required by the ECB, which is 7.68%.