Bani Yas flying the “summit” in the “Arab Gulf” 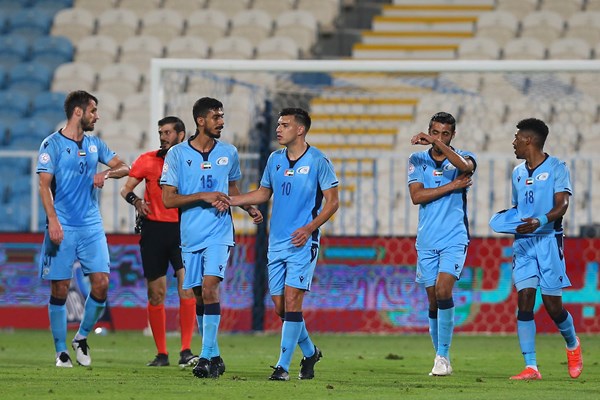 Bani Yas took the lead in the Arab Gulf League temporarily, after defeating Hatta 1-0, in the match that was held today «Saturday», in the start of «Round 22», to raise «Al Samawi» his score to «48 points», one point difference from Al Jazeera The one who meets Al-Wahda tomorrow (Sunday) in the “Abu Dhabi Derby”, while the “hurricane” remained in last place with 8 points, and the winning goal for Baniyas came from a powerful shot by Nicolas Jimenez in the 28th minute, which was enough to collect the full points.
Al-Wasl tied with Sharjah 3-3, so that the “Emperor” raised its score to 34 points in seventh place, and the score of “Al-Malik” became 41 points in third place.
Al-Wasl advanced with a goal by Figrido from a scissor game in the 15th minute, and the player himself returned, and strengthened his team’s lead with a header in the 41st minute, and Wilton Suarez reduced the difference to Sharjah with a goal in the 49th minute, to respond to Ali Salmin quickly with the third goal to reach with a powerful shot, rebounded from the crossbar in the The 50th minute, but Saif Rashid reduced the difference again with a second goal for Sharjah in the 76th minute, and Salem Saleh equalized for “the king” in the second minute of the calculated time instead of lost.
Shabab Al-Ahly continued their series of positive results, by beating Al-Dhafra 2-1 at their stadium, to raise their score to 40 points in fourth place, and “Al-Faris” remained 20 points in eleventh place, scoring the two goals of “Al-Fursan” Cartabia from the 11th minute penalty kick, and the Argentine Pedro by mistake. A goal was reversed in the 67th minute, while Frenchman Idriss Mazzawiani scored the goal of Al Dhafra in the 53rd minute.
For its part, Ittihad Kalba won an impressive 2-1 victory over Khorfakkan, to raise the “Tigers” score to 32 points, as its best outcome during the history of its participation in the league.
Khorfakkan advanced with a goal by Dudu in the first minute of the calculated time instead of lost, and the two “substitutes” turned things in favor of the Kalba Federation, with Ahmed Amer scoring in the 84th minute, and Sultan Adel in the 89th minute.

Jury from Yo soy Chile to ‘José Feliciano’: “It was not your best presentation”

France extends its “reinforced braking measures” to three other departments