Ballot in Peru: ‘The Forgotten People’ arrives in Lima to defend their vote for Pedro Castillo 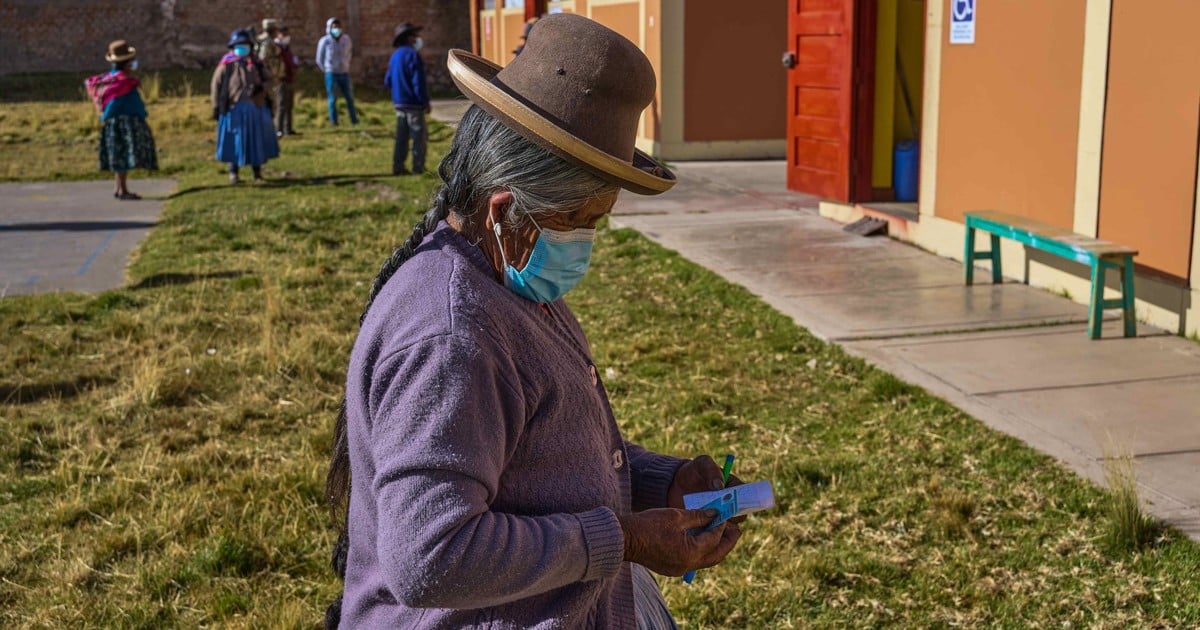 “On the coast, mountains and jungle, Pedro has already won! “. The phrase is repeated with anger among peasants dressed in their typical costumes and whip in hand who have arrived in Lima from the Peruvian highlands, on the border with Bolivia, to defend their vote for the leftist Pedro Castillo.

As right-wing leaders ask to annul the second presidential round held 10 days ago, voters in the poorest areas of the country affirm that are willing to “defend” your choice by the 51-year-old rural teacher, a native of Cajamarca, 900 km north of Lima.

“We are outraged by all the tables that have challenged us, we are the forgotten people, that’s why our protest“Estela Anampa Gómez, 52, laments in statements to AFP.

Peasant men and women they carry out a permanent vigil in front of the headquarters of the Castillo party, Peru Libre, in the historic center of Lima. They say they will remain there until the Electoral Tribunal proclaims him the winner.

An Aymara woman casts her vote at a school in the town of Plateria, in the department of Puno (Peru). Photo EFE

“We are going to stay Until the last consequences here, “Néstor Jafet Choque López, covered by a cherry poncho and an Andean hat, told AFP in the cold of Lima.

Choque identifies himself as lieutenant governor of Atuncolla, a small Aymara district of 5,000 inhabitants located at 3,800 meters above sea level in the Puno region, which voted en masse for Castillo.

“We have already elected our president of the republic who is Pedro Castillo Terrones, we are here to defend our vote for a just cause“He added without letting go of his whip.

The peasants all wear the colorful Peruvian “chullo”, an alpaca wool cap with ear flaps traditional of the Andes, and its image contrasts with the urban and gray landscape of the streets of Lima, a capital facing the Pacific Ocean of 9.6 million inhabitants.

Aymara women arrive to cast their vote at an electoral college, today in the town of Plateria, in the department of Puno (Peru). Photo EFE

The delegation descended in buses the almost 4,000 meters of height for more than 20 hours until your arrival in Lima.

The official scrutiny of 100% of the voting tables gave Castillo 50.12% this Tuesday, 44,058 votes more than those obtained by Keiko Fujimori, but the National Elections Jury, the highest electoral court, still has to resolve the challenge requests of the right-wing candidate before proclaiming the winner.

Castillo captivated the Andean peoples with its motto “No more poor in a rich country”, which he repeated like a mantra at every rally and sparked hysteria among economic and political elites.

“If they decide other elections it would not suit us. From the highest lake in the world (Lake Titicaca), we say how it is that we have had so much wealth and we are poor. We want change“Anampa said sitting on a sidewalk on the colonial Paseo Colón, where Peru Libre’s headquarters are located.

The testimonies follow each other with the same impetus, against any decision of the electoral tribunal other than the cause they defend.

“We have come from the border with Bolivia to the capital to defend our vote. Our vote has been humiliated“, says Rivelino Cahuana Quispe, who came from the province of Moho, in Puno, on the shores of Lake Titicaca.

“Indigenous and Aymara peoples we are joining to enforce our votes, “said this man, who participated in a peaceful protest in front of the electoral tribunal.

“We come in the fight of our votes, enough that they trample us. We are going to stay until it is promulgated that the president is Pedro Castillo, “promises Carmen Yachi Fernández, who traveled to Lima from Huancavelica, one of the poorest regions of Peru, to Lima.

Seven million Peruvians, out of a total of 33 million, they live in rural areas.

The Puno region, whose population is mostly Aymara, It is one of the main bastions of Castillo, according to official results.

In this region it obtained 89.26% of the votes, a percentage that places him as the candidate with the most popular support in the last three presidential elections.

The sociologist Ernesto Valdivia believes that if the South supported Castillo it is because it tacitly is asking for profound changes politically and socially.

“People are upset with the political class. First for all the known acts of corruption and second there is a centralism that forgot them, In every sense of the word. Pedro Castillo picked up that disappointment, “Valdivia was quoted as saying by the newspaper. The Republic.

According to Valdivia, Castillo is the character that represents the forgotten Peru at this time, although he warned that those same popular sectors could turn against him if he disappointed them amid so many expectations.