Ballot in Peru: an exit point gives a technical tie between Keiko Fujimori and Pedro Castillo with a minimal advantage for the right-wing candidate 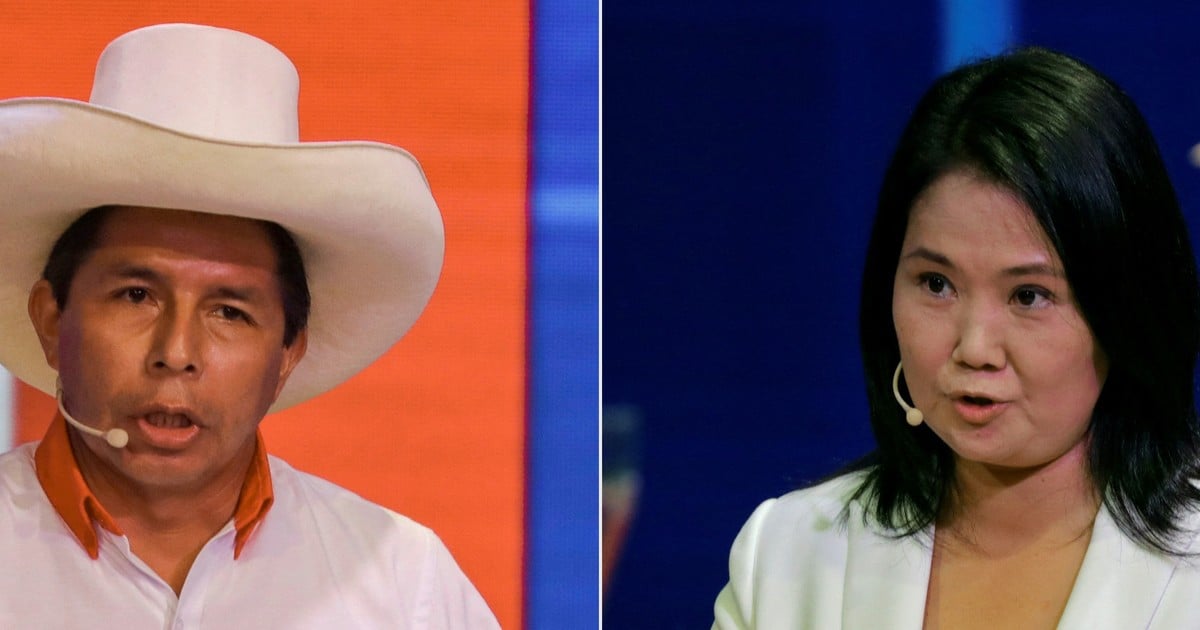 According to an exit poll by the Ipsos company, the leftist candidate Pedro Castillo and the right wing candidate Keiko Fujimori are tied, but with a slight advantage for the right-wing candidate.

With messages of unity Fujimori and Castillo They promised that they will respect whatever the result this Sunday of one of the closest presidential elections in the history of Peru, in a country devastated by the pandemic and a fierce political crisis.

With antagonistic projects, the rural school teacher and the daughter of the imprisoned former president Alberto Fujimori arrive tied in the polls for this ballot, after a campaign marked by uncertainty and the exacerbation of fears, which raised the price of the dollar on Friday to a record of 3.9 soles.

Castle headed in the morning a family breakfast in the roofed inner courtyard of his house in the hamlet of Chugur, in the northern region of Cajamarca, and he went to vote at noon in the nearby town of Tacabamba, followed by the streets by hundreds of locals.

“I have made a decision, I will not be in Lima for the health of my parents“, announced the candidate after voting at the Simón Herrera school, canceling his plan to travel to the capital to await the results.

“We will be respectful as soon as there is an official report “of the vote count, the 51-year-old candidate also indicated, dressed in a brown coat and white hat with a high crown, typical of the peasants of Cajamarca.

His rival, who participated in a family breakfast on the slopes of a hill in a poor neighborhood in the Lima district of San Juan de Lurigancho, He also indicated that he will recognize the results of the ballot, something he did not do in 2016, when he lost to banker Pedro Pablo Kuczynski.

“From now on I can say that whatever the result, I will respect the popular will as it should be”, promised the 46-year-old candidate, that the possibility of becoming the first president of Peru is at stake for the third time.

Fujimori, who voted in the afternoon in the Lima district of Surco, he congratulated “the grandparents and grandmothers“for having gone to vote.” They do it thinking about their children and their grandchildren, “he said.

Whoever wins, Peru will continue to maintain a conservative profile with the refusal of both to legislate on abortion, homosexual marriage and gender identity.

Both candidates spent the last hours with their families, after closing their campaigns on Thursday in Lima at rallies with hundreds of followers piled up, while the pandemic does not give truce. Peru this week had the highest mortality rate in the world due to covid-19, after adjusting the figures, and accumulates almost two million infections and more than 180,000 deaths.

Castle concentrates support in rural areas from “deep Peru”, like his native Cajamarca, but there are Peruvians fearful that the country will become a new Venezuela who will vote for Fujimori as “the lesser evil.”

“I don’t even want to vote, for me the two do not deserve the vote, But I have a panic about Castillo, so I vote for Keiko, “said Lima carrier Johnny Samaniego, 51.

Anyone who wins will have a huge challenge, as you must take urgent measures to overcome the pandemica, economic recession and political instability, dealing with a fragmented Congress, corruption and poor public management.

If Fujimori wins, “it is not an easy task, given the mistrust that his name and that of his family generates in wide sectors. It will have to quickly calm the markets, and generate measures that allow the reactivation, “political scientist Jessica Smith told AFP.

And if Castillo wins, he must “show independent leadership” of his party leaders and “consolidate a parliamentary majority that will allow him to carry out his ambitious program,” he added.

Meanwhile, analyst Luis Pásara told AFP that “It will take time to calm the waters, because the polarization is fierce and there is an environment of social conflict “.

Some 160,000 soldiers and policemen were deployed to guarantee the security of the electoral process.

On this day also One million Peruvians residing in 75 countries voteds, including 140,000 in Venezuela, Chile, Paraguay and Aruba who were unable to do so in the first round due to restrictions due to the pandemic.

The new president will take office on July 28, the day that Peru commemorates the bicentennial of its independence, replacing the centrist interim president Francisco Sagasti, who urged his compatriots “to scrupulously respect the will expressed at the polls.”