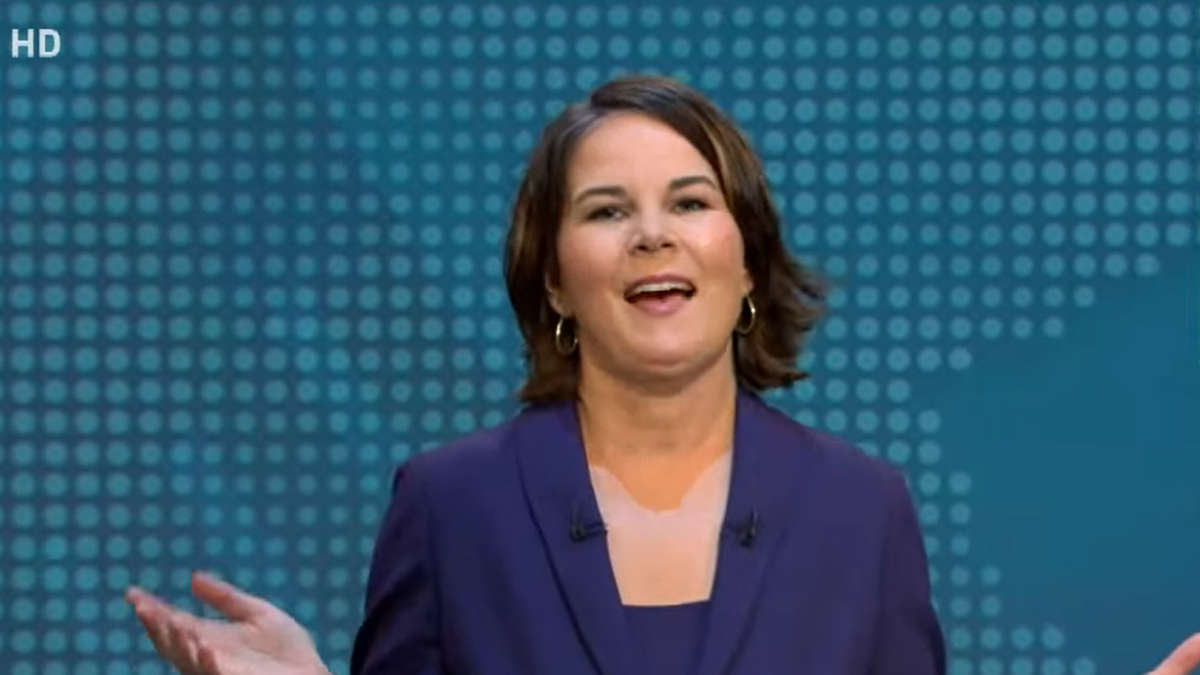 At the end of the Chancellor Triell, the candidates have one minute to address the voters. The candidates from the Union, SPD and Greens tried to score.

Berlin – The Union candidate Armin Laschet has to peep in his Triell closing words. The very word that he would like to claim for himself seems to be missing at this moment: “steadfastness”. That doesn’t seem to go down very well with viewers. The lightning poll after the Triell puts Laschet in third place. The Green candidate Annalena Baerbock, who even steps in front of her desk for her closing remarks, does better.

Olaf Scholz (SPD), who seems firmly anchored in his place, is still best received. In their last words of the first triall of the chancellor candidates, Baerbock, Scholz and Laschet address the citizens directly. You each have one minute to create your call for elections for the Bundestag election. Laschet exaggerates a little – but that’s not the only reason why there is criticism of Laschet’s closing words.

Annalena Baerbock is the first to introduce her final statement with a promise of change. Despite three candidates, there are only two directions to choose from, according to Baerbock: “The ‘business as usual’ of the grand coalition – wait and, if in doubt, duck away. Or: let’s create a real departure now! A policy that will really make things better in the future! ”To give her words strength, Baerbock unexpectedly steps past the desk and walks towards the camera – towards the audience. It promotes education, fair wages and climate protection.

Baerbock’s proactive approach has been well received by some Twitter users. “A really good final statement from Annalena Baerbock at the Triell – including breaking through the fourth wall and also facing the spectators spatially”, comments Till Westermayer from the parliamentary group of the Greens in the Baden-Württemberg state parliament on Twitter. The phrase of the fourth wall originally comes from the theater, when an actor picks up the audience through the virtual fourth wall and addresses the audience directly. An attempt that all candidates for chancellor have tackled in the TV trio, but Baerbock seems to have succeeded better with her step in front of the desk. “Laschet screwed up his closing words at Triell: The wind of change is blowing in his face, but he wants to stand firm, stayed behind the desk like Scholz. Baerbock stepped in front of the desk, walked forward and with a friendly, winning look at the audience. Strong.”

#Laschet has his closing words at #Triell screwed up: The wind of change is blowing in his face, but he wants to stand firm, stayed like #Pride behind the desk. #Baerbock stepped in front of the desk, walked forward and with a friendly, winning look at the audience. Strong.

Olaf Scholz also starts thematically and not with himself in his closing statement: “It’s about you in the upcoming federal election and it’s about the future of our country. In the last few months we have seen what we are capable of – in terms of solidarity and cohesion in this society. And it is my great wish that this also applies to the future. ”Scholz sees the questions of greatest importance in two points:“ I want us to live in a society of respect, ”said the SPD candidate. Respect also for every lifetime achievement. That is why we need better wages, a higher minimum wage and a stable pension. “And secondly, it’s about the future of our country, about modernization. We have to stop man-made climate change, ”explains Scholz matter-of-factly. He is available for this. “For this I want to be the next Federal Chancellor and serve you,” he says modestly.

Scholz also received praise for his objectivity from an unusual angle: “Annalena Baerbock and Olaf Scholz with a strong conclusion, Armin Laschet covered with nonsense,” comments Jule Wenzel, spokeswoman for the Greens in Duisburg after the Triell on Twitter.

Triell of the Chancellor Candidates: Armin Laschet has to poke at the final word

Armin Laschet should also explain why he is the right one for the Chancellery – and starts with Annalena Baerbock. The competitor praised him in an honest way that touched him: She appreciated his “steadfastness in headwinds”. But the chancellor candidate does not only want to defy the headwind. Also the wind of change: “Don’t we all feel the wind of change blowing in our faces? At such moments we need … ”Then follows the pause. With narrowed eyebrows, Laschet squinted – a moment too long for a break from art – at his desk, on which the prepared speech is probably lying.

“Steadfastness, reliability and an inner compass,” he finally continues. That is his offer to the citizens. That is the offer of the Union: “Stability and reliability in difficult times. This has shaped us from Konrad Adenauer to Helmut Kohl to Angela Merkel. The CDU team wants to ensure stability. ”It is no coincidence that the“ Wind of Change ”is a clear allusion to the so-called soundtrack of the fall of the Wall at the end of the Cold War. “The wind of change” by the German band The Skorpions, who celebrated a new era of new beginnings and freedom with their hit at the end of the 1980s.

Triell: Laschet cannot compensate for the low in the survey

In the Chancellor Triell on Sunday evening, the Union candidate Armin Laschet (CDU) was unable to counteract his current downward trend in the polls. However, CSU boss Markus Söder and party comrade Friedrich Merz proclaim him the “Triell winner” – who reaped a lot of ridicule on Twitter for this.