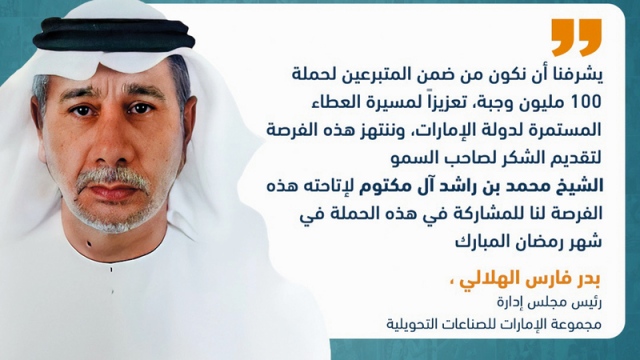 The businessman and Chairman of the Emirates Group for Manufacturing Industries, Badr Faris Al Hilali, announced his donation of one million dirhams to support the 100 million meals campaign, the largest campaign in the region to feed food, which aims to provide food support to marginalized groups and needy families in 30 Arab, African and Asian countries, during blessed month of Ramadan.

Al-Hilali confirmed that his contribution to the donation to the 100 million meals campaign comes out of constant eagerness to participate in supporting charitable initiatives that we have become accustomed to for many years from His Highness Sheikh Mohammed bin Rashid Al Maktoum, Vice President and Prime Minister of the UAE and Ruler of Dubai, may God protect him. And which he releases to extend a helping hand, goodness and assistance to every needy person in all countries around the world.

He said: “We are honored to be among the donors to the campaign of 100 million meals, in support of the ongoing process of giving to the UAE, and we take this opportunity to thank His Highness Sheikh Mohammed bin Rashid Al Maktoum, for giving us this opportunity to participate in this campaign in the blessed month of Ramadan, so what? “We would have been able to reach the groups that support the campaign only through this blessed initiative, under the umbrella of Mohammed bin Rashid Al Maktoum Global Initiatives.”

He added that this approach to support and support the needy is nothing but a continuation of the path of giving, generosity, generosity and generosity that has been rooted in the UAE leadership, government and people, without distinction between race, color or religion, and therefore we thank the leadership that spares no effort in the happiness of the people of a country. The Emirates, residents of its good land, its guests and visitors.

Al-Hilali’s contribution to the Ramadan Charity Campaign, the largest of its kind, which allows the philanthropists of individuals and institutions in the UAE and abroad to reach their cash donations to new geographical and humanitarian horizons, at a time when the campaign succeeded during the first week of its launch in providing the equivalent of 78 million meals, and achieving 78 million % Of its goals to provide 100 million meals to target groups in lower-income communities in 30 Arab, African and Asian countries, through institutional and individual contributions and donations from various sectors.

– The approach to support and support the needy is a continuation of the path of generosity and generosity inherent in the Emirates.