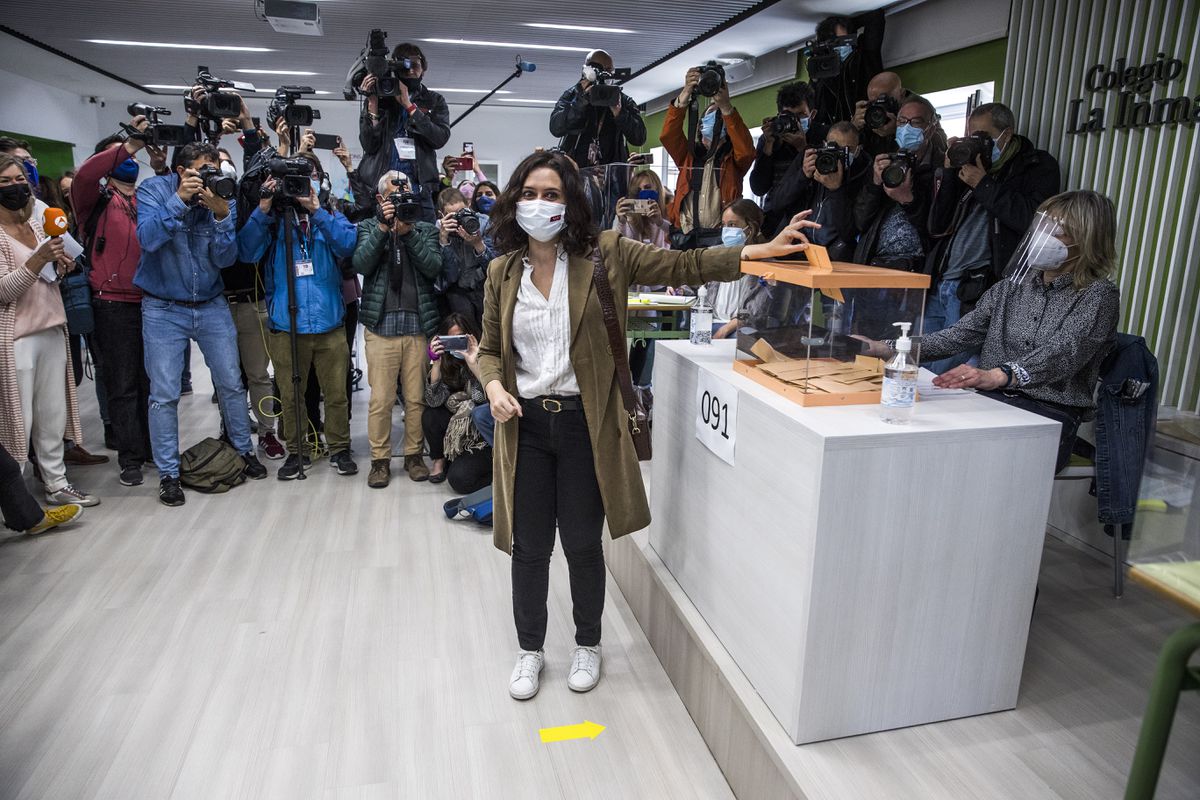 With between 62 and 65 deputies, Isabel Díaz Ayuso, candidate to revalidate the position of the PP, would have won the elections to the presidency of the Community of Madrid, and would govern with the support of Vox (between 12 and 14 seats), according to the estimate of vote of the poll carried out by GAD3 for Telemadrid and TVE. With an absolute majority of 69 deputies, the right-wing bloc would achieve between 74 and 79 representatives, compared to 56-63 from the left bloc (25-28 from PSOE, 21-24 from Más Madrid and 10-11 from Podemos).

This result would allow the PP to retain power in a region in which it has been ruling uninterruptedly for more than a quarter of a century, and would reward the risky decision to advance the elections, since the conservative candidate would have doubled her result from two years ago ( 30 representatives in 2019). If the prediction is confirmed, Ayuso would govern until 2023, when there must be elections again in Madrid.

Participation in the Madrid elections soars above 69%

Editorial | The pending challenges of Madrid

The great loser of the elections would be Ciudadanos, who would be left out of the Assembly, having failed to achieve the 5% of votes that mark the minimum to enter the Chamber. Edmundo Bal’s party would thus go from having 26 deputies to none, a hecatomb that would mean jumping from being in the regional government to disappearing from Madrid politics in just 54 days. The result of the formation of Inés Arrimadas would deepen a negative trend that began with the bump in the general elections of 2019 and continued in the Catalan elections in February.

On the left, the PSOE would get 25-28 deputies; More Madrid, 21-24, and 10-11 of Podemos. This result would underline the end of Ángel Gabilondo’s trip in regional politics, since his third candidacy for the presidency would have registered worse results than the previous two, and would leave him far from the data of his 2019 triumph (37 deputies and 27, 3% of the votes; PP, Cs and Vox allied themselves so that he did not govern).

For Más Madrid, the night of 4-M would be the confirmation that there is a space for a left-wing party with regionalist and environmentalist overtones in the Community, since Mónica García, the campaign’s revelation candidate, has improved the result obtained by Íñigo Errejón in 2019, despite being unknown to the general public.

Finally, Pablo Iglesias would have achieved his minimum objective, that Podemos obtain representation (10-11 deputies), but he would not have achieved the maximum: articulate a left-wing offer capable of ousting Díaz Ayuso from power. At the head of the minority force in the House, and condemned to play a minor role in Parliament, his political future would be surrounded by questions.

The Madrid Assembly will be constituted on June 8, and a maximum of 15 days later a name must be proposed to occupy the regional presidency. If the candidate did not obtain the confidence of the Chamber, the a two month countdown after which it would be mandatory to call new elections if no one achieves a majority. The same would happen if no one took the step of appearing for the vote: a plenary session would be convened without an applicant to start that countdown, pressuring the parties to negotiate. According to the result predicted by the Telemadrid poll, none of this would be necessary: ​​Díaz Ayuso (PP) would govern with the support of Rocío Monasterio (Vox).

Agriculture Spring sowing has already started in many areas

Amazon Prime Video, premieres in May: movies and series that arrive online