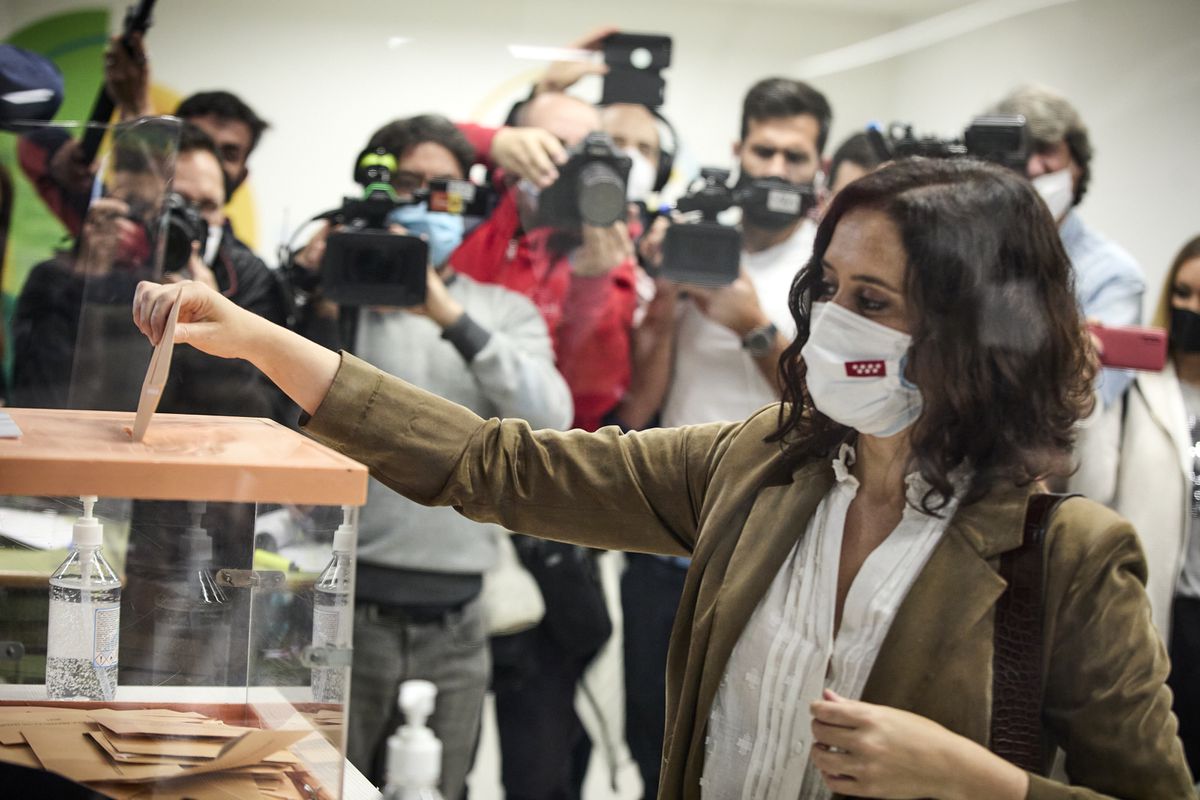 Isabel Díaz Ayuso, an absolute stranger without a great journey just two years ago, is consolidated as a true political phenomenon. The Madrid president and PP candidate is the great winner of the elections in Madrid, where she has swept to the point of achieving more seats than the three left parties combined, which will allow her to govern comfortably and without needing Vox for each law . The bloc on the right is clearly reinforced and takes 78 seats (65 from the PP and 13 from Vox) compared to 58 from the left (24 from the PSOE, 24 from Más Madrid and 10 from Podemos). Just two years ago, the difference between the two was four seats. Now it goes to 20. Madrid thus clearly turns even more to the right but due to the spectacular increase in the PP, because Vox is left with a result very similar to that of two years ago.

A historic turnout, 11 points higher than that of 2019, has not only not raised the left, but has sunk it much more, especially due to the collapse of the PSOE, which has just won the elections in Catalonia but has hit a hit in Madrid with a fall of more than 10 points that lead him to have the worst result in his history, and to tie in seats with a formation with hardly any means such as Más Madrid, which at the last moment of the count achieved by the minimum a historical sorpasso for only 500 votes.

Díaz Ayuso has not managed to reach an absolute majority – he remains with four seats – but it would be enough for him to abstain from Vox to be invested. Now it remains to be known whether or not this group will want to enter the Madrid Executive, but the results remove that possibility.

The left fails in its attempt to find a turnaround with the mobilization of the southern vote. The key to this fiasco is the puncture of the PSOE, which is left in less than two years a good part of its support despite having the same candidate that in 2019 widely won the elections in Madrid, Ángel Gabilondo, although he could not govern because the bloc the right wing had more seats than the left wing.

Serious wear of the PSOE

The result implies a serious erosion of the government party that contrasts with the recent success in Catalonia. More Madrid rises, but less than expected (two points), although that is worth it to catch up with the PSOE, while Podemos, with its leader at the fore, rises just under two points. Between the two they do not compensate by far the fall of the PSOE, so the right-wing bloc advances in Madrid despite the collapse of Ciudadanos, which, as expected, remains far from 5% -3.51% – and loses its 26 parliamentarians, who go entirely to the PP. Ayuso, who widely doubles its seats, has also managed to snatch deputies from the PSOE, something totally unforeseen.

The great question that remains now is what consequences this spectacular result of the PP in Madrid will have for national politics. Pablo Casado, the leader of the popular, was the first to speak on the famous Genoa balcony, a headquarters that is now looking for a new occupant, to clearly mark the image that the right wing is beginning its recovery in Madrid. “Today Madrid has made a motion of censure to sanchismo,” said Casado.

The PSOE has shown much greater wear than expected in a key community, but the Socialists insist on encapsulating this failure as if Madrid were a political island. From the PSOE they insist that “Madrid votes differently than the rest of Spain” and they remember the terrible results of the PP in Catalonia or in the Basque Country. “This is a very important community, but it does not represent the whole of Spain, as we have just seen in the result of the PP in Catalonia,” said José Luis Ábalos, secretary of organization of the PSOE, with a face that reflected the devastating result. “We have two years ahead of us to build the progressive alternative that Madrid needs. We put ourselves to them ”, said Ábalos making it clear that Gabilondo is already past for the PSOE.

The truth is that this abrupt movement of the political board began with a decision by the PSOE and Ciudadanos, who made a failed motion of censure in Murcia that with a kind of very rapid butterfly effect has ended with a landslide victory in Madrid that clearly reinforces the PP, that completely absorbs Ciudadanos, and injects morality into conservative voters, who will now believe that it is possible to return to La Moncloa. “By uniting all the center-right, Sánchez can be beaten. There is a party. There is a future ”, exclaimed Casado. “Freedom has triumphed again,” Ayuso concluded between shouts of “freedom, freedom.”

Madrid will thus become the ram of the PP in a resounding way. The capital community has been the epicenter of the PP opposition when it is not in La Moncloa since the time of Esperanza Aguirre, who competed with Mariano Rajoy and was constantly ugly that he was not hard enough with José Luis Rodríguez Zapatero.

Now we must also see what internal consequences this victory has for the PP. Aguirre, with significant support in some conservative media such as Ayuso, was Rajoy’s great nightmare, to the point that the then opposition leader moved quickly after his second electoral defeat in 2008 and sought the support of two key regions, the Valencian Community, controlled by Francisco Camps, and Andalusia, then in the hands of Javier Arenas, to block a possible movement by Aguirre to dispute the leadership of the party. Rajoy achieved so many territorial support pushed by that pact with Arenas y Camps and so many guarantees that Aguirre finally gave up and did not fight him in a congress that, not by chance, was held in Valencia and not in Madrid, the territory that was always hostile to Rajoy.

It was in those days when the leader of the PP, launched against Aguirre, pronounced a phrase that years later some veteran leaders have recalled before the division of the right: “If someone wants to go to the liberal or conservative party, let him go.” he said in a direct blow to the then president of Madrid, who always boasted of being a liberal. Rajoy boasted then that he was appearing at that congress because his colleagues asked for it, and not “any newspaper or any radio.”

Ayuso has all the power

Things have changed a lot in the current PP, but the pattern is repeated in some way. Ayuso devastates and has all the power in Madrid, the richest community and the one that accumulates the most political and media weight, being the political and financial capital and the headquarters of the main media in the country. Meanwhile, Pablo Casado suffers in the opposition, without clear options to return to government, with a very reduced weight in Congress, despite the fact that with the repetition of the elections in 2019 he went from 66 to 89 seats, and with deep questioning internal similar to that suffered by Rajoy in 2008. Casado has lost twice, but in the same year, and everything indicates that he has sufficient internal strength to reach the next elections, where he will have his litmus test.

The big difference about Rajoy is that Casado put Díaz Ayuso in that candidacy, she owes him his position, while Aguirre came from the time of José María Aznar and was never considered a debtor of Rajoy, rather a political rival. In the PP, many fear that Ayuso and his right hand, Miguel Ángel Rodríguez, emboldened by this victory, will break ties with Casado and will even think of replacing him at some point if his leadership does not catch on. That is, Ayuso will become a new Aguirre for all intents and purposes. But both in Casado and Ayuso’s environment they insist that whoever says that does not know the true political and personal relationship between them, and above all they insist that Ayuso has only achieved political support for two years and now he has to prepare. in a kind of permanent campaign – which is what has dominated his mandate – to think about consolidating this power in the 2023 elections and not losing it to the left and also closing the way to Vox.

Ayuso is a very particular political phenomenon, because she was chosen by Casado above all because she was a close friend of his and a person whom he considered faithful and proof of everything. When he chose her, Casado suffered a moment of great internal weakness and used his power to place faithful people in strategic places. The one in Madrid was fundamental. However, Ayuso quickly began to fly alone, and much more since Rodríguez became her chief of staff. Now a great litmus test will come to see how that balance of internal power between Ayuso and Casado is made. If the leader of the PP allows the Madrid president to take control of the party in Madrid, something that Rajoy allowed Aguirre although he later regretted, this will indicate that he has chosen to give free rein to Ayusismo and she will clearly mark her mark in the dynamics of the PP. If, on the contrary, he decides to make a kind of counterpower and fight so that the PP of Madrid is in the hands of someone like Ana Camins, it will mean that Casado wants to try to control Ayuso and not fall into the mistakes of Rajoy with Aguirre.

That will be the internal battle of the PP. But in the long-distance photograph, the one that sees the balances of national politics, the blow that the PP has just given is very strong and the PSOE shows a brutal wear and tear that will make La Moncloa and the headquarters of the Socialists reflect on Ferraz street, on the reasons for this coup. The stability of the Government for the coming months also depends on that analysis and the ability to turn it around, in which it is not ruled out that the PP take advantage of this moment of weakness of the Socialists to advance the elections in Andalusia, where it could also be clearly reinforced in front of a left that lives a moment of weakness with internal wars both in the PSOE and in United We Can.

The Rambla de Cartagena Plan will have its first 40,000 meters of gardens in summer