Axel Kicillof explained the image of ‘unity’ of the leadership of the Frente de Todos: ‘Militancy needed it’ 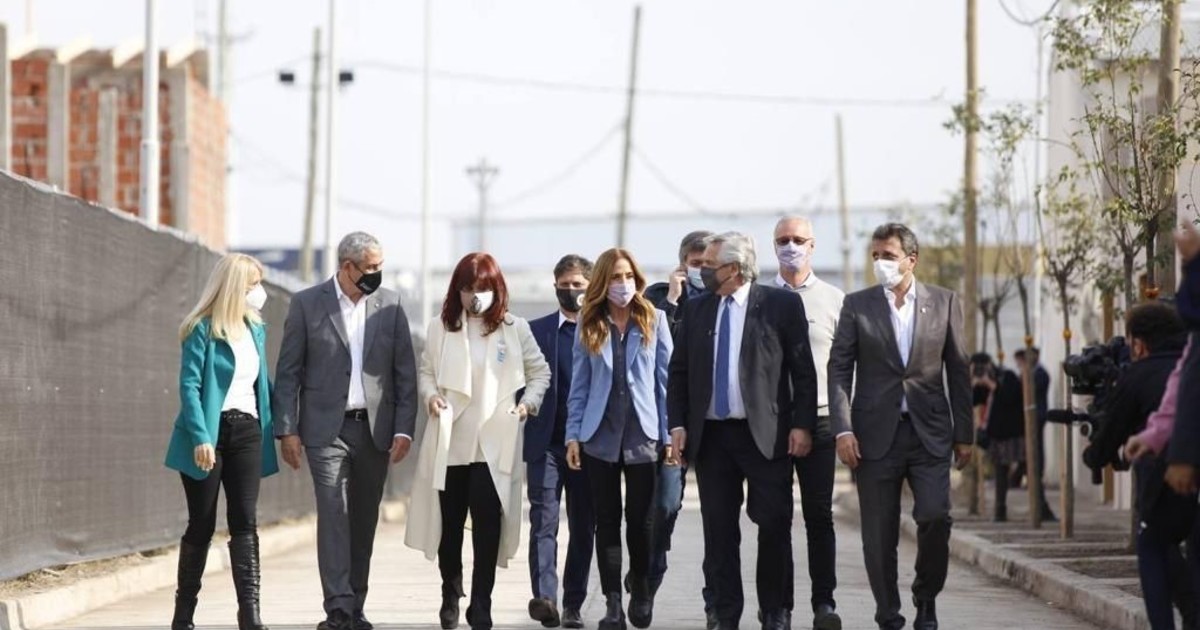 Axel Kicillof spoke of the image of “unity” in the plenary session at the Estadio Único de La Plata to delineate the axes of the electoral campaign of the Frente de Todos, which confronted the leadership of the ruling party with officials, mayors, leaders and militants, and said it was “a purely political act“.

“In plenary we were able to speak to him to the militancy that needed it, to our candidates who attended. More than 500 candidates in the province of Buenos Aires, cutting the list, it is a very large province where we have elections in the 135 districts, “declared the Buenos Aires governor on the official channel C5N .

Kicillof said: “You really wanted to hear the word, openings could not be heldSo it was a purely political act where I think each speech showed what is at stake now. “

For Kicillof, 2021 was “a very difficult year“As we never had to go through vaccination, pandemic, reactivation and at the same time a very important election,” he listed.

According to his political perspective, what is at stake is “discussing again two models of the country.” “It has to do with certain laws that were proposed by deputies Máximo Kirchner and Sergio Massa, it has to do with something central in the Province, we we don’t have a majority today in the Senate and every time we try to bring a bill to the Legislature They politicized her, they tried to bastardize her“, Shooting.

“I also have to say that some laws we got approval but it was very difficult,” he later clarified.

He also recalled the act on Maciel Island – where the first symbolic photo of the entire dome and the main candidates together was given – and said that they were there “reactivating stopped works for macrismo. “” We had done it before in La Matanza, where a university center that also had to wait four years to open it, “he urged.

And, as it is already a fixed every time someone speaks of the ruling party, he hit Mauricio Macri for his previous management.

I am convinced that politics is built collectively. Today I am the president, but I am also one more cog in a project willing to lead society towards a better destiny.

The pandemic was a major obstacle, but it did not stop us from making progress towards it. pic.twitter.com/uhIMKS9vEO

“There were things they needed that Macri left of the government to be able to activate them like schools, hospitals, gardens, houses. In this we are in the middle of the pandemic, to reactivate, “he shot.

Almost as the axis of his campaign speech, Kicillof attacked “Both the macrismo and the Buenos Aires media” which he called “macristas” and accused: “They worked to tell society that everything was fine”

And rescued that the pandemic passed “without regretting the lack of a bed or respirator” neither “without having to reach such an extreme situation for a doctor to tell who he was putting the device on and who he wasn’t, whose life it saved. “

In that sense, he said that the opposition tries to “sow discouragement”. “It is not only attacking a party or the government, but also the self-esteem of an entire people that struggled so hard to get out of the pandemic,” he concluded, while pointing to the opposition.

The Unique Stadium of La Plata found this Wednesday – for the second consecutive day. President Alberto Fernández, Vice President Cristina Kirchner at the same ceremony, with the leadership of the political party they founded.

The government unit photo after the Olivos scandal showed them in a plenary session at the renowned Diego Maradona stadium to outline the axes of the Frente de Todos electoral campaign.

In her speech before officials, mayors, leaders and militants, Cristina then defended the management and warned: “Our economy urgently needs consumption to grow and this requires not one period but many periods of government.”

The vice president spoke after Máximo Kirchner, Sergio Massa and Kicillof. The president of the Chamber of Deputies directly confronted the Macri government: “They left us a bolt of 53 billion dollars, “he said in reference to the debt with the Fund.

Kicillof had said on that occasion: “We are very close to an election, a key moment and I already believe that we have all realized that the strategy of our opposition, of macrismo, is for the pandemic to work. like some kind of pill, from pill of amnesia “.

LeBron James arrives at Fortnite: this is how the LA Lakers forward appears in the battle-royale