Austral name new SUV Renault, preview, how it will be 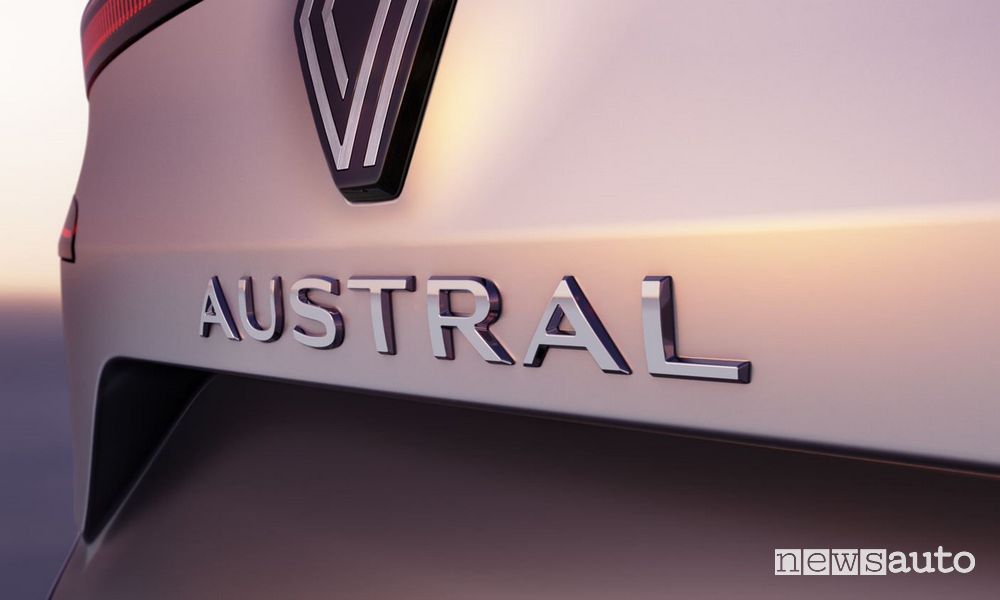 Austral is the name of the new Renault SUV, which arrives in 2022 and replaces the range of the French brand Kadjar. The announcement was made by surprise, along with the first image of the new one C-segment SUV.

New SUV Renault Austral, how it will be

The new Renault Austral is characterized by a total length of 4.51 m and inside it has ample space for 5 passengers.

From an aesthetic point of view, the designers have designed a Captivating SUV, in terms of proportions, ratio, overhang and wheel size, placing the emphasis on the shoulders and giving it a muscular look. The new Renault design language also debuts with Austral.

Analyzing the first photos, one of the most important stylistic elements is a marked and structuring crease on the lower part of the sides of the bodywork. Tilted forward, it confers dynamicity to the vehicle profile.

This stylistic feature differs from the classic succession of lines parallel to the road. Austral is also a highly technological car and you can tell by the front and rear lights

Behind, in fact, we find two imposing ones C-Shape headlights, which rejoin the logo creating a spectacular effect. The same applies to the front of the vehicle, where the headlights and grille do not go unnoticed. Inaugurated on Renault Mégane E-TECH Electric, technology micro-optics consists of a plexiglass plate on which motifs and lines are engraved, on the surface or in depth. When hit by the LEDs, all of them the engraved areas light up creating a precise, lively and easily identifiable visual effect.

The engine range of the new Renault Austral provides only electrified petrol engines, most of which is unpublished: an engine New generation E-TECH Hybrid, one 1.3 TCe mild-hybrid 12V and the unprecedented engine 1.2 TCe mild-hybrid 48V, for the first time in the Renault range.

This range of engines promises to be super efficient, with emissions starting at 105 g CO2 / km (for the E-TECH engine in WLTP cycle, in the process of homologation) and a maximum power up to 200 hp.

Renault Austral, why is it called that?

Renault has chosen the name Austral for its new SUV, which has been part of Renault’s naming base since 2005. Derived from Latin Australis, spontaneously evokes the colors and warmth of the South, the tranquility of nature and large spaces.

Austral in the Renault strategy indicates size international of the new model, which will be marketed throughout Europe and beyond.

Renault wants to give in the choice of the names of its cars sense and emotion to the model. In this case, thanks to double A and to the association of central consonants with “STR”, this is an “easy to pronounce” and “balanced” name, which according to Renault refers to the strength of the SUV e to the idea of ​​control.

When does the new Renault SUV come out, heir Kadjar?

The new Renault Austral SUV comes out in spring 2022 and in the French range it is the heir of the Kadjar.

👉 All the news from the Renault brand

Albon and the flop in Red Bull: “I lacked experience” | FormulaPassion.it

Alexander Albon this year he returned to play a 'starting' role in F1, accepting the difficult challenge of replacing George...

Formula 1 has recently entered a new technical era with the 2022 regulations, but as often happens, humans tend to...

The Australian tour of Maserati: the goal is to make the people of the oceanic country aware of all the...

E-Prix Seoul-1: Rowland redeems himself with pole and podium | FormulaPassion.it

Among the most surprising aspects of the first Seoul E-Prixstaged on Saturday as the first of the two South Korean...

Verstappen aims for 13: Schumacher and Vettel’s record in the sights | FormulaPassion.it

Max Verstappen went on vacation this year with a reassuring advantage in the world championship standings. In fact, the reigning...

The time for restyling is approaching BMW X5 M. The high-performance version of the German SUV has undergone new tests...