Attack against Iván Duque in Colombia: investigating whether the attackers used a rifle of the Venezuelan Armed Forces 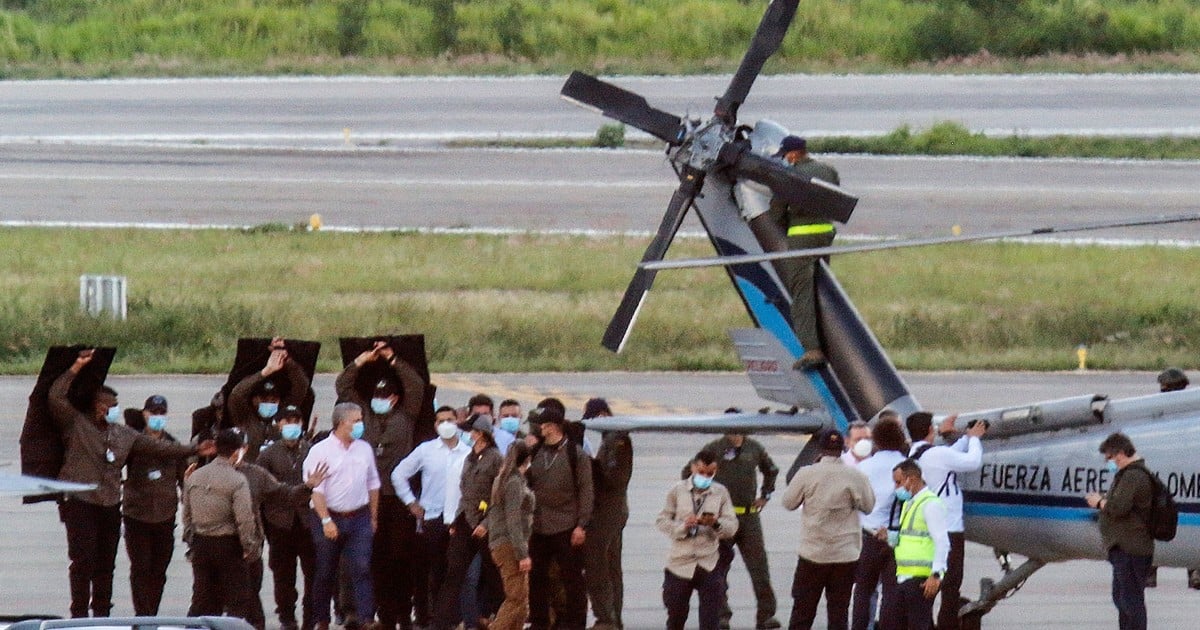 Colombian authorities continued this Saturday the intense search for the perpetrators of the attack on the helicopter in which President Iván Duque and two of his ministers were traveling, who were unharmed. And they begin to emerge doubts about security flaws of the agent and if they were used weapons linked to the Armed Forces of Venezuela.

The police carried out in the early morning various records to homes In the neighborhood from where the helicopter was allegedly shot, a Sikorsky UH-60 Black Hawk of the Colombian Air Force (FAC), which managed to land at the Camilo Daza international airport, in Cúcuta, capital of Norte de Santander and border with Venezuela.

Duque and his Ministers of the Interior, Daniel Palacios, and of Defense, Diego Molano, as well as the Governor of Norte de Santander, Silvano Serrano, and the Mayor of Cúcuta, Jairo Yáñez, who had accompanied him on a visit to the town of Sardinata , in the Catatumbo area, emerged unscathed from the attack, despite the fact that six shots hit the aircraft.

Images released by the Colombian government show the bullet holes in the helicopter in which President Iván Duque was traveling. Photo: AFP

The director of the National Police, General Jorge Luis Vargas, said that in the La Conquista neighborhood, which is 1.2 kilometers from the airport, Two rifles were found that are suspected of having been used in the attack.

“They are an AK-47 with a registration number that is already being searched by experts from the National Police and the Prosecutor’s Office, and a 7-62 caliber FAL rifle with marks of the Venezuelan Armed Forces“he declared.

For the moment, the Colombian government has not given more details on who may be behind it, although it has offered a reward of up to 3,000 million pesos (almost 800,000 dollars) for anyone who provides “information that allows finding those responsible for this terrorist attack.”

However, there are doubts about national security failures and intelligence cracks, which allowed an attack to be perpetrated against the head of state himself.

“Putting the President of the Republic to land in a place where the guarantees are not indicated is an act of irresponsibility on the part of the State forces,” security analyst Jairo Libreros, a professor at the EFE, explained to the EFE news agency. University extership of Colombia.

The attack was carried out just ten days after a car bomb exploded at the headquarters of the Army’s 30th Brigade in Cúcuta, where there were US military personnel, and 36 people were injured.

In that sense, Senator Rodrigo Lara, from the Radical Change party, asked Congress to review these incidents in a private session because he considers that “what is happening with the country’s security is absolutely implausible,” and believes that there is a weakness in the capacity for foresight and strategic counterintelligence.

“The Military Forces have lost administrative capacities for security management, both in terms of national defense and in terms of security guarantees for the public figures they are in charge of,” Libreros added.

For his part, from the Army, the Air Operations Commander, Major General Fernando Losada, assured that “the public force will continue to work tirelessly to carry out operations against these dark and violent forces that want to bring evil to our country.”

The president of Colombia, Iván Duque, with his Minister of the Interior, Daniel Palacios (left) and the Minister of Defense, Diego Molano, in Cúcuta, Colombia, this Friday. Photo: AP

The Catatumbo region, which covers 10,089 square kilometers, mostly jungle, forms the border with Venezuela and is made up of eleven municipalities where The guerrillas of the National Liberation Army operate (ELN), FARC dissidents, a stronghold of the Popular Liberation Army (EPL) and gangs of paramilitaries and drug traffickers.

The situation worsened after the FARC left, with the signing of the 2016 peace agreement, as Paola Perdomo, a researcher from the Fundación Pares, recalls, but “what has happened between last year and this has been a very accelerated transformation of how these groups are configured in the territory “.

The ELN managed to withdraw the criminal gang from Los Rastrojos, which controlled the urban area of ​​Cúcuta, to Venezuela and now there is “a metropolitan area where the predominance of one actor is a little more diffuse, (where) the ELN has now positioned itself, and from then on, events have occurred that did not occur in Cúcuta before, “reflects Perdomo.

However, last week the guerrillas dissociated themselves, through a brief statement, from the attack on the brigade and, after announcing this week a change in the leadership with the replacement for health reasons of its number one, Nicolás Rodríguez Bautista, alias “Gabino”, by Eliécer Chamorro, alias “Antonio García”, has not yet commented on the facts of this friday.

“The ELN does have the capacity to plant a bomb in the Cúcuta military brigade, as it did in the General Santander Cadet School (Bogotá) in January 2019. But that it has managed to infiltrate in such a deep way the scheme and the Mobility agenda of the President of the Republic to have the helicopter flight plan, I don’t think they still have that capacity, “said Libreros.

The government, which did point to the ELN as the author of the attack against the military brigade, according to the “suspicions” of the Defense Minister, has not yet given any name, not even indirectly, about this episode.