Athletics Finnish athletes are making wild results – what is the level enough for next year’s European Championships in the end? 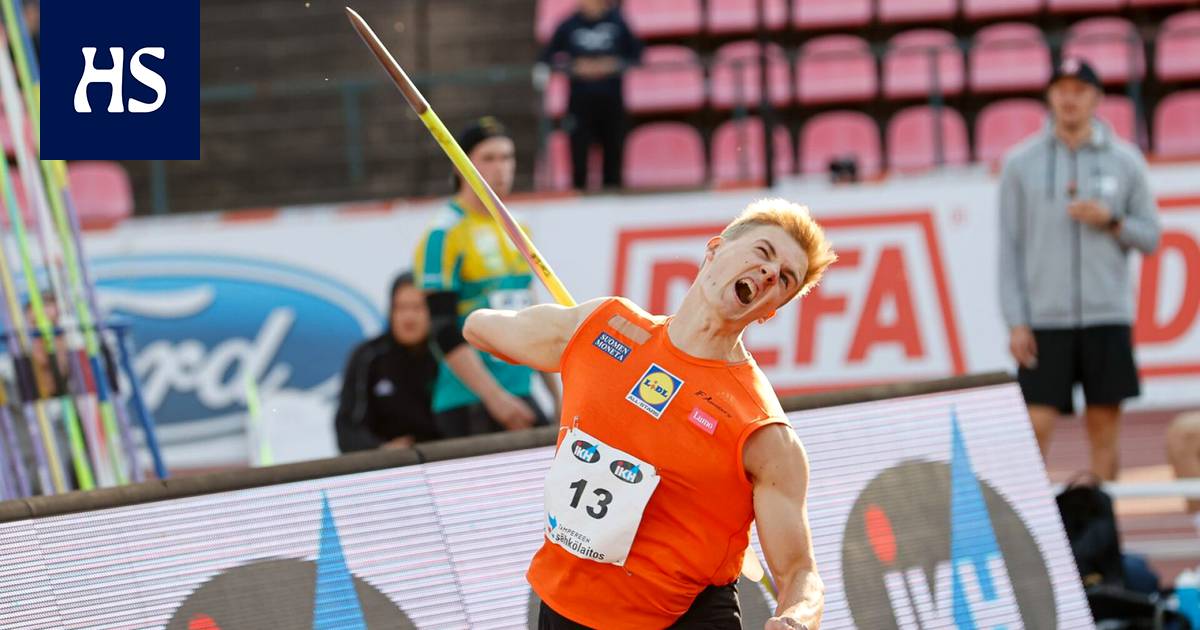 The Kaleva Games saw the farewells of two experienced athletes and the emergence of young talent.

In total, the duo took with them 25 valuable race experiences. Kinnunen walked 15 times in the championships, and Ruuskanen threw in dozens of adult championships.

Farewell marks the beginning of a new one. The next generation of athletics is growing in Finland, with its first big show in a year’s time at the European Championships in Munich.

Before that, we compete at the World Cup level in Eugene, USA, but in principle, the goal and level of many new generations of athletes is in the European Championships.

Finland has long been concerned about the continuity of javelin throwing, when Antti Ruuskanen and the medal group Tero Pitkämäki stopped. Surprisingly, this summer Finland has become the European champion and world champion in youth.

Topias Laine won the European Under-23 Championship in Tallinn and Janne Läspä under 20s World Championships in Nairobi.

Läspä will hardly have time to develop so suddenly that he would compete in the European Championships next year, Laine has instead thrown 80-meter arches. The Helsinki resident is as small as a spear thrower (178 cents) but already has the top speed in the world.

Read more: Topias Laine is a rarity in Helsinki and one of the fastest in the world: “Family dominance must be taken this summer”

Ruuskanen, who officially ended his racing career on Saturday, dared to retire, when a continuation of the spear tradition has been found.

European Championships performance limits have been intentionally set high. The earnings period began on July 27, 2021 and ends on July 26, 2022.

There are seven completely confident European Championship athletes – that is, those who have broken the race limit so far – Sara Kuivisto (800 and 1,500 meters), Topi Raitanen (Obstacles of 3 000 meters), Wilma Murto (pole), Viivi Lehikoinen (400 meter fences), Elmo Lakka (110 meter fences) as well as a spearman Lassi Etelätalo and Oliver Helander.

Kristian Pulli has jumped to a length of 796 cents. The result is enough for the 22nd place in the current rankings, when 26 jumpers will advance to the European Championships in Munich.

The actual race limit is 810, which hardly causes Pull problems when he is in his best race mood.

The situation for female triple jumpers is interesting. Kristiina Mäkelä jumped 14 meters and 21 cents at the Tokyo Olympics, Senni Salminen 14 meters 20 cents. The EM limit is 14.45.

Salminen’s SE is 14.63, which he has jumped before the time limit for making EM limits began on 19 June.

26 jumpers will be taken to the European Championship jump. There are not so many female trio jumpers in Europe jumping over 14.45. This also allows you to get involved with a weaker result.

The men’s 800 meters is such a competitive journey in Europe that at the moment, Slope would not make it to the European Championships even through the rankings. So you still have to tighten up the pace of Saarijärvi a bit.

Whimsical females Silja Kosonen and Krista Tervo threw the World Cup limit (72.50) already at the turn of June-July but have not violated the European Union limit within the permitted time.

The same goes for the javelin thrower Toni Kuusela, with a score of 85.03, exceeds the World Cup limit by three cents. The European Championship limit is 84 meters, but Kuusela has not reached it.

Correspondingly, Etelätalo threw 84.50 at the Tokyo Olympics, which is enough for the European Championships but not for the World Championships. Helander will have an entry ticket with the result of the Kaleva Games 86.13 to both value competitions next year.

On Sunday, Wilma Murto also exceeded the World Championships in pole vaulting with a Finnish record of 472 cents.

“I haven’t sweated because of the World Cup limit because my ranking is enough anyway,” Murto said.

Read more: Wilma Murto bent the Finnish record and dropped a big ballast from his shoulders: “This is starting to touch the perfect season”

Sevens Maria Huntigton and the youth world champion Saga Vanninen have scored points above the European Championship threshold (6,318 and 6,271) this season, but at the “wrong time” in late May and June.

Recovering from foot surgery Annimari Korte On June 8, Paavo Nurmi ran for 12.91 seconds at the top of the season – so far too early for next year’s value selections.

In the quick fences the European Championship limit is 12.93 and in the World Championships the really tight 12.84. The card’s Finnish record is 12.72. Finnish champion Reetta Hurske and recover from injuries Nooralotta Neziri and Lotta Harala also compete for seats.

The promise of a runner Eemil Helander will possibly pair up with Raitanen in hurdles, at least in the European Championships.

Won the high jump in the Kaleva Games Ella Junnila deliberately raised the bar to a height of 195 cents after the championship had already been decided. 195 cents is the EM limit, the World Cup limit is one cent higher (196).

In men’s pole vault Mikko Paavola has improved its record for the year by 25 cents and is now 571 cents. It only exhausts four cents from a secure European Championship venue. Exceeding 580 cents is required for the World Championships.

“The EM limits are really tough. Based on the results, it is really difficult to say how big the Finnish competition team will be, ”SUL’s top sports coaching manager Tuomo Salonen says.

Munich was chosen as the host of the competition as next year marks the 50th anniversary of the Summer Olympics in the city.

European Championships Berlin was a big disappointment for Finland: in three points the team’s success rate was 6.97.

We had to go back 52 years in time to find an equally poor result in the history of Finnish athletics. The last time Finland was left without a medal was in 1966 in Budapest.

The poorly run competitions led to changes in coaching leadership in the fall of 2018, when the coaching director Jorma Kemppainen was allowed to give way.

“I have to evaluate my position as a team skipper,” Kemppainen told HS at the time.

The top management of the Finnish Sports Confederation also changed later, from the former decathlete Sami Itanista became president of the union in November 2018.

Itani has announced that she will be available for the next season but at the same time hopes for a critical discussion on the species.

Coaching manager Salonen, on the other hand, is an experienced national team knight in middle distance running, so the former top athletes have taken over in SUL.

This has been reflected in a positive way in the spirit of the Finnish athletics team. For example, Sara Kuivisto said at the Olympics that an athlete is now good at sports when things are taken care of.

On Sunday the ending Kaleva Games brought out a whole host of new names and promises for the future. Men’s Long Jump Winner Kasperi Vehmaa is only 16 years old.

He improved the record at Ratina Stadium by 15 cents with a winning streak of 749 cents. The last time the Finnish long jump championship was won was a little worse in 1996.

It by no means diminishes the value of Vehmaa’s victory, but shows the wave motion of the sport when Pulli was not involved.

One The 400 meters of women became the surprise sport of the Kaleva Games and perhaps at the same time a new trend sport, with which six top women improved their record.

Also for next summer’s European Championships, it would be worthwhile to invest in SUL in the message group, so that the Finnish women’s long-distance team can be seen in the value competitions and even in the finals for a long time.

“I don’t know about the finals, but the team at least,” Lehikoinen said.

The last time the women ran a long message was at the European Championships in 1990 in Split, where Finland was eighth in the final.

Read more: Towards the light

Read more: A new star in Finnish athletics was lit at the World Championships in Nairobi: “There is still room for tightening,” says coach Heidi Salminen

Read more: This is where the top runner of the future grows