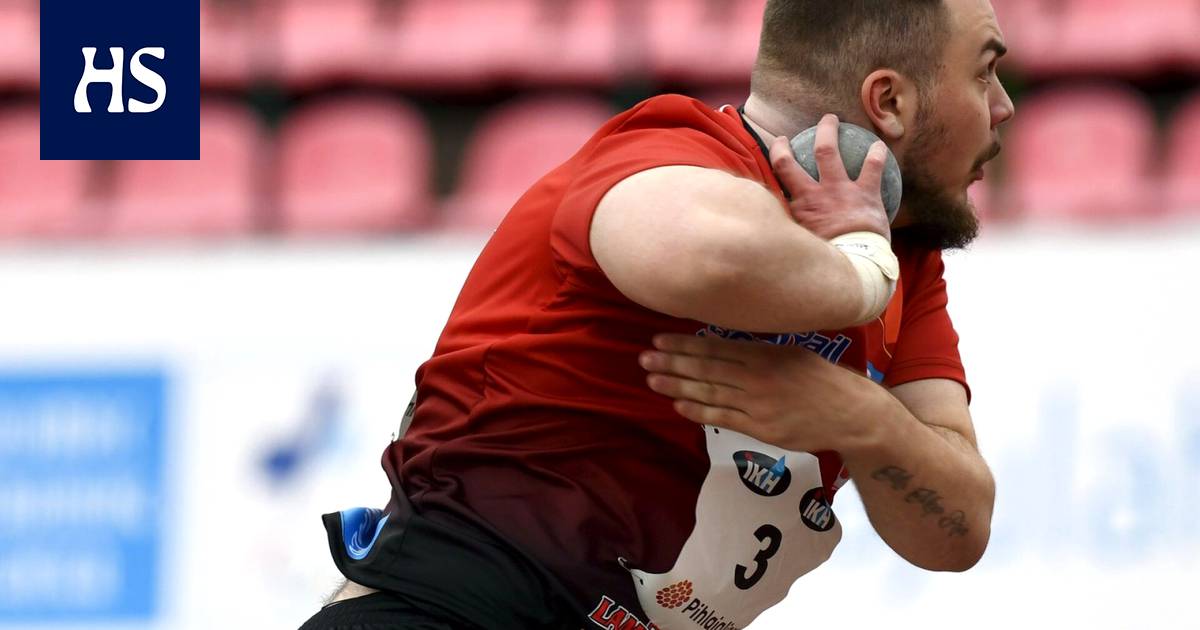 Baas ran for the 400-meter semi-finals, and Leveelahti advanced to the puck final.

Finland Arttu Korkeasalo pushed the result in the men’s ball qualifier to 18.89 and advanced to the final of the evening in the European Athletics Under-23 Championships in Tallinn. The result is a record for Korkeasalo’s outdoor tracks and the top domestic result in the summer.

Korkeasalo’s best result came in the second round. The third also brought the result 18.31.

“That second push was as it should be. I then wondered if I would push the third when the final place looked certain. I decided to push, and it was such a basic push, ”Korkeasalo, the sixth best in the qualifiers, told the Sports Association in a press release.

“The market is pretty slow. Usually in these races it is pretty fast. Let’s see if the rain wets it into the final of the evening. There I want to push it 19 meters, ”Korkeasalo, who measured a result of 18.93 in the hall in February, said.

Qualifying a total of three men exceeded 19 meters. The most important was Belarus Dzmitri Karpuk, which pushed 19.28.

Finland Eero Ahola reached his best result of 17.96 and was 15 centimeters behind the final spot.

“If you compare your own result only with the results of the early season, you could be satisfied. But then not if you compare it to what happened on the practice field and in the last exercises. Based on them, we should have gone to the finals, ”Ahola said.

Women In the first round of the 400-meter run in Finland Mette Baas rushed for a time of 53.46 and advanced straight to the 400-meter semi-finals. French winner Sokhna Lacoste clocked 53.26.

“The idea was to start strong enough not to come over right away when the toughest competitor was there. The run was pretty sticky, but luckily it was enough to continue, ”Baas, who ran on the fifth track, opened.

Women’s discus throw qualifier Helena Leveelahti snatched 53.23 and was ninth. The result was enough for the final.

“There was a bit of excitement at the beginning, but the second throw already made it easier. It was ok, as was the third, although I was expecting such a 55-meter throw. ”

Dutch Jorinde van Klinken was number one in the qualifiers on the 61.97-meter arc.

Tokyo selected for the Olympics Viivi Lehikoinen progressed effortlessly to the women’s 400m hurdles semi-finals. Lehikoinen won his own first round with a time of 57.45 and was the fifth fastest in the first round.

The Finnish runner did not have to squeeze too much in one, as he ran the French second Camille Seri was more than half a second away from Lehikoinen.

“It was talked to the coach that I would run seven fences as usual. But I have come to the rhythm of 16 steps all the way there, ”Lehikoinen said. “Here I got very scaly muscles.”

On his main trip, Lehikoinen is the second in statistics at the European Championships in June, with a record of 55.77. Only Slovakia is ahead of the Finn Emma Zapletalova, who ran the fastest time in the opening rounds at 56.84.

Lehikoinen will have a Finnish club in the European Championship semi-finals running on Friday, as he will Nea Mattila grabbed a straight continuation after being third in the batch with a time of 58.59.

“It was a good feeling now. But on Friday you have to take a curve better that will cross the fence well. Now I let them go bad, ”Mattila said.

Frida Hämäläinen was in his first round with a time of 60.54, which was not enough for the semi-finals.

Evening qualifiers in Finland Ella Nisula and Viola Westling made their records, but the duo narrowly missed out on the final places. Nisula set a new record of 13.10 in the women’s triple jump and was the first athlete to be eliminated from the final.

The Finn improved his record by six cents, but the final place would have required an additional five cents.

“Fortunately, I will be able to get to these races again in two years,” 19-year-old Nisula said.

Viola Westling, who is currently focusing on 800 meters, pushed the two-lap record to a record of 2.04.81 and was third in her batch. The result was 0.4 seconds away from the final place.

Ari Paunonen the trainee will run 400 meters and 1,500 meters in addition to his main distance at the European Championships.