At what point is the political crisis in Tunisia: Said fires 20 senior government officials 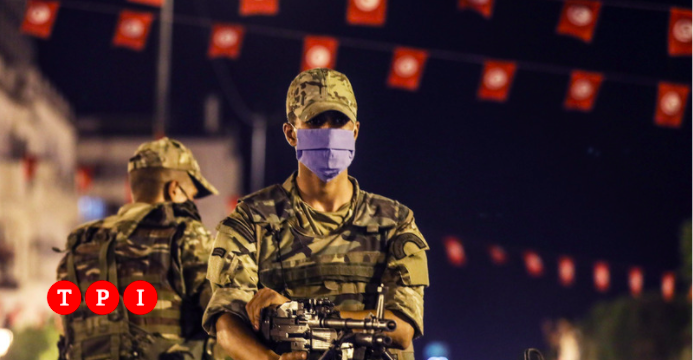 The Tunisian president Kais Saied goes ahead quickly and after removing the prime minister, freezing parliamentary work for 30 days and announcing that he will take up government posts himself, he also sacked about twenty senior government officials and the military attorney general by decree Taoufik Ayouni.

Among the excellent torpedoes are the general secretary of the government, Walid Dhahbi and the President of the General Committee of Martyrs and Wounded in Revolution and Terrorist Acts, Abderrazek Kilani. The political crisis unleashed by Saied on Sunday evening has its origins in an endemic political instability, in a heavy economic crisis and the consequent inability of the deposed government to manage the Coronavirus pandemic, which in Tunisia is one of the worst in Africa.

After the Arab Spring of 2011, Tunisia was the only country to have maintained a democratic form of government, but in the last 10 years, Tunisian democracy has proved very fragile and unstable. Today the country is facing an unprecedented crisis, with the unemployment rate at 18%. The ruling party Ennahda failed to cope with the economic situation aggravated by the arrival of Covid: to date, only 7% of the population is fully vaccinated, while over 90% of the beds in intensive care are occupied, according to data from the Ministry of Health.

The economic and health crisis

Frustrated by the economic malaise and mismanagement of the pandemic, thousands of protesters challenged the restrictions imposed on Sunday to avoid contagion and the scorching heat in the capital, Tunis, to demand the dissolution of parliament. The crowd, largely made up of young people, called for early elections and new economic reforms. The officers used tear gas to disperse some of the demonstrators, who had thrown objects at them, and made several arrests. President Saied then announced that he had ‘deposed’ the prime minister and suspended parliament due to concerns about the maintenance of public order. Although Saied has a path as a democratically elected politician – unlike other heads of state such as the Egyptian president Al Sisi – even outside Tunisia, more and more analysts and observers have begun to describe what is happening in the country as a coup.

The attack on the press

Two days ago, Monday 26 July, Tunisian law enforcement officers closed the local headquarters of the Arab TV based in Qatar, Al Jazeera. Journalists and employees were warned in good time to leave the sites, said the director of the Tunis office, Lotfi Hajji. Shortly before, Al Jazeera on its Facebook page, based on “well-informed Tunisian sources”, had written that the premier Hichem Mechichi he is not under arrest but at his home and that he intends to reunite the Council of Ministers anyway.

Today afternoon, Wednesday 28 July, we learn from the “Woman in journalism” network that the New York Times journalist Viviane Yee she was arrested by the police and various observers are worried about the pressure of attacks on the press.

The reactions of Saudi Arabia and Turkey

“We support everything that guarantees the security and stability of Tunisia and we are certain of Tunisia’s ability to overcome the current situation and guarantee a dignified life for its people”, meanwhile, a statement from the Saudi Foreign Ministry reads on the situation in Tunisia, relaunched by the local media.

“Saudi Arabia also invites the international community to stand by Tunisia in these circumstances to address its health and economic challenges”. While the Turkish Foreign Minister Mevlüt Cavusoglu he expressed expressed on the phone with his Tunisian counterpart Othman Jerandi “Turkey’s attachment to the country’s security and stability”, underlining Turkey’s “confidence in the ability of Tunisia and its people to overcome these delicate circumstances”.

The fear of the increase in landings in Italy

Meanwhile, political chaos in Tunisia unleashes more or less justified fears on the other side of the Mediterranean. These include the increase in landings in Lampedusa and other landing points in Southern Italy, where arrivals of migrants have multiplied in recent days, prompting local authorities to ask the government for new and timely agreements with the North African country. According to Tunisian press sources, thousands of citizens – up to 15,000 – are ready to leave the country and cross the Mediterranean to reach Italy.

Last May, the Tunisian migration issue was at the center of the Interior Minister’s second mission Lamorgese and of the EU representatives in Tunis, during which the first guidelines on repatriation, dismantling of smuggling networks were drawn up, in view of a major strategic partnership agreement between the European Union and Tunisia, which should intervene no earlier than end of the year.

Activists and jurists denounced the “lack of transparency” on the international and bilateral agreements concluded so far between Italy and Tunisia, both the most recent and those of the past, starting with the one signed on 6 August 1998 by the then Italian Foreign Minister, Lamberto Dini , and by the Tunisian ambassador in Rome.