At least 20 killed in clashes during protests in Myanmar 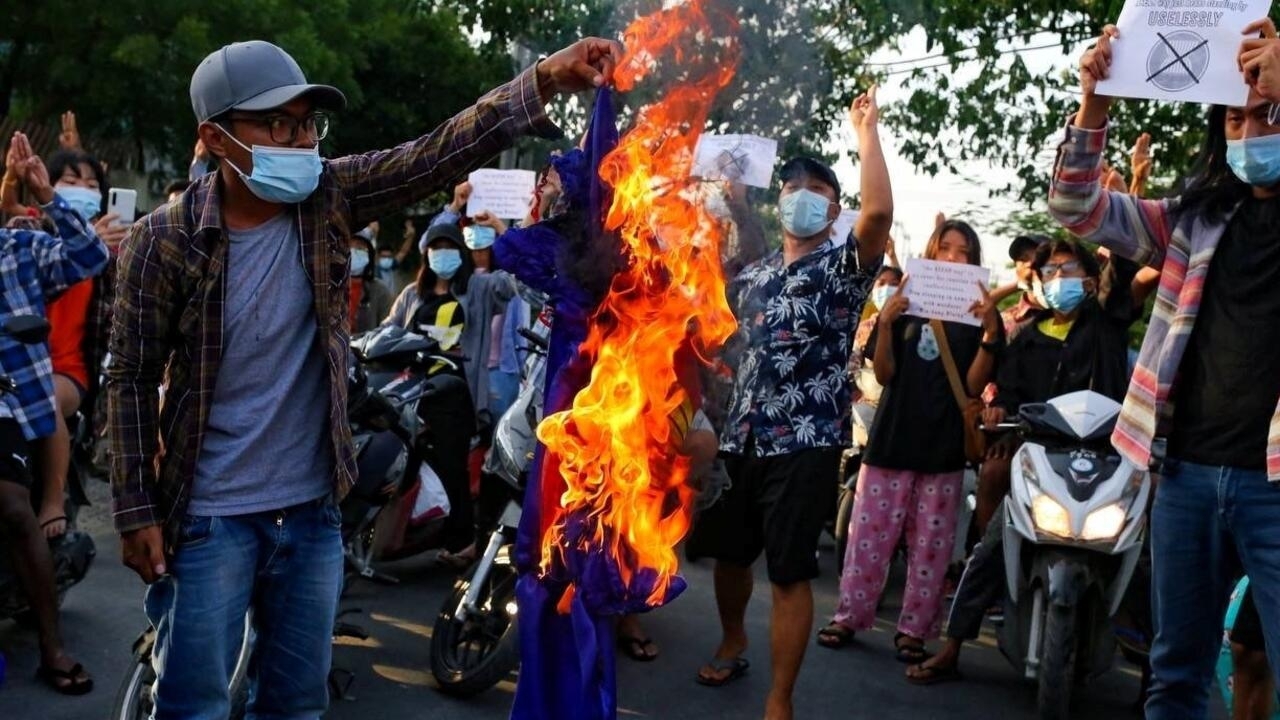 The crashes in Myanmar’s Ayeyarwady River Delta region left 20 people dead on June 5. The fight between the followers of the democratically elected government and the military, who caused a coup on February 1, continues to intensify as the weeks go by.

The political crisis in Myanmar seems to be far from being solved and with the passage of weeks it is acquiring warlike overtones in several regions. This Saturday, the local news agency Khit Thit Media and some foreign media reported 20 dead in clashes, which adds up to 847 so far. The forces of the military junta, led by Min Aung Hlaing, clashed with villagers armed with catapults and crossbows in the Ayeyarwady River Delta region.

According to Reuters, the events occurred after villagers tried to counterattack soldiers who wanted to search the home of a neighbor accused of hiding weapons. In many rural sectors of the country, citizens have taken up arms in the presence of the Army, which tries to have de facto control over as much land as possible.

“The townspeople only have crossbows and there are many casualties on the side of the people,” a neighbor told the news agency, who for fear of reprisals asked not to be identified.

Ayeyarwady is an important rice growing area that has large populations of the Bamar majority ethnic group, from which a large part of the Army gets its recruits.

These violent episodes were not isolated. Today, Sunday, protests against the military continue in several important and populated areas of the country, including Rangoon and Mandalay, two of the main cities. Citizens of these fundamental economic centers have repeatedly spoken out against the February 1 coup and in favor of the release of the country’s political leader, Aung San Suu Kyi.

The demonstrations against the military junta have been daily for four months. The stability that the military forces expected has not yet been achieved. The country is paralyzed by strikes, while conflicts with ethnic groups with the army in the border areas of Myanmar do not stop. The pro-democratic demonstrations have been joined by the actions of the different ethnic guerrillas in the nation, who also oppose military power.

The military returned to power on February 1, with the coup that overthrew the elected leader Aung San Suu Kyi, who is in detention.

This week, the leader of the board, Min Aung Hlaing, met with the Association of Southeast Asian Nations (ASEAN), and with the International Red Cross, in a scheduled regional summit that sought a solution to the current situation in Myanmar, but there was no result.

State broadcaster MRTV showed the meeting and gave a general summary of the discussions among the attendees.

The reactions on the part of the detractors to the military junta did not wait. Members of the Government of National Unity rejected ASEAN’s meeting with Min Aung Hlaing because they believe it gives it legitimacy. They also demanded to be received by the Asian bloc.

Another response to the ASEAN commission’s visit was that, in the city of Mandalay, some outraged citizens burned the ASEAN flag.

The Government of Thailand is concerned that the crisis continues in Myanmar and refugees are arriving on its territory in large numbers. Both countries share border limits.

Thailand criticized that the military junta was not paying attention to the “consensus” of the five points that were agreed with ASEAN in April, including an end to violence and political talks.

“We have been closely following developments in Myanmar with great concern, especially incidents of violence in many parts of the country,” Foreign Ministry spokesperson Tanee Sangrat said in a statement.

Sangrat insisted on calling for an end to the violence, as well as demanding the release of the more than 4,500 people who have been detained.