At high water switch: Laschet forgets the name of the WDR presenter several times – then it’s enough for her 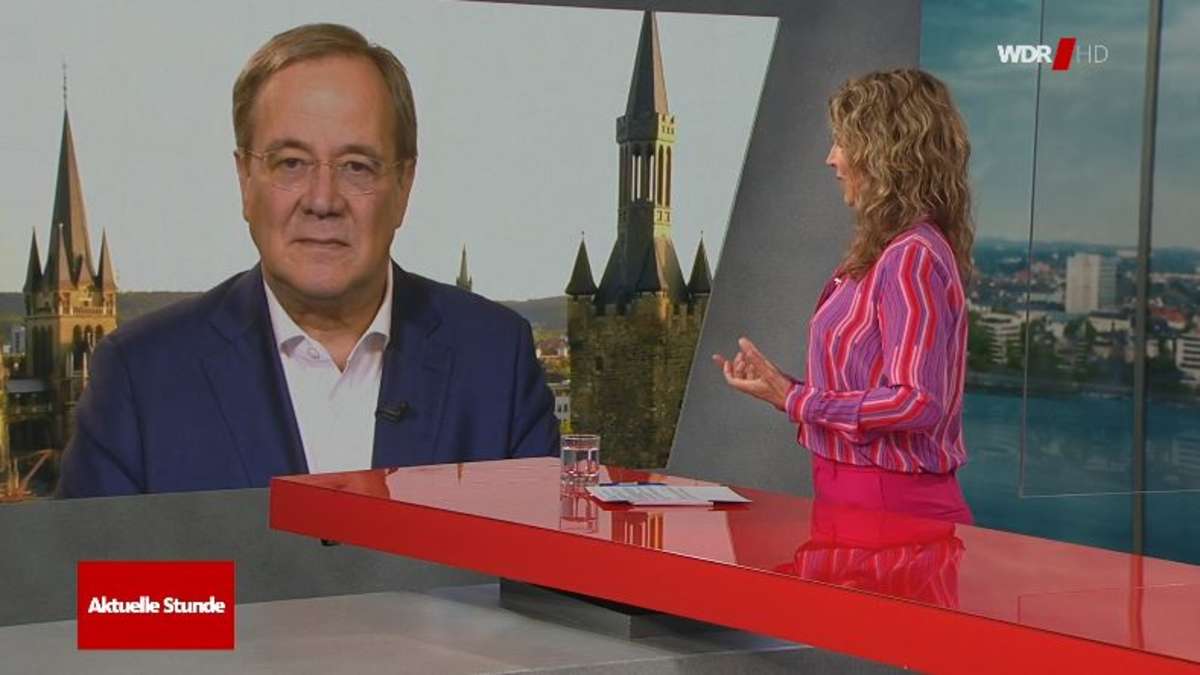 Armin Laschet comments on the severe weather catastrophe in his state. The moderator persists. The Union candidate for Chancellor then went wrong.

Aachen – The storm catastrophe in western Germany shook the country – and German politics. Union chancellor candidate Armin Laschet canceled his visit to the CSU conference in Seeon at short notice in order to travel to his state of North Rhine-Westphalia. On Thursday evening (July 15th, 2021) he was a guest on the WRD program “Current Hour”. Visibly taken by the events, he made several mistakes in the name of the presenter. His comments on climate policy caused outrage on social networks.

The federal states of Rhineland-Palatinate and North Rhine-Westphalia in particular were hit hard by floods. Even after the heavy rain has stopped, the situation in the disaster areas remains tense. At least 80 people are said to have lost their lives and dozen are missing. According to the Federal Ministry of the Interior, 15,000 rescue workers were last on site – some of them at risk of death.

Laschet several mistakes happen: Then it is enough for the WDR presenter

In the WDR broadcast, Laschet spoke to presenter Susanne Wieseler about the flood disaster in his state. The interview was at the end of the day on which the NRW Prime Minister was out and about in the affected areas. Previously, the North Rhine-Westphalian Prime Minister had called for more speed in climate protection. When the Union Chancellor candidate began to enumerate the climate protection measures of his state in the manner of an election, Wieseler interrupted him. “Mr. Laschet, I know that, I know the numbers, I know the date, I know when we will get out of brown coal. But so far you have not exactly attracted attention as a climate protection activist, ”said the journalist. Laschet was sensitive. It is currently not about party politics, but about overcoming this crisis.

The WDR presenter won’t let him get away with it: For Wieseler, the disaster is a turning point. People would now have experienced the consequences of climate change for themselves. “You say you are doing something to protect the climate, but you are doing it in fine doses, you are not turning the wheel around,” the journalist became clear.

And then Laschet made the first mistake in his name: “Sorry woman … because now is such a day, you don’t change politics. The goal of reducing CO₂ must be long-term. We have sevenfold the sums for climate protection. In NRW we are in the process of changing our industry, the steel industry, the chemical industry so that no CO₂ is emitted, ”said the CDU politician. Later, Laschet again had problems remembering the name of his interview partner. It was enough: “My name is Wieseler.”

Climate crisis: Laschet’s remarks on the flood disaster cause trouble on social networks

The CDU chancellor candidate was noticeably emotional during the interview. The CDU politician seemed to be particularly affected by the death of the 46-year-old firefighter and family man, who died in Altena on Wednesday (July 14th) while fighting the floods.

Apparently no excuse for many viewers. Laschet’s remarks on climate policy did not go down well with some Twitter users. “… the climate target is a long-term goal? …” But we don’t have any more time, Mr. @ArminLaschet, “was a comment. And someone wants to know: “‘Because this is the day you don’t change politics.” How many days of this kind have to come before ‘you’ change politics? “Another user accuses him of campaigning in crisis mode:” Because this is a day like this, you don’t have to use it as an instrument for your election campaign. “

Apparently, the politician’s influence on the Rhenish language also caused irritation. Many Twitter users said they heard Laschet say “Sorry, young woman”. And criticized that. As a result, the hashtag “JungeFrau” trended on the short message service. mirror-Journalist Markus Feldenkirchen stepped in and commented: “Tschuldijung, but anyone who seriously believes that Armin Laschet addressed the WDR colleague @WieselerSusanne with #JungeFrau, has never loved or understood the Rhenish language. He forgot your last name, maybe the result of a good, sharp interview ”. Wieseler himself reacted and defended the NRW Prime Minister on this point. She replied to the tweet: “That’s how I see it – and I hope that there is this causal connection.” (aka)