Assault on jeweler in Celle: Trial of only defendant started 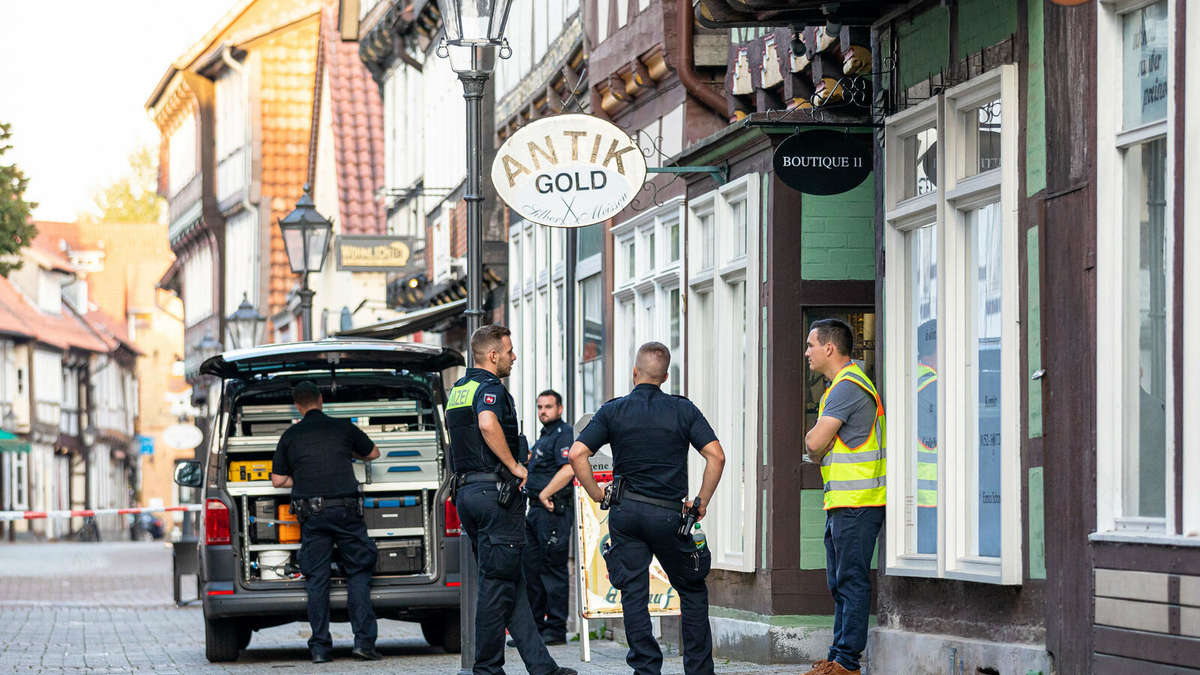 On September 14th, three men attacked a jewelry store in Celle (Lower Saxony). Two were shot. The third man will be on trial from Tuesday. The first day of the negotiation only lasts a few minutes.

Update from May 4th, 3:50 p.m .: With a large media presence, the 38-year-old, dressed in dark clothes, is handcuffed into the courtroom; the man hides behind a red folder from photographers and camera teams. The accused is the only survivor of a trio that attacked a jeweler in Celle on September 14th. His accomplices were shot in self-defense by the 73-year-old. At the start of the trial before the Lüneburg district court, the man is silent on Tuesday – he is said to have been the escape helper. “Not at the moment,” said the defense attorney regarding a testimony.

The 11th Large Criminal Chamber is negotiating because of jointly committed attempted grave robbery. The public prosecutor’s office accuses the defendant of having made an appointment with his brother and another person involved. The brother pushed the third person in a wheelchair. The public prosecutor put it “no suspicion” should arise at the jeweler.

The trial takes the couple, who appear as co-plaintiffs, very much, reports attorney Felix Matzeit. “It was particularly emotional and difficult for my client, she experienced everything all over again,” says the lawyer from Celle. The 71-year-old wife even got scared again when the defendant’s handcuffs were removed. “She had the feeling that he could get up at any moment”.

The start of the trial was over a few minutes after the indictment had been read out; the currently overburdened court had only set the date to meet deadlines. A total of eight further negotiations are scheduled. The trial will continue on May 19, and a verdict is planned for mid-July.

Original report from May 4th, 10 a.m .: Eight months after the attack with two dead on a jewelry and antique shop in Celle *, the trial against a 38-year-old in the Lüneburg district court begins. From Tuesday on, the 11th major criminal chamber will be negotiating for jointly committed attempted grave robbery. The public prosecutor’s office accuses the defendant of having arranged to meet his brother and another person involved. He is said to have set off with his brother on September 14th from Waltrop in the Ruhr area, picked up the third one en route and dropped both off in Celle. The brother pushed the third person in a wheelchair.

The defendant is said to have parked the getaway vehicle and kept in contact. The other two are said to have entered the shop with handcuffs, a gun, a hand ax and a knife. There, the man jumped out of the wheelchair over the counter and lunged at the jeweller’s wife in order to choke her and handcuff her.

The jeweler then entered the sales room and was threatened with a firearm by the brother. The jeweler then shot both perpetrators with a gun. The brother died on the scene, the other person involved later succumbed to his injuries.

When the perpetrators did not return to the car, the defendant is said to have fled alone. The police arrested him in North Rhine-Westphalia in November. According to a court spokeswoman, only the indictment is read out at the start of the trial. Eight days of negotiation are scheduled for the process.

The manslaughter case against the shopkeeper had been dropped. The public prosecutor’s office in Lüneburg assumed that the senior had acted in self-defense. He and his 72-year-old wife were shocked in the attack.

Time and again, jewelers are the target of armed robbery, and in some cases owners or employees have been injured or killed. It is not unusual for the owners to have a weapon * themselves for protection. (With material from the dpa) *Kreiszeitung.de is an offer from IPPEN.MEDIA.