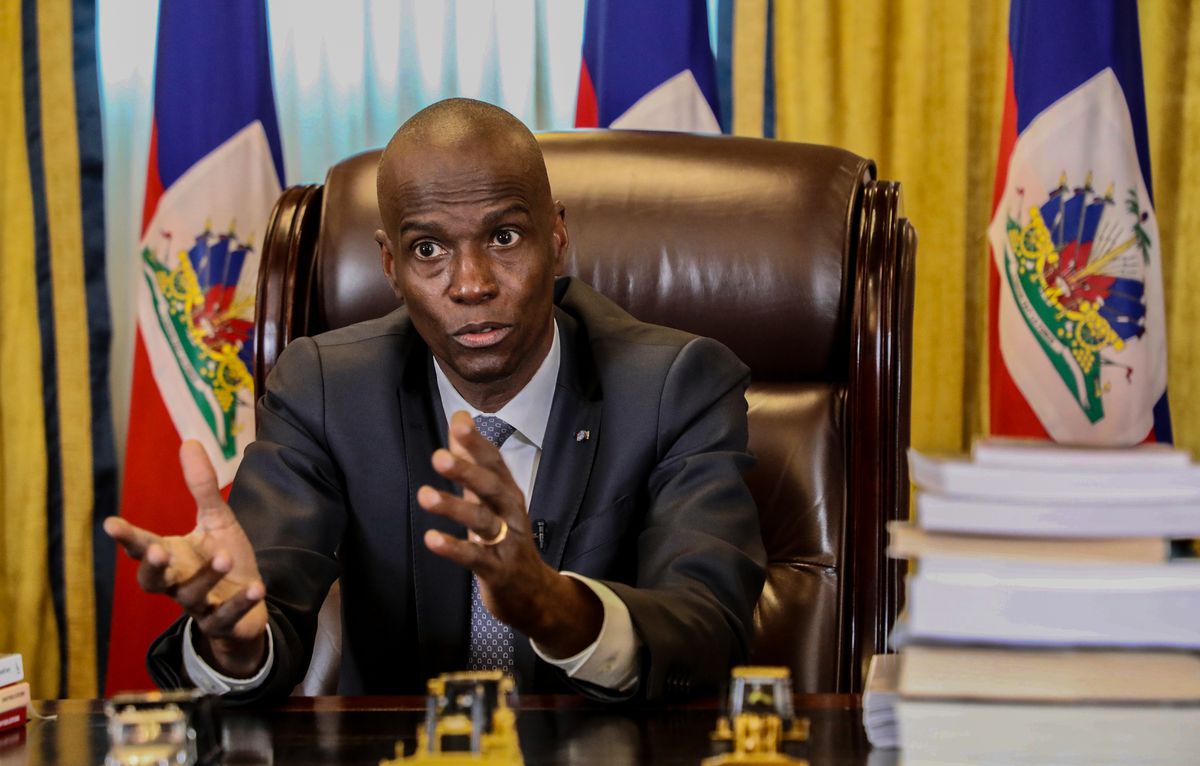 It was 1am on Wednesday in Peregrin 5 street, in the Pétion-Ville neighborhood of the capital, Port-aux-Princes. Haiti’s president, Jovenel Moïse, was asleep with his wife when a group of armed men who spoke both Spanish and English, according to the official communique from the Haitian government, broke into the elegant residence, entered the bedroom and opened fire. Moïse, 53, was killed instantly and his wife is in hospital in a stable condition with a bullet wound. Whether one of the president’s security detail facilitated access or it was an operation planned by one of Moïse’s considerable number of enemies remains a mystery. The witness statement of his son, one of the first people to arrive on the scene, and some video footage are the only evidence that exists at the moment.

Haiti’s prime minister, Claude Joseph, called on the population to remain calm and said that the police and the army have been called in to maintain order. “The situation is under control. I am in a meeting to ensure security and to take all the measures necessary for the continuation of the state, ”Joseph said. After the meeting, the prime minister declared a state of siege, a term that places the armed forces in charge of guaranteeing security and which allows for the setting up of military tribunals. Hours after the assassination, Communications Minister Frantz Exantus announced that the “suspected killers” had been arrested after an operation carried out in the Pelerin neighborhood of Port-aux-Princes.

Moïse’s death has pushed Haiti into a period of uncertainty and increased fears that the country could be on the verge of becoming the “Somalia of the Americas,” as some analysts have described it. On top of the humanitarian crisis provoked by the coronavirus pandemic and the damage done by hurricanes, increasingly violent gang warfare has raised the terror level in Haiti through a series of killings and kidnappings. Meanwhile, political chaos appears to have installed itself as the only form of government in the poorest nation in the Americas, and one of the most impoverished worldwide.

The president’s assassination has sent shockwaves through Haiti’s political and diplomatic class, coming just over two months before presidential and legislative elections slated for September 26. It had already been established that Moïse would not be able to run for office and as such the elections were viewed by the international community as the accepted route map to guide Haiti out of its crisis. The opposition had accused Moïse of clinging on to power and governing by decree after the dissolution of the National Assembly. In an interview with EL PAÍS, the president said that he intended to step down in 2022 on the basis that his actual installation in the position had not come about until 2017, later than anticipated.

Moïse’s assassination has been compounded by the power vacuum the country has been submerged in, given that in the aftermath of the attack it is still unclear who is running the machinery of government in Haiti. Before his death, Moïse had named a prime minister who has still yet to be ratified and it remains unclear if he will be given the green light to take the reins of government. The appointment also sparked an internal war in the ranks of the president’s Haitian Tèt Kale Party, adding several more people to the long list of enemies who sought his removal from office.

Moïse assumed power in 2017 after a controversial election that had to be repeated, but which he subsequently won with a clear majority and without the need for a second round of voting. After breaking off trade relations with Venezuela, Moïse’s mandate was dogged by several crises stemming from accusations of corruption linked to Caribbean oil alliance PetroCaribe, which were Chavismo’s way of exacting revenge for Haiti turning its back on Caracas to embrace the policies of then-US President Donald Trump. Last February, Moïse condemned a failed coup d’état and assassination attempt, after which a Supreme Court judge declared him the legitimate president. “The coup d’état is not a one-off event, but rather a series of actions. Until now, governments have been puppets of the economic groups, but this is no longer the case and our decisions have not gone down well with those who believe themselves to be powerful and untouchable. A small group of oligarchs who want to take control of the country is behind the coup, ”Moïse told EL PAÍS at the time.

Over the last 35 years, the first Latin American country to win its independence – when in 1803 Pétion and Dessalines’ men put thousands of Napoleon’s occupying troops to the sword – has had 20 different presidents of varying profiles, from generals to evangelical preachers. Moïse was elected in 2015 on the campaign promise of bringing running water and electricity to the entire country. Following Joe Biden’s election victory, the US State Department, the Organization of American States and the Core Group of Haiti-supporting nations including Canada, the US, France, Spain and Brazil, backed the idea of ​​Moïse seeing out his mandate until 2022, with the caveat that the president must restore the country’s legislative powers.

After a successful election campaign on the back of a slogan that said “we will all eat from the same table,” Moïse assumed power with 55% of the vote and a long list of promises that failed to materialize, causing widespread disillusion. The wave of violence and kidnappings has led to a population with more weapons at its disposal than ever before, according to analysts consulted by EL PAÍS, to despair. At the same time, social decay maintains its incessant rhythm and every day flights arrive in Port-aux-Princes with hundreds of deportees from the US, many of them children.