“Artillery fire” in a highly explosive situation? Attacks on schools and kindergartens 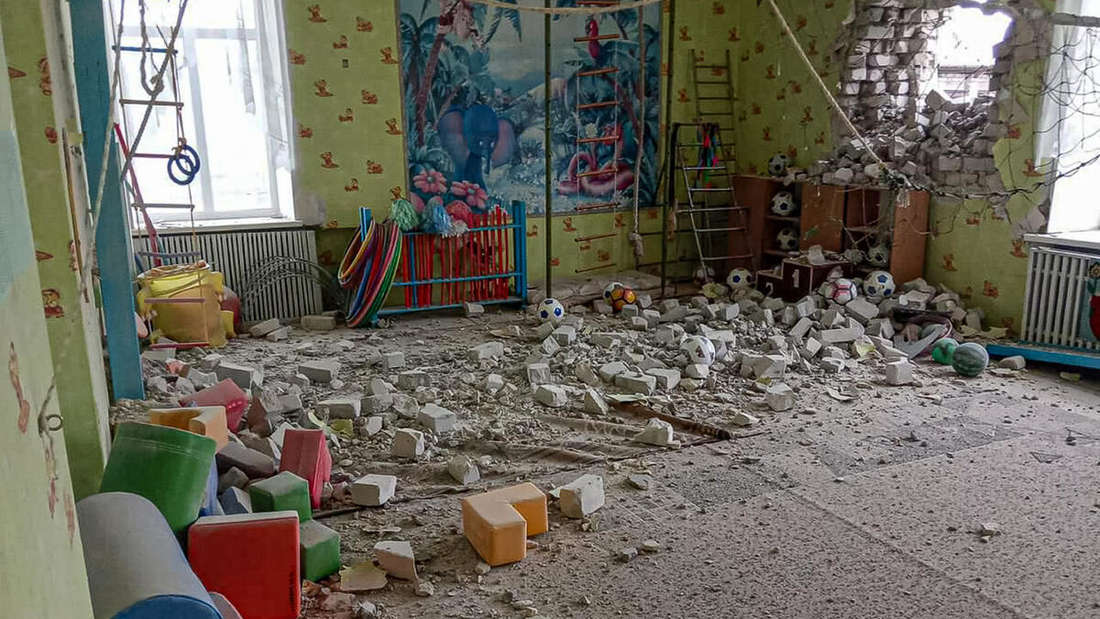 There have apparently been several military attacks in eastern Ukraine. The conflict with Russia seems to be getting worse.

Luhansk – Russia has announced that it will withdraw troops in the Ukraine conflict. The invasion feared for this week has not materialized for the time being, but there is no sign of the situation easing. On the one hand, this is shown by the skeptical assessments of the West, which does not want to trust the troop withdrawal announced by Russia. And on the other hand the latest developments in eastern Ukraine.

Ukraine conflict: Artillery shelling of a kindergarten near the Russian border

There were apparently attacks on Thursday morning (February 17). The command center of the Ukrainian military in the east of the country said Russian-backed fighters shelled the village of Stanyzia-Luhanska with heavy artillery. A kindergarten was hit. According to OSCE observers on the ground, there was “artillery fire”. The scene is in Ukrainian government territory. Three adult civilians are said to have been slightly injured. Photos and videos showing a devastated kindergarten building are circulating on the Internet. The children were apparently in another room.

After the attack on the kindergarten, a school also came under fire. In Popasna, a few kilometers from the Russian border, there was an attack by artillery systems (howitzers), the city administration reports. The school was missed – intentionally or not. The children were brought to safety. The city authorities wrote: “It is known that the enemy shelled the streets, which is prohibited under the Minsk agreements.” The British newspaper Guardians also reports on a shelling on the Ukrainian-controlled border town of Hirske. No one was injured in this case either.

Ukrainian President Volodymyr Zelenskyy then turned to the Organization for Security and Co-operation in Europe (OSCE) and to diplomats – with a request to stay in Ukraine. Zelenskyy said on Twitter that he had informed EU Council President Charles Michel about the “provocative shelling”. Ukrainian Foreign Minister Dmytro Kuleba called on Ukraine’s allies to “quickly condemn this gross violation of the Minsk agreements* by Russia amid an already tense security situation*”.

Eastern Ukraine: Separatists and army blame each other

The reports of the attacks come at a time when much seems unclear in the Ukraine conflict*. Ukraine and Russia accused each other of violating the current ceasefire on Thursday. The Moscow-backed Luhansk rebels claimed that dozens of mortar shells were fired at several locations in the Luhansk region, especially in the morning hours. Insurgent positions in the Donetsk region were also fired upon. The rebels returned fire. According to the Ukrainian government, the separatists violated the ceasefire more than 30 times during the day.

Neither side reported any fatalities in their own ranks. Independent representations were initially not available. In the past few days, the OSCE ceasefire monitors had identified fewer violations on average than in the previous year. This is probably also due to the fact that Russia has relocated soldiers and the Ukrainian side is being urged not to return fire.

Explosive: The Russian parliament has submitted a motion to recognize the “people’s republics” of Donetsk and Luhansk, which have broken away from Kiev, as independent states and thus no longer regard them as part of Ukraine. Should this proposal be waved through, Russia would have a reason to invade Ukraine.

The conflict continues. Western-backed government forces have been fighting Russian-backed separatists in eastern Ukraine since 2014. According to UN estimates, more than 14,000 people have already been killed, mostly in the separatist area. A peace plan from 2015 is not implemented. (as/dpa) * Merkur.de ist an offer from IPPEN.MEDIA

Panama, forge of women who leave their mark