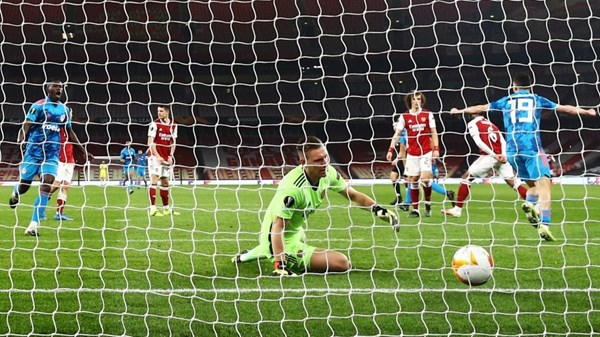 On Thursday, Arsenal and Rome qualified for the quarter-finals of the European League “Europa League” football competition.
Arsenal reached the quarter-finals despite being defeated by Greek side Olympiacos, 1-0, in the second leg of the round of sixteen of the competition.
Arsenal had won the first leg 3-1, to qualify for the quarter-finals, beating on aggregate.
Youssef El Arabi scored the only goal of Greek Olympiakos in the 51st minute.
The match saw Olympiacos player Osino Pa being sent off in the 84th minute after receiving a second warning for his strong entry to Gabriel Martinelli, the Arsenal player.
In turn, Roma climbed to the quarter-finals, after their precious and deserved victory 2-1 against Shakhtar Donetsk of Ukraine in the second leg of the round of sixteen of the continental competition.
Roma had won 3-0 in their stronghold of their Ukrainian counterpart in the first leg last Thursday, to win the candidacy card.
The two teams were unable to score during the first half, which ended in a 0-0 draw.
In the second half, Spaniard Borja Mayoral scored for Roma in the 48th minute, but Junior Moraes scored the equalizer for Shakhtar in the 59th minute.
Mayoral hit the net again in the 72nd minute.

First bilateral meeting between China and the US