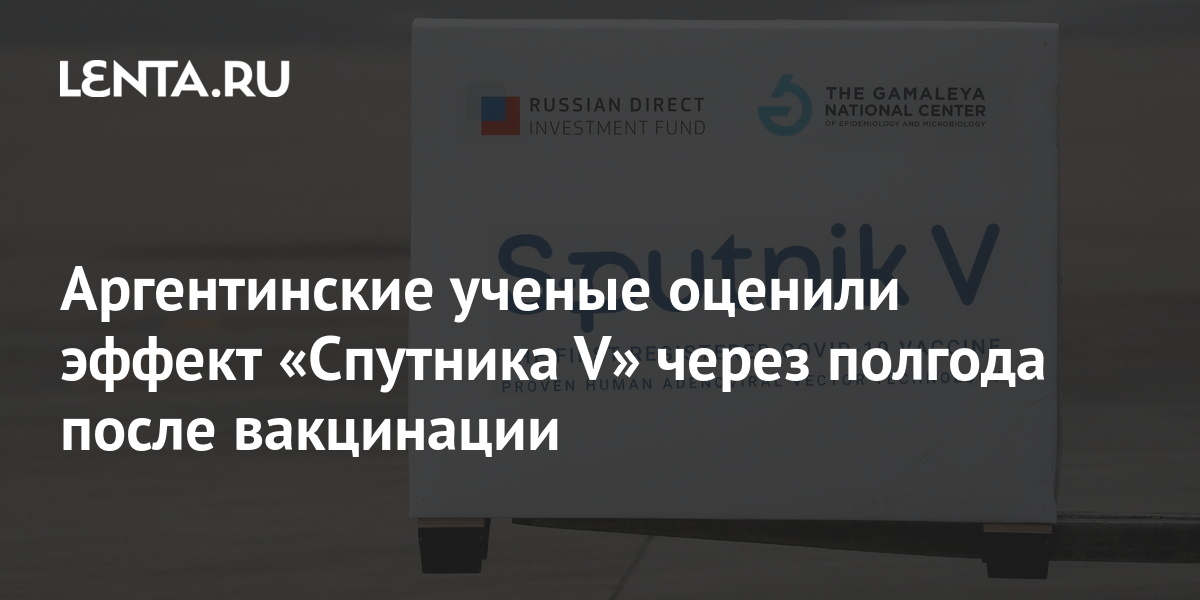 Scientists from Argentina evaluated the effect of Sputnik V six months after vaccination. They found that the neutralizing strength of antibodies that is produced after vaccination only increases over time. It is reported by Interfax with reference to the Russian Direct Investment Fund (RDIF).

The researchers analyzed the number of antibodies and their ability to neutralize coronavirus infection and its variants on 1.8 thousand blood serum samples of people vaccinated with Sputnik V. Samples were received between January and August 2021.

Ministry of Science, Technology and Innovation of Argentina

on the strength of antibodies after vaccination with “Sputnik V”

The researchers also analyzed the drug’s effectiveness against various COVID-19 variants that are found in Argentina. It turned out that antibodies are able to block the infection caused by the “delta plus” strain.

At the moment, about 60 countries have registered the Russian vaccine. In addition to Russia, vaccine production is underway or is being prepared in Hungary, Brazil, Kazakhstan, Belarus, Slovakia, Argentina, India, South Korea, China, Germany, Italy and Egypt.

The management of the St. Petersburg university raises the question of the advisability of issuing diplomas to covid dissidents

Earlier, the Indonesian authorities approved the Russian Sputnik V coronavirus vaccine for emergency use. The head of the country’s Food and Drug Administration, Penny Lukito, stressed that the vaccine has passed all the necessary tests before being approved. According to her, the effectiveness of the vaccine in preventing infection with coronavirus infection is more than 91 percent. Indonesia became the 70th country in the world to register a Russian drug for COVID-19.

On July 1, employees of the laboratory of biological agents and reagents Birmex said that in Mexico they will begin to produce the Russian vaccine against coronavirus “Sputnik V” from an active component. “At the initial stage, we can produce about 7 million doses of Sputnik V vaccine per month, and the production is expected to reach 20 million doses per month,” said laboratory director Pedro Centeno.

The Republic of the Philippines also approved the use of the Russian single-component vaccine Sputnik Light as part of an accelerated procedure.

In June, Spanish Prime Minister Pedro Sanchez called on to allow those vaccinated with Sputnik V to enter the European Union.

I dare say that these are obviously vaccines, so they should not be an obstacle to moving between continents or visiting the European continent.

on permission to enter the vaccinated “Sputnik V”

Italian Prime Minister Mario Draghi, in turn, said that the approval of the Russian Sputnik V vaccine in the EU was under threat. He believes the EU may never approve the Russian drug.

In July, Kremlin spokesman Dmitry Peskov said that Russian vaccines are quite effective even against new strains of COVID-19. He expressed confidence that if political and lobbying prejudices were removed, the Russian vaccine would be recognized in the EU.

on the recognition of Russian vaccines in the EU

On August 20, the Russian Direct Investment Fund (RDIF) disclosed the results of clinical trials of a combination of vaccines against the coronavirus AstraZeneca and Sputnik Light in Azerbaijan.

about the combination of “Sputnik V” and AstraZeneca

According to preliminary data, the first 20 participants in the studies noted the development of antibodies to the spike protein (S-protein) of the SARS-CoV-2 virus.

In Argentina, with the assistance of RDIF, a study was also carried out on combinations of a Russian vaccine with a drug from the American company Moderna. According to the Deputy Minister of Health of Buenos Aires Daniel Ferrante, the study showed a good result.

The English flag is rented from Genoa, but the British have not paid the rent for 250 years