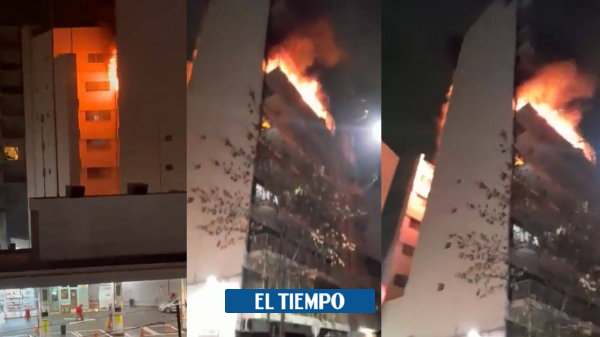 Two women and three children died this Thursday because of a fire that broke out at dawn in a building in the Argentine capital, Buenos Airesduring which 35 people were injured, including neighbors and police and rescuers, reported emergency agencies.

The deceased managed to be evacuated alive, but died when they were transferred to the hospital, said Alberto Crescenti, director of the SAME emergency service.

They are five members of the same family of eleven members (a couple and their nine children). The father was hospitalized and remains in serious condition with burns to his face and respiratory tract.

“The man is hospitalized with mechanical assistance at the Rivadavia hospital. He is delicate. The other hospitalized boys are going to get ahead,” Crescenti said.

At least five people died and another 18 were referred to hospitals in the city of Buenos Aires, as a result of the fire that broke out on the sixth floor of a building located in Ecuador at 100, reported the head of SAME, Alberto Crescenti. pic.twitter.com/P8APaDFxVR

The fire started around 6 am local time on the seventh floor of a building in the central Buenos Aires neighborhood of Recoleta, which quickly expanded to the eighth floor, said fire deputy commander Pablo Giardina.

Due to its magnitude, the firefighters attacked with several lines simultaneously, with a hydro-elevator, in order to control it and then extinguish it, and eight fire crews and 22 SAME ambulances participated, in addition to the local police. The causes of the fire are still unknown, but it has already been controlled, according to Giardina.

The deceased people had been rescued alive and unconscious from the apartment where the fire started, but arrived lifeless at hospitals due to inhalation of smoke, hot air and toxic elements of the fire, Giardina added.

Prosecutor Sebastián Fedullo, in charge of the investigation, told the press that “preliminarily it would be accidental and no device would have exploded. We rely on the skills of the firefighters.”

Fire in a residential building in the early hours of the morning of 06/23/22 in the Recoleta neighborhood where three minors and two women died and another 30 people were transferred to various hospitals.

We work in coordination with the Jewish community of the city of Buenos Aires, which was present from the very beginning.

Next to the 14-story building where the fire started, there is a compressed natural gas station (CNG), which caused deep concern until the fire was controlled, Crescenti said.

The spokeswoman for the Presidency, Gabriela Cerruti, expressed at a press conference “the desolation of the national government in the face of the fire”, she sent “condolences to the families of the victims” and proposed “collaboration” with the Government of Buenos Aires and the families to “get out of this tragic situation”.

Earlier, the mayor of Buenos Aires, Horacio Rodríguez Larreta, had gone to the scene of the fire to offer his condolences to the families and acknowledge the members of the city’s emergency system who provided assistance.

The Pope orders the publication of archives on the Holocaust
– Do you like to smoke Juul? You will no longer be able to do it in the US due to a new ban
– The list of countries that most punish corruption, is Colombia included?

Man throws a "coyotito" on the train tracks that almost cost him his life in Mazatlán, Sinaloa