Argentina on Messi’s departure: “a bomb that shook the world” 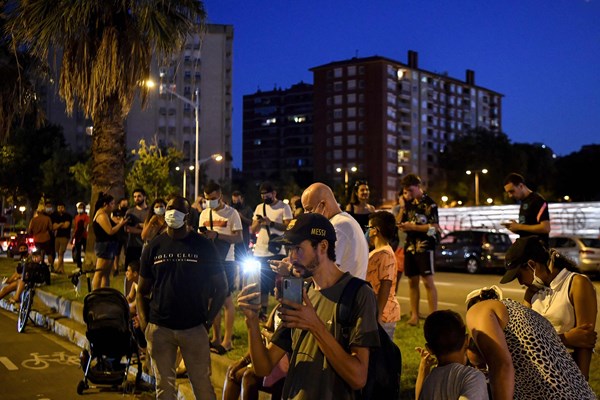 Argentine newspapers described the news of the departure of its legend, Lionel Messi, from the ranks of Barcelona, ​​​​as the “bomb” with global repercussions.
Less than a month after the six-time Ballon d’Or winner Messi led his country to end a 27-year wait for a continental title for himself and his country by winning the Copa America by beating Brazil 1-0 in the final, Argentina is stunned.
“It is the end of a unique and unparalleled legend,” wrote the sports newspaper, Ole.
“One of the most beautiful stories in football ends: the day we never imagined has finally arrived,” she tweeted.
On the other hand, the newspaper “La Nacion” said that this “unexpected turn” of events was “a bomb that shook world football.”
TYC Sports said in a tweet that the news was “hard to believe”, adding that it was “the end of an era that forever marked the history of football.”
While everyone is speculating about Messi’s next destination, some Argentine teams are dreaming of getting his services even though the economic reality in recession in this South American country, which is experiencing a major recession, would make the return home an even more surprising event.
The hashtag “Hello Leo” began spreading on Twitter, with images of Messi wearing the shirts of the prestigious clubs in Argentina, Boca Juniors, River Plate, Newell’s Old Boys and San Lorenzo, as well as more modest clubs such as Sacachipas.
But the local press took an immediate interest in where the 34-year-old Messi would end up.
The Clarin newspaper said, under a broad headline, “A global shock. Will Paris Saint-Germain be his new club,” noting that the French club was “the main candidate to add to its stars,” such as Kylian Mbappe and Neymar.
“Messi is at the height of his power and with his eyes on the World Cup, he will continue to bet on European football,” the newspaper added, noting that he was wooing Paris Saint-Germain.