Argentina – Brazil, the final of the 2 billion dollars: who has more hierarchy behind Messi and Neymar? 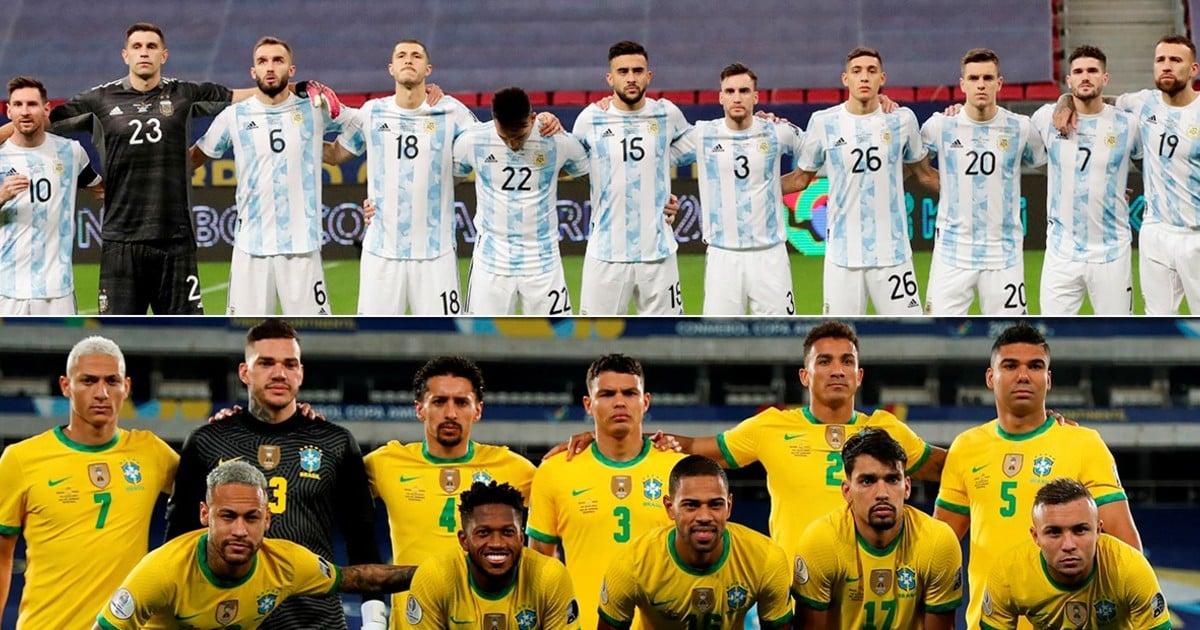 Advertising creatives should not go to great lengths to choose the men who will illustrate the preview of the Copa América final that Argentina and Brazil will play on Saturday. Face to face at the Maracana will be two of the best players in the world and also two of the best known faces in the most remote corners of the planet, capable of selling French fries, shampoo, razors, lactal bread or credit cards. Lionel Messi and Neymar. Former companions in Barcelona. Now adversaries and friends. But it will not be a duel of two. Around these superstars will orbit a group of footballers with less visibility, but with enough history and present to set up a top-level match.

To think of a football team as eleven chests full of tickets is quite rustic. With the exception, the quotation of the footballers can serve as a guide to understand the size of these selected. Taking into account the data of the specialized site Transfermarkt, on Saturday the fourth most expensive team on the planet will be measured against the ninth. And the only two in the top ten who are not European.

The 25 players that Tite registered for this subcontinental competition have a market value of 1,082 million dollars, an amount only surpassed by the teams of England (1,497 million), France (1,218) and Spain (1,084) that participated in the Eurocup. The 28 of Lionel Scaloni reach 765 million, behind Belgium (787) and in front of the Netherlands (719). On average, each member of the Brazilian team has a price of 43.27 million euros, while each Argentine footballer is worth 27.33 million.

If the comparison is taken to the competitive field, a point in common is that most of the players from both teams played last season in the five strongest leagues in Europe (England, Spain, Italy, Germany and France): 21 Argentines and 20 Brazilians. Only seven footballers (Wéverton, Léo Ortiz, Éverton Ribeiro and Gabriel Barbosa, from the Verdeamarela; Franco Armani, Gonzalo Montiel and Julián Álvarez, from the Albiceleste) represented teams from their countries. Neither of them is a starter in the Tite and Scaloni schemes.

If it is about league titles, the balance was also even in the last campaign. Sergio Agüero won the Premier League with Manchester City; Lautaro Martínez, Serie A with Inter; Ángel Correa, the Spanish League with Atlético de Madrid and Lisandro Martínez and Nicolás Tagliafico, the Eredivisie with Ajax. On the Brazilian side, Ederson and Gabriel Jesús celebrated with City; Felipe and Renan Lodi, with Atlético; while Éverton Ribeiro and Gabriel Barbosa got the Brasileirão with Flamengo. In addition, Thiago Silva won the Champions League with Chelsea and Wéverton, the Copa Libertadores with Palmeiras.

After being champion of the Eredivisie with Ajax, Nicolás Tagliafico is looking for a title with the Argentine national team (Photo: Andre Coelho / EFE)

For the two emblems of these selected it was a lean season. Messi had to settle for the Copa del Rey. And as Paris Saint-Germain saw his winning streak in the domestic league interrupted by Lille and again fell short of consecration in the Champions League, Neymar also lifted the Coupe de France just as a consolation prize.

Along with the collective successes navigate the individual performances that opened unexpected doors for many, especially on the Argentine side. An emblematic case is that of Emiliano Martínez, who earned a place in the National Team thanks to his magnificent first season at Aston Villa, which also earned him recognition by the Premier League as the best goalkeeper of the year, even ahead of the man that he Saturday will take care of the rival fence, Ederson, of Manchester City.

Emiliano Martínez, the best goalkeeper in the last Premier League and the unexpected hero of the National Team against Colombia. (Photo: Fernando Bizerra / EFE)

On defense, Scaloni also drew on footballers who were off the radar of the average soccer player. Some, simply because they were practically unknown, like Nahuel Molina and Cristian Romero. Others, because they perform (and very well) in teams with little media coverage, such as Germán Pezzella (Fiorentina) and Tagliafico (Ajax). In the case of Nicolás Otamendi, because in the City he had been quite relegated, but in Benfica he found a space again to have rhythm and competition.

On the other side, there is a high profile, experience and many hours shared. Thiago Silva played dozens of matches alongside Marquinhos during seven seasons at PSG before leaving for Chelsea in 2020. Danilo is a fixture on Juventus’ right wing. The least certain point is in Renan Lodi, who never finished establishing himself in Atlético de Madrid or in the selected team.

Casemiro, master and lord of the environment in Real Madrid and in the Tite team. (Photo: Andre Coelho / EFE)

Also in the middle Tite has a seal of quality with Casemiro, an undisputed patron at Real Madrid, and Fred, who in his third season at Manchester United finally achieved ownership in the elite. Scaloni looked for alternatives in two men with an excellent season in second-line teams, Rodrigo De Paul (Udinese) and Guido Rodríguez (Betis), and in two who played considerably less in their clubs, Leandro Paredes (PSG) and Giovani Lo Celso (Tottenham). ). In the case of Rosario, also haunted by injuries.

Among the attacking partners of the two star figures, Messi’s men arrived with very different recent backgrounds. Lautaro Martínez, after being a key player in Inter who achieved the Scudetto after 11 years: he scored 17 goals, delivered 10 assists and formed a fearsome pair with Belgian Romelu Lukaku. Nicolás González, another of Scaloni’s bets, with little filming after a year conditioned by physical ailments in Stuttgart that did not prevent him from being transferred to Fiorentina.

Lautaro Martínez scored 17 goals in the last season of Serie A. In this Copa América he has three. (Photo: Joedson Alves / EFE)

If the last months in Europe were not prolific for González, they were not prolific for Neymar’s cronies: Everton, who had an irregular first season at Benfica; Lucas Paquetá, who after disappointing in Milan was also unable to take off at Olympique de Lyon; and Richarlison, with a better start than the season finale in the Premier League, like his entire team, Everton.

Along with this photo that suggests a close final, there is a categorical fact that favors the locals: 12 Brazilian footballers were already champions with the Verdeamarela in the Copa América 2019. On the other hand, no player on the Argentine squad won a title with the senior team. The closest thing was the gold medal that Messi, Agüero and Ángel Di María won at the 2008 Beijing Olympic Games, three survivors of the old guard who on Saturday will try to break that curse that has already been 28 years old.