Architecture Mini-flats are interesting, and now the Swedes have come up with bird-box flats that could be moved 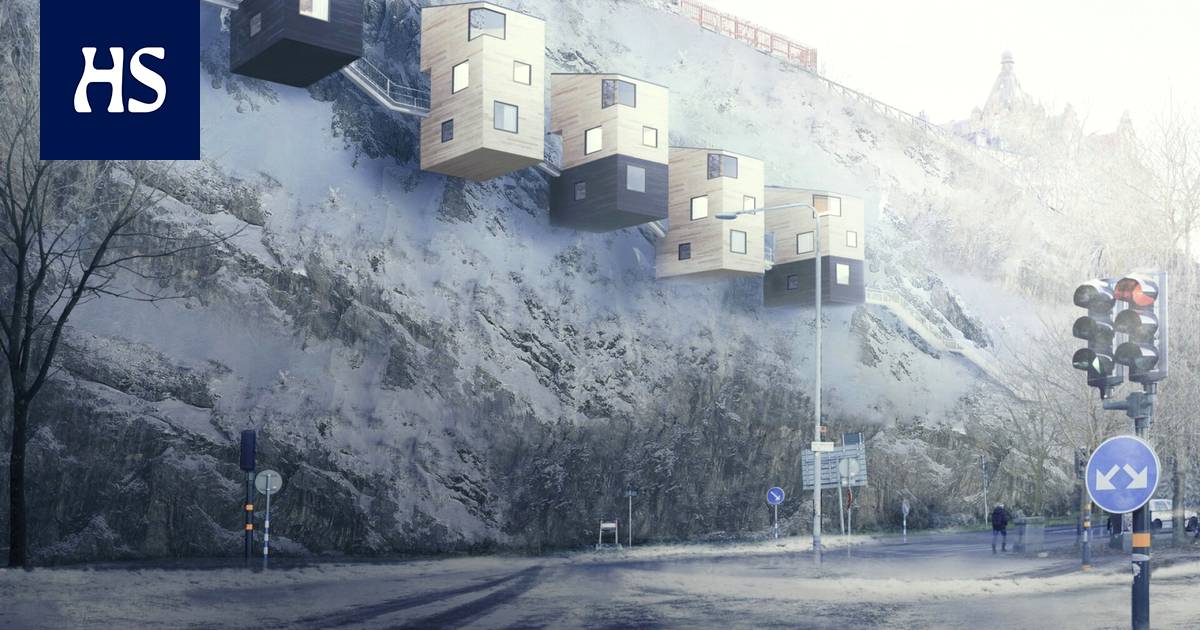 Small houses would be attached to a rock wall as upright as possible. The houses would be based on tried and tested element technology. The natural material is wood due to its light weight.

Birds have again built nests in the trees. Swedish architects Pontus Öhman and Elisabetta Gabrielli as well as a wooden house entrepreneur Michel Silverstorm believe that man can take lessons from birds.

The trio has developed Nestinbox, a small house of about 50 square meters, which is hung like a birdhouse on a vertical rock wall.

They conducted a study on the technology and economy of the building, which was completed in March. The study received support from the Swedish Construction Administration Boverket. The next step is to commercialize the plan.

Nestinbox is a three – storey little house, accessed by a balcony – style walkway. The middle floor has an entrance hall and dining area, as well as toilets and showers. The spiral staircase leads to the double bedroom. There is a living room on the top floor.

There is a rock wall on the entrance side. In the other direction, you can look at landscapes like a birdhouse or nest.

Even more more diverse forms of housing are now, in addition to urbanization, a megatrend in community development.

If the plans of the creators of birdhouse-style housing come true, there will certainly be enough competitors.

One interesting feature is portability. Mobile detached houses, often wooden, have been made for years. American Tumbleweed sells detached houses built on wheels.

Finn Minihouse proposes a relocated “nomadic house” for, among other things, the unused areas of Helsinki’s Jätkäsaari.

What they have in common with Nestinbox is the utilization of otherwise empty space. It is easy to imagine that at some point it will be invented to hang a nomadic house on a rock wall.

Caravans have sometimes been used as basic homes.

“After all, there are a lot of caravan areas on the American continent where people live in caravan houses on wheels. The local climate makes this possible, ”says the professor of architecture Markku Karjalainen From the University of Tampere.

The development has already been facilitated by enthusiasts who have also adapted vans number one dwellings.

“It must be built at least five meters above the ground so that cars and other vehicles can pass below.”

Birdcage style the biggest difference between an apartment and an ordinary house is that there is empty air below.

“It has to be built at least five meters above the ground so that cars and other vehicles can pass below,” says architect Öhman in a remote interview.

“It always makes financial sense to build more than one Nestinbox in one place. If you are building three apartments, Nestinbox requires a rock wall at least 15 meters high and about 23 meters wide. ”

Rock walls suitable for the basic solution can be found in many places. The wall area must therefore be 15 times 23 meters. Designers have mapped the rocks in the Stockholm and Gothenburg areas. There are also suitable cliffs in Norway, Switzerland and Canada. What about Finland?

First the requirement in the construction of suspended houses is strength and reliability. For the study, the developers of Nestinbox asked for the opinions of two rock construction engineers.

Each rock, of course, is examined separately in the design of the building. In general, however, it is also true that a vertical rock is a reliable foundation. Researchers also referred to examples of bridge construction, suspension bridges anchored to rock walls.

The Nestinbox is built of wood around a steel frame. The frame is attached to the rock at six points. The assurance is multiple. For strength, a single attachment point would suffice.

The steel is hidden inside the wooden elements. Wood is a natural choice as a material because of its light weight. A cubic meter of wood weighs about 450 kilograms, but a cubic meter of concrete up to 2,500 kilograms.

The model of a wall-mounted house could be even three-story. Picture: NESTINBOX

The total weight of the basic model of the apartment is about 27 tons. The house would be assembled from a few prefabricated pieces that are similar in size and weight to the existing space elements of the wooden houses.

It would take a couple of weeks to put the house in place. Before that, the attachment points must be drilled into the rock. The total construction time from order to delivery would be about a month.

Equally more important than lightness is the feel of the material. Wood is perceived as a pleasant material. The impression has been confirmed by an international study coordinated by Aalto University published a few years ago.

Swedish organizations such as Linköping University were also involved. Researchers from Norway, Austria and Britain also participated in the work.

The material of the birdhouse apartments is a CLT element, ie solid or solid wood cross-glued. The element is a multilayer board consisting of solid wood plank layers.

Direct electric heating has been selected as the heating mode. The designers were surprised to find that adding an air source heat pump is unprofitable.

Heating consultant Tomas Engdahl from a large community technology consulting firm Bengt Dahlgren AB showed that in a small building, a simple and straightforward solution is the most advantageous.

The architects write in their research report that it is easy to imagine additions to the apartment, such as balconies and elevators. However, they have been omitted for the time being.

Simplicity also means that the requirement of accessibility has had to be abandoned. The construction of facilities suitable for people with reduced mobility would have greatly increased the size of Nestinbox. An accessible apartment is a completely different project that can be tackled if there is enough demand.

“Of course, it is possible to build both smaller and larger Nestinbox models. The bigger, the harder it is, of course, to ensure strength, ”says Öhman.

Solutions that implement everything in a new way have easily remained on display.

“The erection of a wooden apartment building is very fast, as 85% of the prefabricated house has already been completed at the factory. Personally, I have joked that in the next step, the residents will be ready for the space elements already at the factory, ”says Karjalainen.

The majority of wooden apartment buildings in Finland are made using space element technology. The same technology is also popular on the Swedish side. The difference between Nestinbox and the familiar technology is mainly only the vertical “plot”.

“I don’t see anything revolutionary in that. That rock wall hanging is a pretty spectacular idea. Requires sturdy fasteners, ”says Karjalainen.

Tradition is often more of a virtue than a disadvantage in the construction industry. Solutions that implement everything in a new way have easily remained on display.

I am reminded of the famous house of the last century, an Israeli-Canadian architect Moshe Safdien designed by Habitat at the Montreal World’s Fair in 1967. The building has many concrete protrusions attached to a vertical frame in the same way as the Nestinbox. The house is still inhabited, but the idea has not been copied elsewhere.

The Finnish example is an architect Matti Suuronen designed a plastic Futuro house that was manufactured in small quantities in the late 1960s and 1970s.

The solution was expensive and rising oil prices collapsed the economic base once and for all. The mystery was whether plastic nests, which differ sharply from traditional houses, would have become more common anyway.

Quantitatively birdhouse housing does not solve the housing shortage, because there are a limited number of suitable rock walls, but qualitatively it brings something new.

If bird nest houses are to be built, a little more know-how will be created from prefabricated construction, which can also be utilized in ordinary houses.

Designers have also thought about exporting knowledge that would be digital. Finished house elements would not be transported, but know-how would be sold.

In their report, they mention Canada in addition to Scandinavia. It may seem surprising that in a sparsely populated country, there would be a need to search for space on rock walls.

The designers also briefly mention opportunities in other parts of the world. There are many mountainous areas in Africa, India and China.