“Arab Bank” supports “Your Life Donation” with one million dirhams 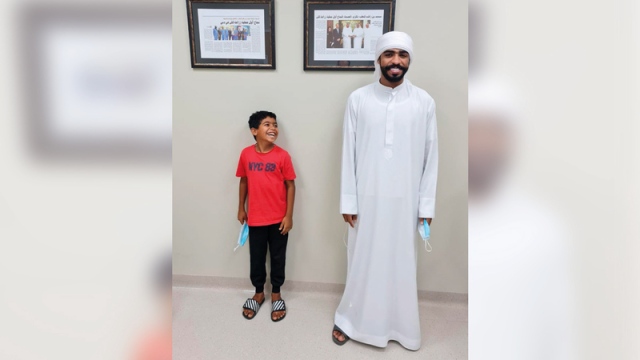 The Arab Bank for Investment and Foreign Trade has provided one million dirhams for the initiative “Donate with You is a Life”, which is adopted by the newspaper “Emirates Today”, in cooperation with the Mohammed bin Rashid University of Medicine and Health Sciences, and the Department of Islamic Affairs and Charitable Activities in Dubai. Thus, donations for the initiative reached 20 million and 710 thousand dirhams. , Enough to treat 35 patients in need of a kidney transplant.

The initiative aims to support 38 patients with kidney failure and kidney transplantation in the Emirate of Dubai, with an amount of 22 million and 670 thousand dirhams, by motivating the private sector, businessmen and community members to adopt this initiative, and to provide the necessary support to the target group.

The initiative includes a list of patients in need of a kidney transplant, including 14 children and 24 adults, including 13 citizens, a Gulf patient, three Arabs, a patient from the Comoros Islands, and 20 Asians.

The bank contributed by donating it to the treatment and transplantation of kidneys for patients included in the initiative, in addition to providing the necessary medication, and therapeutic follow-up for patients after the operation, and the operation will be performed for them and their treatment will be started at Mediclinic Hospital in Dubai, and three patients are still waiting for help to meet their medical expenses of one million and 960 thousand dirhams. .

The initiative comes within the newspaper’s initiatives in the blessed month of Ramadan, as the volume of donations for this initiative, since its launch so far, has reached 20 million and 710 thousand dirhams, sufficient for the treatment and transplantation of kidneys for 35 patients.

The Director of the Sharia Supervision Department, Secretary of the Internal Sharia Supervision Committee for Islamic Banking Services at the Arab Bank for Investment and Foreign Trade, Dr. Samia Bakhit Al-Nahdi, said: “Our contribution to the initiative (Your Donation is a Life) comes from the bank’s keenness to contribute, support and societal solidarity, which translates into state policy. In humanitarian work, especially since this initiative concerns patients with kidney failure, citizens and residents, and joy enters the hearts of these patients and their families in this holy month.

And she continued, “We call on institutions and individuals to support the community initiative, which aims to treat and transplant the kidneys for 38 patients, as it is an initiative that translates the policy of humanitarian work.”

The Director of Zakat and Charity Affairs at the Department of Islamic Affairs and Charitable Activities in Dubai, Dr. Ahmed Muhammad Al Habtoor, affirmed that “the contribution of the Arab Bank for Investment and Foreign Trade in the initiative (Your donation is a life) embodies the concept of social solidarity and solidarity between the public and private sectors, to support humanitarian initiatives and sustainable charitable projects.” , Pointing out that “the initiative aims to alleviate pain and alleviate the suffering of struggling patients and their families, by providing the best means of integrated care.”

Al Habtoor added that “the succession of contributions quickly contributes to the success of the objectives of the National Community Initiative, aimed at serving patients with kidney failure included in it, to enhance the social stability of individuals and families in the community,” praising the effective response from various sectors and individuals of society, to make a positive change in the lives of patients in need. For kidney transplantation operations.

Shamma Khalid Al-Rafi, Director of Development and Future at the Mohammed Bin Rashid University of Medicine and Health Sciences, said: “We extend our sincere thanks and gratitude to the Arab Bank for Investment and Foreign Trade for its generous donation and contribution to support the initiative, which confirms its active role in the community contribution in the UAE. We sincerely hope to achieve the goal of the initiative, and to cover the costs of kidney transplantation for the remaining patients covered by the initiative during the next few days. ”

Colleague Sami Al-Riyami, editor-in-chief of Emirates Today, said: “We thank the bank for its donation and support of one million dirhams in favor of the (Your Donation is Life) initiative, and this donation is not strange to the bank and its constant support for the community newspaper’s initiatives,” adding that “the amount of donations has reached 20 One million and 710 thousand dirhams, sufficient for the treatment and transplantation of kidneys for 35 patients, ”indicating that“ the initiative has achieved a good number in the volume of donations to a community initiative, ”calling on institutions and individuals in the state to support it.

– Three patients are waiting for assistance to meet their medical expenses of 1.9 million dirhams.

Economy – Diosdado Cabello vs. ‘El Nacional’ of Venezuela: a pulse in courts of 13 million dollars

Disney + and Sony team up: Spider-Man movies and more coming to streaming