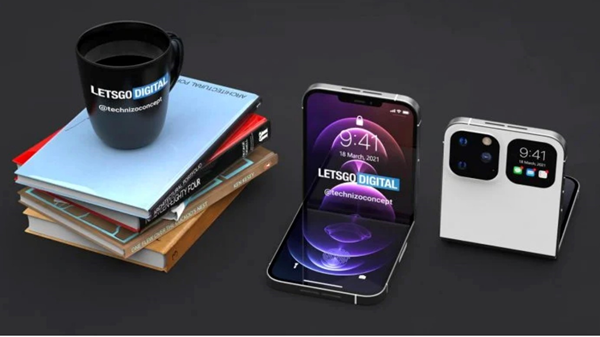 Since Samsung and two other OEMs including Motorola have released foldable models, it is only natural that people will be looking forward to Apple’s launch of foldable phones.

According to RT, graphic designer Technizo, in partnership with LetsGoDigital, has gathered information from the leaks and a few patents from Apple to come up with a possible concept design for Apple’s long-awaited foldable iPhone, which is expected to be released in 2022.

According to the website LetsGoDigital, which specializes in modern technology and electronics, the new generation of foldable iPhones is equipped with flexible OLED screens, similar in design to Motorola’s RAZR devices.

Looking at the videos that have spread recently for these devices, we notice that their structures are somewhat similar to the bodies of the new iPhone-12 phones, but they fold in the middle, and the edges of the metal frame are identical to some extent as well.

On the back side of these devices, according to the videos, a basic triple-lens camera will be installed, and next to it there is a small square screen whose size is equal to the size of the frame in which the camera lenses are installed.

The leaks also show that the main power button in these devices will be installed on the right edge of the chassis, while the volume control buttons will be on the opposite side.

It is expected that these phones will be put on the market next year, and their prices will start at about $ 1,200.