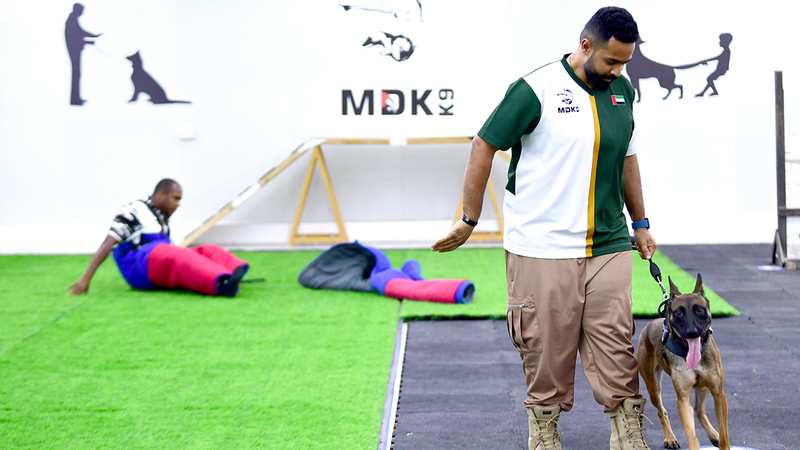 Citizen Muhammad Anwar (30 years old) turned his hobby of dog training to a special center for the rehabilitation and training of police and domestic dogs in Umm Al Quwain, where there are currently 68 dogs of various types, undergoing training courses, and 400 dogs were trained last year.

Muhammad Anwar told “Emirates Today” that he lived his childhood in raising pet dogs, and he owned three dogs of the American Attica, German Shepherd, and through them he learned how to train dogs, after they responded to him and his instructions, pointing out that with the beginning of 2014 he had Four dogs, so his father asked him to take them out of the house.

He explained that his father’s decision prompted him to furnish the center, which he called “MDK” in 2017, to train dogs, and at first he had 12 dogs, and with his move to a new branch, he had 68 dogs of 12 types.

He added that 20% of the dogs in the center are fierce and dangerous, as a team of three specialized national trainers is working to rehabilitate and train them to coexist with humans, gain their trust, and obey their orders, as dogs are transformed from dangerous groups into obedient ones. He pointed out that the rest of the dogs in the center came with their owners and they suffer from fear of dealing with others, as they are trained and adapted to deal with humans, by subjecting them to psychological rehabilitation, through mixing them with people in the center, to break the barrier of fear between them and humans, as they are pets. He pointed out that he began the year 2020 by gradually receiving customers’ dogs for training in exchange for sums of money, as the training and rehabilitation of dogs lasts two weeks to a month, depending on the type of each dog, explaining that more than 400 dogs of various international types have graduated in the center since the beginning of last year.

(Anwar) stated that he is currently working on training dogs belonging to the state’s police authorities, of the type of “Belgian Malino”, where they are trained in riot control methods, tracing, and detection of drugs and explosives, pointing out that he received offers to establish another branch in Gulf countries to train Rehabilitation of dogs.