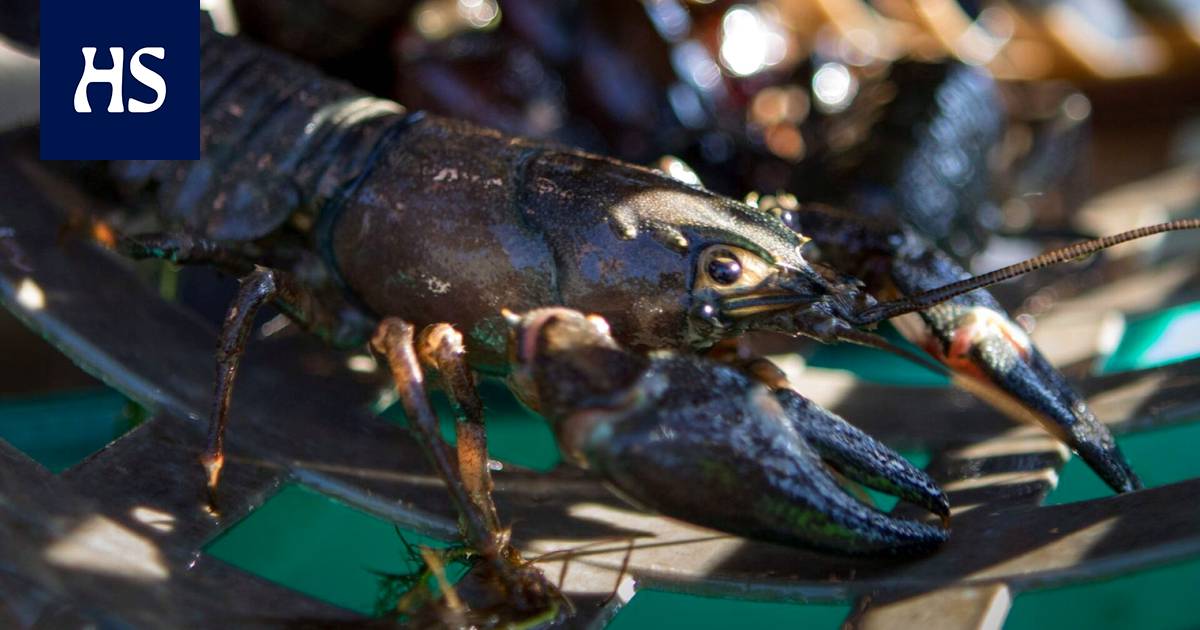 The feeling of pain experienced by the crab sparks a debate as the crab season unfolds.

“As a child it had its own mood when the catching took place in the twilight and was tense, as the crab can pinch its scissors painfully if it was not careful, ”says Tero Ahvenharjuwho is a passionate crab.

He has shaken for as long as he can remember, and the hobby has come to him as if by blood inheritance. Admittedly, the childhood “flashlight and bait on a stick” fishing method has changed to the current sea aid.

In working life, Ahvenharju had time to be a crab researcher for a long time. Today, he works at Häme University of Applied Sciences as an education manager for sustainable development.

Ahvenharju is accustomed to the fact that the traditional method of making crabs in Finland is cooking. He emphasizes that the animal should never be immersed in water that is not yet boiling properly. Also, too many crabs should not be counted for cooking at one time. These actions aim to make every death of a crab as quick and painless as possible.

“From an ethical point of view, every animal should be treated with as little pain or stress as possible, and this is also the case for crabs,” he says.

At the same time, he points out, however, that the neural structure of the crab is very different from that of vertebrates. There is no unequivocal evidence in the scientific community about how crab experiences pain or how hard the feeling of pain is.

“It is extremely important that research continues to provide the necessary additional information on the subject.”

“Many studies have shown that crabs also feel pain, so it is not recommended,” he explains.

What would be the solution to this?

“That’s the problem when the crab spoils very quickly. Of course, it is not recommended that crabs be dead at the time they are cooked, ”says Lapio.

The problem for the crab consumer is that stunning crabs is not as simple as, for example, fish that can be stunned by hitting the head. The anatomy of crabs is such that, according to Lapio, electrical stunning would be the only correct method. He also recognizes your challenges.

Read more: Britain is undergoing a law reform to improve the treatment of crustaceans and molluscs, which could ban the cooking of lobsters alive without stunning

“There are electric stunning products on the market, but they are mainly for restaurant use. They are expensive and may not be suitable for stunning all crabs.

Neither According to Ahvenharju’s assessment, electric stunning equipment is not yet available for widespread consumer use.

“We (in Finland) have hundreds of thousands of cottages. Many of them are by the crab water, and ordinary people have the opportunity to catch crabs. It is not possible for every cottage to have an electric stunter,” Ahvenharju also thinks.

Nor does he see the right way to stun the fish for a crab, nor does it see the use of a mechanical spike.

“Maybe these would only cause additional pain or at least harm”

The sea gear used in the crab works like a catfish. Suppression, on the other hand, means that crabs are gathered in groups inside a cage kept in water until there are enough of them per eater.

“A crab that died in a sump would certainly not be put in a pot, there is a clear risk (to get the bacterium). But if there was any easy-to-use electrical device that could stun the crabs just before putting it in the pot, I would definitely use it. There is no ambiguity in that, ”the enthusiast says.

In Finland There are two species of crab that can be caught: domestic crayfish and spotted crab imported from abroad and planted in Finnish waters.

“The spotted crab acts as a carrier for crab fever, so the crayfish will hardly ever return to the water body it inhabits,” Ahvenharju recalls from a sustainable development perspective.

The Confederation of Fisheries also points out that crab plague and the spread of spotted crabs are the biggest threat to a highly endangered crayfish. Problems can be prevented by disinfecting, drying or freezing crab traps before transferring them to another body of water or between different parts of the same body of water.

The baits should be caught in the same body of water where the crayfish are to be caught, but if they are elsewhere they should be frozen for three days before use. Crabs must also not be moved from one part of the water body to another, and spotted crabs must not be planted in new water bodies. Planting a crayfish also requires a permit.

According to the Finnish Federation of Fisheries, spotted crab fishing is most profitable in Häme, Pirkanmaa and Southwest Finland, while crayfish catches are concentrated in Eastern and Central Finland.

He stresses how important it would be for every crab to make sure that crab plague doesn’t spread unnecessarily because of people’s careless practices. In addition, he hopes that in the future he will have an unambiguous manufacturing method in which the level of pain experienced by the crab would no longer need to be considered.

The crayfish season began on July 21 and will continue until the last day of October. Shaking, like fishing, is subject to a permit.