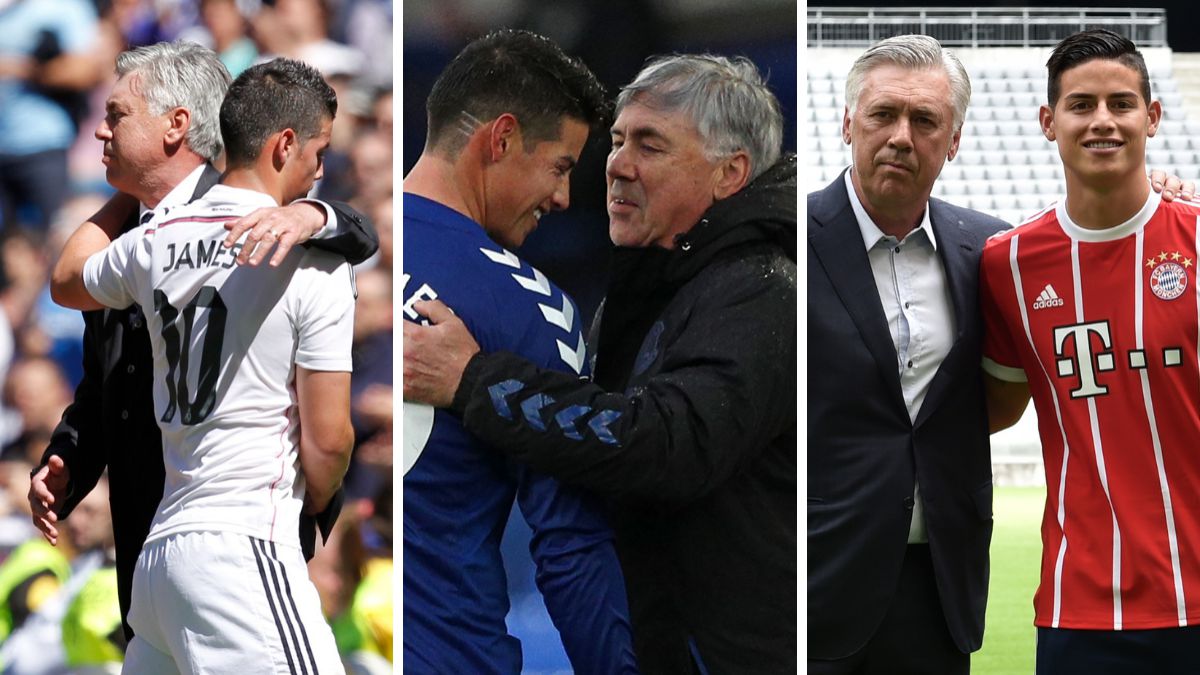 In football, connections are usually between players. Several midfielders who understand each other perfectly (see Kroos, Modric and Casemiro) or a pair made up of an attacker and a pure nine that is associated with very little and end up being the threat to the opponent. Take the example of Son and Harry Kane this season at Tottenham. We are also worth the centrals among themselves or teams that function as a whole block.

These, sometimes, are also given from behind the lime and green. Between coach and player. James and Carlo Ancelotti are the best exponents, although they seem doomed to part ways sooner than they would like. It happened at Real Madrid, it happened at Bayern and now, also, at Everton, from where Carletto has said goodbye to return to the Santiago Bernabéu.

His best year in white

James Rodríguez appeared at Real Madrid with a star poster. The then Monaco player was the best of the Colombian team at the World Cup in Brazil and the Whites went after him, leaving 75 million euros in the coffers of the Principality club.

On the bench he found the one who would not know would be the coach who would mark his career. Ancelotti fit without problems to the one from Cúcuta in the European champion’s scheme and he had his best season: 17 goals and 18 assists. A fracture in the metatarsal took him out of several games from the eleven and he did not participate in the 4-0 set in Calderón against Atlético or in the 2-1 defeat at the Camp Nou.

The team fell apart after the Club World Cup and a record winning streak that ended without titles and Carlo was replaced. James would be losing in performance and favor of the coach. First, with Benítez and then, with Zidane, with whom he was never very in tune.

A difficult stage in Munich

The first outing arrived and also, the first invitation to meet. In 2017, after James shone as a secondary in Zidane’s unit B, which was key to Real Madrid’s Liga-Champions double, Carletto convinced him to come to his Bayern midfield in the Italian’s second campaign in Munich.

The thing really did not last long. A thigh injury prevented James from starting the season. In full rehabilitation and after just 237 minutes at his command in an official game, Carlo was relieved of his position. They only had time to celebrate a goal from the coffee grower together in Germany.

“James is not the fastest player in the world, but he has a lot of quality. We have to use him to show his quality. He is not a winger, but he can come to the middle and receive the ball, he is very dangerous. I am not concerned with his pace and speed. If I was worried about that I would have signed Usain Bolt, not James “, Carlo Ancelotti said in one of his most memorable speeches of the year.

Reggiolo’s man once again trusted James and gave him a new destination in the blue part of Liverpool to remake himself and free him from a stage that did not look too good in Madrid. “Carlo was just enough for me to come here and it was a big point for me to be here. Both. Both. The club trust me when no one else did. I will always be grateful to the club and Carlo also “, assured the own James in BT Sport.

His fit in the Premier seemed difficult but, as Carlo explained, at Goodison Park the Italian created an ecosystem for him by coming “to the middle and receiving the ball” to generate danger. “In the Premier we do not play a different sport, it is football. James will have no problem adapting, “he said after his debut.

On matchday 4 he would leave his great performance of the year with two goals and an assist against Brighton and shone in the derby against Liverpool assisting Keane to make it 1-1 in a match that ended in a draw at two remembered for being the last from Virgil Van Dijk’s campaign. From there, the injuries have been weighing down his year that has ended with an end already known. Real Madrid have called Carlo Ancelotti and the Italian, once again, has left before James.

The Colombian has a contract until 2022 with an option for one more year that is in the hands of the club. Now without his soccer ‘father’, James will have to fly alone once more.