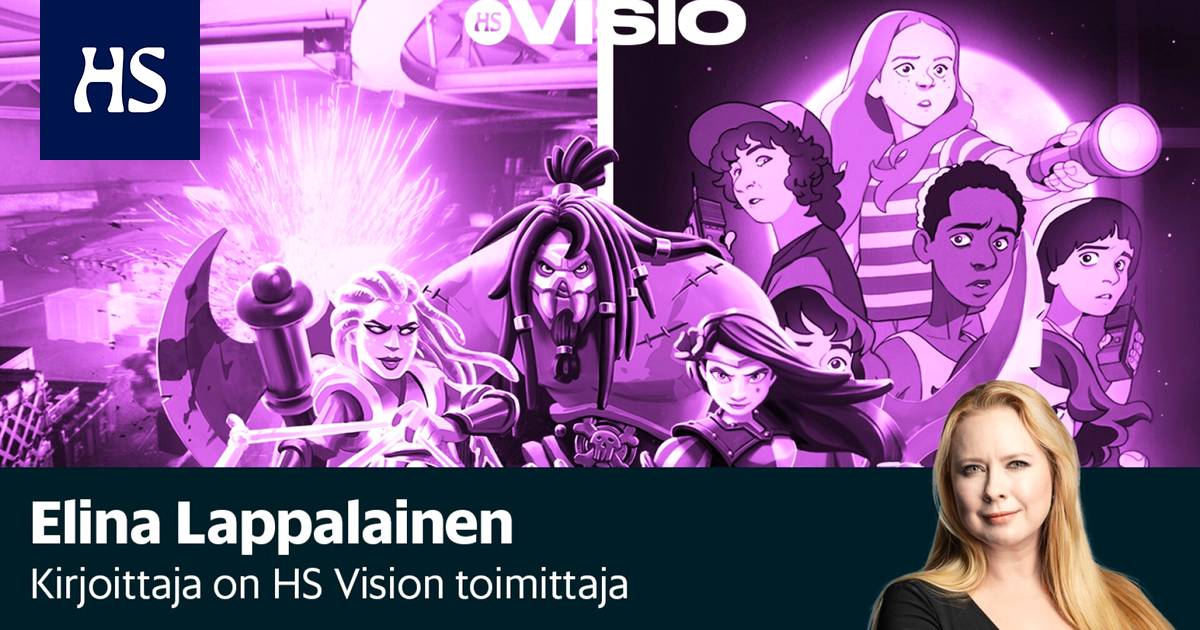 It is easy for an investor to firmly believe that Remedy will deliver on its promises of growth. Instead, Next Games ’Stranger Things are expected to hold their breath and Rovio’s new game was already disappointing.

Helsinki the three gaming companies on the stock exchange are hard to break into the same template, so different they are in nature and situations. Right now, however, all three are united by the fact that they are all pursuing a new leap of growth with new games. Whether it succeeds and how big the risks seem is then a very different matter.

In their interim reports on Thursday and Friday, Rovio, Remedy and Next Games reported on the progress of their projects and their financial figures. So now is a good opportunity to put into the package how we assess their strategy, risks and future.

An Inderes analyst has been interviewed to support the analysis Atte Riikolaa, which follows all three gaming companies.

Next Games: The future rests on the success of Stranger Things

Essential for the semi-annual report: Now there is a lot at stake. The future of Next Games rests largely on the success of its long-awaited Stranger Things game. The company said its key figures in the test market in Canada, for example, are promising and that the game will be released more widely in the third quarter.

The financial figures themselves were not surprising. The company’s old Walking Dead games generated a flat and slightly declining curve with a turnover of EUR 12.3 million in six months. EBITDA was slightly positive, although the operating result is still a loss of EUR 2.2 million.

When the company kept its forecast that it would reach a turnover of another EUR 40 million in 2021, it means great pressure on the success of the rest of the year. In practice, Stranger Things would have to forge more than 10 million euros in October-December alone.

“For the forecast to come true, it will require 116 percent growth for the rest of the year. Now there are waiting moods. Before concrete data is obtained, the value of a company’s share is sensitive to large changes. The growth of the next few years depends on this game, ”Atte Riikola commented.

Read more: Next Games still believes in a turnover of 40 million this year. It requires full success, for which there are no guarantees.

RISKS: There is still a risk that the company will have to lower its forecast during the autumn. On the other hand, Netflix, which makes the TV series Starnger Things, is a big partner and brings traction to the game as well.

User acquisition, or marketing, of new games also requires capital. Indeed, the central theme of the investor call was whether Next Games has enough money for the investment required to market Stranger Things.

The cash register now has EUR 4.9 million and in addition, the company has a credit limit from Finnvera to increase the marketing of the game, if the success of Stranger Things supports the view that it is worth investing in it.

A company that invests heavily in product development and making new games plays a big risk. It will soon need a strong cash flow from new games. If Stranger Things failed, it might have to raise more money again at a low valuation level.

FUTURE: Next Games has now put a lot of bangs on getting new games into the development tube. Earlier this year alone, the company tested more than 16 game concepts. Managing director Teemu Huuhtanen by the end of the year, the company will have three teams working on new games.

In the long term, the company aims for a turnover of up to EUR 250 million. However, it is still a long way off. Throughout its stock market run, Next Games has not yet succeeded in proving its promises and has tested the patience of investors.

If Stranger Things is a success, it will create a strong foothold and help fund the development of other games.

Remedy: The risks are small

Material of the interim report: Remedy, which is implementing its strategy with certainty and stability, is progressing according to plan.

The figures in the interim report were in line with expectations, and slightly better. The company’s growth expectations focus on the rest of the year and, above all, on 2023–2024, when its large game projects are expected to be completed.

Its turnover in April – June was EUR 9.4 million, an increase of 3.2 per cent from the corresponding period last year. Remedy’s operating profit in the second quarter was EUR 2.3 million and profitability also improved from the previous year.

RISKS: They hardly exist, or they are small. In large projects, there is always the possibility of failure in the gaming industry. But confidence is strong when you look at Remedy’s displays in making quality games.

The biggest challenge for Remedy may be to recruit the amount of skilled labor required for growth, but in an investor call, the CEO Tero Virtala reported extensively on actions in this area as well.

Screenshot of Remedy’s investor call. CFO Terhi Kauppi presented an illustrative example of how the income from various projects will increase Remedy’s net sales in the future.

FUTURE: On the scale of the Helsinki Stock Exchange, Remedy has already been a success story and brought good returns to investors as the share value increased.

“The great thing is that as a company, Remedy is still at the beginning of a growth path. If things go to the button and the multi-project model works, in 2024 the company would already receive revenue from seven different projects. In the long term, Remedy’s turnover potential is in the hundreds of millions of euros, ”says Atte Riikola.

In June, Remedy signed a co-publishing and development agreement with 505 Games for a new game project called Condor. It’s a four-player multiplayer game set in the world of the company’s previous Control game.

According to Remedy, its large-scale gaming project with Epic Games has entered a full production phase. Production of the smaller size game will continue as normal. According to the company, the Vanguard game project is also progressing at a good pace.

The single-player story sections for Smilegate’s CrossfireX and Crossfire HD games, meanwhile, are coming out later this year.

Rovio: How does a Turkish game studio fit into a corporate culture?

RELEVANT TO THE INTERIM REPORT: The most interesting news in the interim report was the acquisition made by Rovio and information on the progress of new games. They give an idea of ​​future growth opportunities.

The Darkfire Heroes game, released in April, generated gross sales of € 1.1 million in the second quarter. It was disappointing, so the game has not reached its goals so far. It is a strategy game developed by a Danish game studio bought by Rovio, and the studio’s first release after the deal. At the same time, it is part of Rovio’s new strategy to expand into new game genres. A weak start to the game doesn’t look promising.

Rovio also said it has decided to stop developing Hardhead Squad, a strategy game in trial marketing. That, too, is a setback for new strategy games.

Rovio acquired a new light entertainment game Ruby Games studio in Turkey. Hyper-casual games are manufactured in a fast cycle and their earnings model is based entirely on displaying ads while playing. For Rovio, it will bring new audiences, enable cross-advertising of other games and expand the portfolio into a new game genre. Ruby Games has several hit games that have risen to the top of the download lists.

Rovio’s financial figures were in line with expectations of its parties. The company’s net sales in April – June decreased by 0.6 percent to EUR 68.8 million.

Profitability weakened due to higher investments in game user acquisition, ie marketing, than in the comparison period. The Group’s adjusted operating profit was EUR 6.2 million, compared to EUR 13.8 million a year earlier. However, this was expected, as at the same time last year, user acquisition costs were exceptionally low when no new games appeared.

Read more: Rovio buys a Turkish game studio and hopes for growth from its hit game

RISKS: Will Rovio manage to expand its gaming portfolio and create new hit games alongside Angry Birds? Will Darkfire Heroes also turn to growth and how do you make strategy games?

There is still much to prove in the strategy.

“Some investors were disappointed with the news about the weak start of the new game and the end of the development of another strategy game. We have enough patience to look at next year. There does not seem to be any credit in the market for Rovio to turn to growth with this strategy, and the low valuation level of the share reflects this, ”Atte Riikola commented.

There are also risks associated with acquisitions. How does the Turkish game studio fit into Rovio’s corporate culture and how does the collaboration work?

So far, Rovio’s turnover is dependent on old Angry Birds games. There are a few big and stable hits in the portfolio, but if they fade, it will quickly show up in the company’s revenue.

FUTURE: If you believe in Rovio’s strategy, it is at a very interesting stage.

The company’s balance sheet is strong and it made an exceptionally tough result last year. Compared to that, its share price has been low, ie the valuation level is weak. An investor could therefore now consider the company as a low-cost purchase.

“In a good scenario, you could get a return on this through earnings growth and an increase in valuation factors,” Riikola says.

Thus, if the company were to grow in the longer term, the share price would rise. And if things go wrong, the stock price is already so low that it won’t fall very high.

Rovio’s desire to seek growth through acquisitions is part of the international gaming acquisition boom and consolidation. In the world, big gaming houses are now hauling smaller studios to their side, making their own games independently. It diversifies risks and, if successful, brings growth.

Elon Musk confirms that Tesla will accept bitcoin again, but on one condition