Ana Murugarren: “Nobody is surprised to see a woman directing anymore”

Ana Murugarren between Pepe Viyuela and José Mota in the filming of ‘García y García’, which opens in theaters this Friday.

Pioneer of Basque cinema, the director joins José Mota and Pepe Viyuela for the first time in the misunderstanding comedy ‘García y García’

Ana Murugarren (Marcilla, Navarra, 1965) is a Basque film historian with her husband, the producer Joaquín Trincado. Editor of Enrique Urbizu’s first films, ‘Your girlfriend is crazy’ and ‘Todo por la pasta’, as well as the short film ‘Mama’, which brought together Álex de la Iglesia and Pablo Berger, Murugarren has directed films such as’ Tres mentiras ‘and’ The fig tree of the bastards’.

‘García y García’ is his most commercial proposal, a comedy of misunderstandings that pairs José Mota and Pepe Viyuela in the role of a consultant and an aircraft mechanic who exchange roles. Carlos Lamela, the architect of the T-4, thought the germ of the script and has even ended up as a producer. “Carlos travels a lot by plane, and one day the idea of ​​the mistake occurred to him from the posters with which the drivers wait for those who disembark from a flight. What happens if they pick up two people with the same name ”, says the director. “Carlos got in touch with Antonio Resines, who was president of the Academy at the time, and he told him about us.”

“And what did Lamela think of the experience?”

– He is very satisfied with the film. He compares it to raising a building: something very pyramidal, which works like a clock. He liked the hierarchies of the shoot. And he loves that the movie is so visually powerful.

–The pandemic has allowed them to have at their disposal a whole hotel such as the Intercontinental in Madrid, the former Castellana Hilton, and the Teruel airport, the largest aircraft parking and maintenance platform in Europe.

-Yes. The entire hotel was empty for us: the suites, the reception … And Teruel was key. We went to all the small airports in Spain, but the problem is that they don’t have airplanes. In Teruel we had dozens of aircraft at our disposal. We were able to shoot in hangars and terminals and action scenes on the runway. A luxury.

–José Mota and Pepe Viyuela agreed on a television program 32 years ago, but they had never worked together.

– I have invented a comic couple that has a great future. We spent almost a year rehearsing, they came to the shoot with a lot of complicity. I see them as Steve Martin and Richard Pryor, or Jack Lemmon and Walter Matthau. José Mota is the serious one and Pepe Viyuela the thicker clown, they complement each other very well. And they are accompanied by a lot of actors with whom the Campofrío announcement could be made. 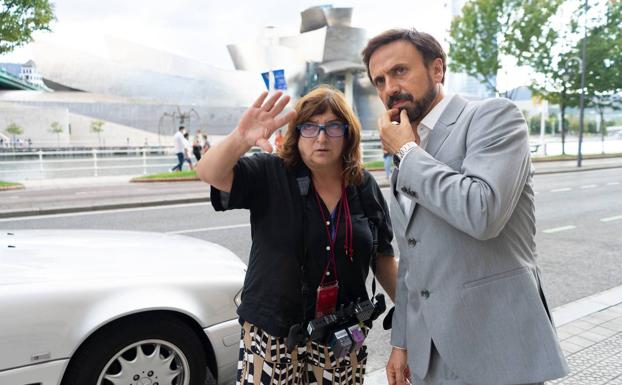 Ane Murugarren and José Mota on the set in Bilbao.

-It is surprising that nowadays I bet on the visual gag.

–It is that José and Pepe, in addition to saying things with grace, are gifted for the physical gag. We have drunk from many sources and the film is full of tributes: Blake Edwards, ‘One, two, three’ by Billy Wilder, ‘Goose soup’ by the Marxes, the Bogdanovich of ‘What’s wrong with me, doctor?’ .. I have tried to show things in a clean way within the shot, that the characters move.

The Bilbao of the 80s

“Let’s look back.” What was that Bilbao from the 80’s like in the times of ‘Your girlfriend is crazy’ and ‘Todo por la pasta’?

–Now it seems that Basque cinema is being made more in Gipuzkoa, but in those years everything was in Bilbao. It was a city with film noir sets. There was so much desire to do things! These are times that I remember fondly.

–And they were all self-taught.

-Exactly. We learned by making movies, with our imperfections. We broke the mold with the first comedy of Basque cinema, ‘Your girlfriend is crazy’. And then with a cop like ‘Todo por la pasta’, for whom we brought in special effects technicians from London like Kit West, who had won an Oscar for ‘Dune’. We shot in direct sound, we put Antonio Resines in a serious role … There is no longer a trace of that Bilbao.

– Do you consider yourself a pioneer of something?

– No problem. At that time we did things together. For many years I have been the only woman in the group, surrounded by men, but I have never felt neglected. It will be because of my strong character.

– Have you not felt machismo in your profession?

– Man, before there was much more: in sectors of the technical team, who looked at you over their shoulders, in the industry in general … Little by little all that is being overcome. Women continue to have some added difficulty. I think that there is still no complete parity, but so much progress has been made … No one is surprised to see a woman directing, before she drew attention.

An antithetical couple and the physical gag as an endearing resource

José Mota is a consultant specialized in refloating airlines in crisis; Pepe Viyuela, a mechanic who arrives the same day at the company to fix an airplane. One is rich and refined, the other lusty and clumsy. The exchange of personalities supports the entire script of ‘García y García’, which adds elements of action comedy, vaudeville and romantic entanglement. The most remarkable thing because of its modé and endearing is the resort to physical gag, almost always starring Viyuela, who gets messed up with the papers or stumbles over the suitcases.

With some dips in pace, ‘García y García’ sports a showy production design, with planes crashing in a terminal and well-resolved chases. His problem is not completely trusting his leading partner and resorting to a secondary gallery, from Carlos Areces to the girl youtuber Alexity, in the desire to satisfy as many audiences as possible.

-It was time. In cinema and in all areas we are climbing positions little by little.

-The cinemas do not raise their heads.

–We must support a sector that has the handicap of people’s fear of getting into a closed place. Measures such as those of the Basque Government of 35% capacity in theaters are a rogue, in Madrid it is 75%. ‘García y García’ is a popcorn movie, to be enjoyed with friends and family in a movie theater.

– What has the cinema given you?

-Everything. Cinema is my life, for better and for worse. I spend 24 hours a day immersed in the cinema. And I feel lucky because I work in what I like, not everyone can say the same.