An increasing demand for a “Covid-19” vaccine in Ajman 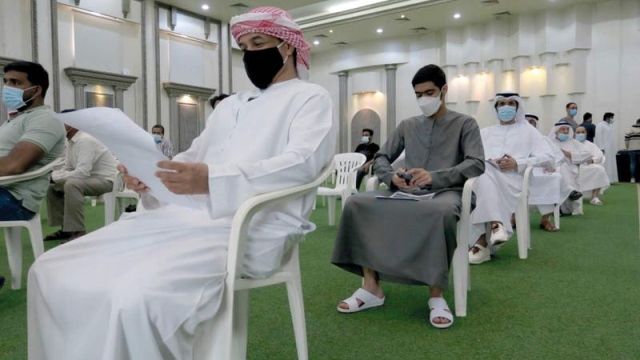 Ajman centers, which are designated to give the “Covid-19” vaccination, witnessed a great turnout from society groups, especially citizens, to immunize themselves and their community from the virus.

Citizens: Yusef Adel, Nasser Al Dhaheri, and Hassan Al Jasmi confirmed to Emirates Today that they came to take the vaccine, after seeing the great response from all community groups to receive the vaccine, pointing out that the procedures are easy, and are summarized in bringing the identity and conducting a vital signs examination. And meeting with the general practitioner to ensure that there are no health impediments, and not exceeding five minutes in total, calling on everyone to rush to take the vaccine and participate in the national campaign launched by the state to return to normal life, as it was in the past, as soon as possible.

They pointed out that they did not have any complications or side effects, especially since some of them finished taking the second dose yesterday, indicating that there are specialized teams, which contacted them after taking the vaccine by phone, to check on their health, and inquire about any side effects that occurred to them. , Stressing that the vaccination is safe, and does not call for fear of it, and everyone should take it to end the epidemic.

In turn, Dr. Fatima Al-Marzouqi, a consultant for family medicine at the Ministry of Health and Community Protection, confirmed to Emirates Today that the vaccine is available in six centers in Ajman, with the daily capacity of some of them reaching 3000 people, such as the single home, and at least 300 people. A new center in the Ajman Society for Community Development since the beginning of this week, with a daily capacity and capacity of about 900 people, pointing out that the center is equipped with the best equipment, and witnesses a great turnout by citizens because of its proximity to their homes, ease of procedures, reception and speed of completion.

She pointed out that the centers open their doors from eight in the morning until ten in the evening, indicating that the procedures followed in all state centers begin with recording the data of the person who wants to take the vaccine, after which his temperature is measured, and he is asked whether or not he is taking any type of medicine that conflicts with the vaccine, and then Take the vaccine.

She indicated that there are several groups that do not receive the vaccine, including: pregnant women, nursing mothers whose child is less than six months old, who thinks about pregnancy within three months, and those who take immunomodulatory drugs, active cancer patients, and acute heart problems, noting that there are seven field teams Ajman goes to government institutions, communicates with it, and coordinates vaccination of its employees.

She indicated that the vaccination of employees of the Endowment Department, the municipality, planning, the free zone, the General Command of Ajman Police, the Prosecution, the Court and Ajman University have been completed, noting that workers in private and government schools are also vaccinated at the Teacher Training Institute, in which the vaccination began last week.

She explained that most of those who took the vaccine developed immunity after four weeks, noting the importance of adhering to wearing the muzzle, social distancing and precautionary measures to limit the spread of the Corona virus by individuals, even if they had received the vaccine, indicating that the increasing numbers at vaccination centers indicates that Their confidence in the country’s medical cadres and the effectiveness of the vaccine.

Several groups do not receive the vaccine, including: pregnant and lactating women, and active cancer patients.

Such is the situation in the German mutant hotspots