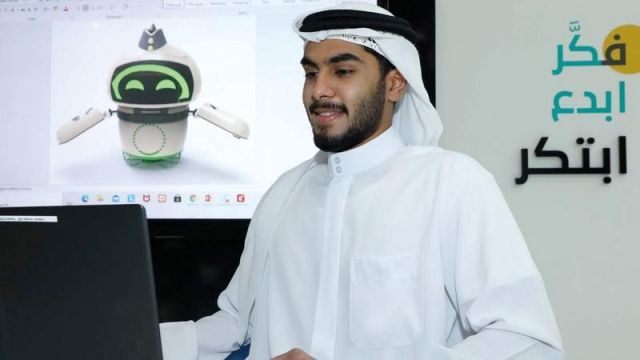 An oasis of talented people

The constant challenges the world faces, confirms the necessity of working to discover talented people and nurturing them, and providing opportunities for them.

Through this page … we shed light on the most promising talents that have been sponsored by the Emirates Gifted Association, hoping that publicizing them and their potential will contribute to helping those concerned to discover them and take care of their owners, and to provide the necessary incubators for their creativity, which will contribute to the future directions of the state, and achieve The aspirations of the leadership, for the UAE to be an incubator for innovation, innovators and talents, and perhaps this will be the start of new ideas that achieve these goals.

Passion, family interest, and the full care of the government, represented by the Dubai Police, factors gathered to take care of the talent of Lieutenant Engineer Saif Muhammad Al Sabbagh, the owner of the innovation of a flying robot, who can interact with the public in major events, and supervise the implementation of precautionary measures against the emerging corona virus, which is a phrase About an unmanned plane, it works as a guide and a tourist guide able to speak automatically with artificial intelligence techniques in all the world’s languages.

Al-Sabbagh told Emirates Today: “I started the science journey early thanks to the care of my parents, their constant interest in me, and their awareness of my passion for mathematics, and I was keen on practicing sports constantly, following the example of His Highness Sheikh Hamdan bin Mohammed bin Rashid Al Maktoum, Crown Prince of Dubai, President The Executive Council, which considers sport as the engine and a catalyst for its achievements.

He added that he finished high school with a score of 95%, so he applied to the Dubai Police to obtain a scholarship to study engineering, so they agreed to his request and provided him with the necessary care until he joined the Canadian University, and he began studying the specialization that he loves in engineering science, indicating that he has a special passion for aviation. During his university studies, he was keen to attend relevant conferences and exhibitions, specifically the Dubai Air Show, which inspired him to specialize in “drones” or drones.

He indicated that he practically integrated into this sector during his studies, so he participated in many competitions, starting with the IEEE competition organized in the Emirate of Ras Al Khaimah, then he participated for the first time in the Innovation Month competitions, representing his university at the state level, and won the second place in 2019, then He won the first place in his second participation in 2020, noting that he had realized the importance of this sector since the first spark of the technical drone revolution in 2015.

He explained that the first project he and his colleagues worked on was a traditional plane, and then they added additional tasks and programs to it, until he mastered drones programming by virtue of his specialization in engineering.

Al-Sabbagh added that he did not stop at this point, especially in light of the strong competition between the manufacturers of “drones” to update them continuously, so he decided to move to flying robots and design the first flying robot of its kind in the world.

He explained that the difference between his new project and the traditional drone is that the latter is often used in outdoor places, while the flying robot can fly smoothly between people, talk and interact with them, thanks to its reliance on artificial intelligence techniques, which is a future project that serves the strategy and objectives of the Dubai Police General Command.

He explained that he could program the flying robot to perform any tasks, such as educating major event goers about the need to wear the muzzle, and adhere to precautionary measures against the Corona virus, pointing out that he had the opportunity to present it to the Commander-in-Chief of Dubai Police, Lieutenant-General Abdullah Khalifa Al-Marri, during the student retreat. It was organized by the security ambassadors, and he was keen to display something tangible and not just a design. The flying robot was planned to perform tasks at the Expo Dubai, but the Commander in Chief asked him to develop it to be continuous, and it could perform tasks in schools, universities, facilities, and all major events. .

Lieutenant engineer Saif Muhammad Al-Sabbagh stated that he was keen to make the robot flying in order to avoid the obstacles that could face a normal robot that moves on the ground, indicating that he and the team overcame a difficult challenge, which is manufacturing it from environmentally friendly materials and humans, so that it does not cause any damage or Injuries if he collides with something, which will be a surprise, and he will be shown in a live experiment soon.

• The robot can interact with the public and monitor Corona violations.

How the foreign media reflected the death of Carlos Menem