An event in the basketball courts .. Al-Ahly youth stole “Al-Nasr” in 50 seconds 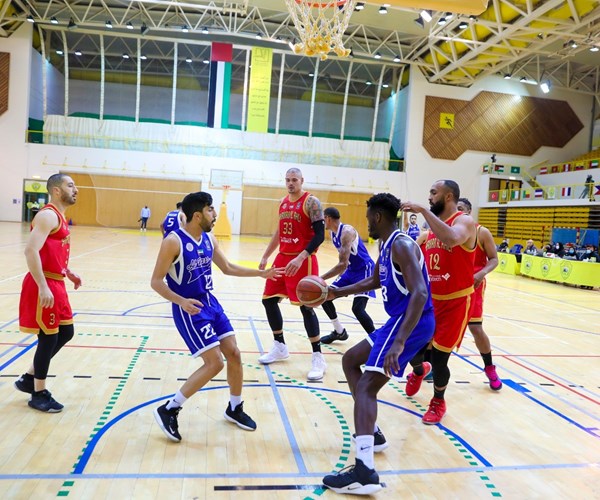 The fourth round of His Highness Vice President’s Cup for Men’s Basketball witnessed the height of excitement and fun in the two groups, as Shabab Al-Ahly snatched the match from Al-Nasr in the last 50 seconds, 3 points apart, in the first group, and Al-Wehda was able to stand alone at the top of the second group by winning 4 points. On the pterygium. In the first group, Al-Ahly youth regained the language of victories by beating Al-Nasr «76-73», over Al-Wasl club hall. The two teams finished the first quarter in a draw «24-24», before the «Brigadier» was able to gain the advantage with the result of the second quarter «20-12» », And the second half bore the title of returning the knights and achieving victory by gaining the advantage by the results of the third and fourth quarters by« 19-14 and 21-15 ». In a second match in the group, Al Wasl scored his first victory in the championship, by beating Al-Bataih by “83-79”, at the Sharjah Club hall. Al-Wasl revived his hopes of reaching the quarter-finals, with his difficult victory over Al-Bataih. The emperor outperformed in the first and third quarters by “21-16 and” 23-21, and they tied in the second quarter, 19-19, and Al-Bataih won in the fourth quarter, 20-23. In the second group, Al-Wehda succeeded in being alone in the lead, by defeating Al-Dhafra with a score of “87-83”, in a meeting held at the Bani Yas Club hall, after a close match, the first quarter of which ended in a 20-20 draw. Al Dhafra overcame the chance to finish the second quarter by a difference. 10 points, with a score of “15-25”, after a second period in which Al-Wehdah knew how to reduce the difference and win the match by gaining the advantage of “Annabi” in the third and fourth quarters by “27-12 and 25-23”. In a second match in the same group, Baniyas defeated Al Ain “58-45” at the Al-Jazira club hall. Al-Samawi outperformed in the first, second and third quarters by “16-9, 13-9 and 15-11”, and the leader outperformed in the fourth quarter “16-14 ». With the results of the round, Shabab Al-Ahly advanced to the first group runners-up position with 5 points, trailing one point from the leaders Sharjah and who won a rest in this round, and Al-Bataih after finishing their matches in the preliminary round in third place with 5 points, a point difference from Al-Nasr and Al-Wasl, the participants in the center. the last one. In the second group, Al Wahda moved away at the top with 6 points, one point ahead of their chasers Al Dhafra and Baniyas in second place, and Al Jazira occupies fourth place with 4 points, and Al Ain is in the fifth and last place with 4 points.

Gambling Basic Finns Tynkkynen: Slot machines must be removed from grocery stores of more than one hundred square meters

Weather in Germany: the time for a change in heat is now clear – before that, squalls bring danger