‘An earthquake’, a precipitous escape and many doubts after the collapse of the building in Miami 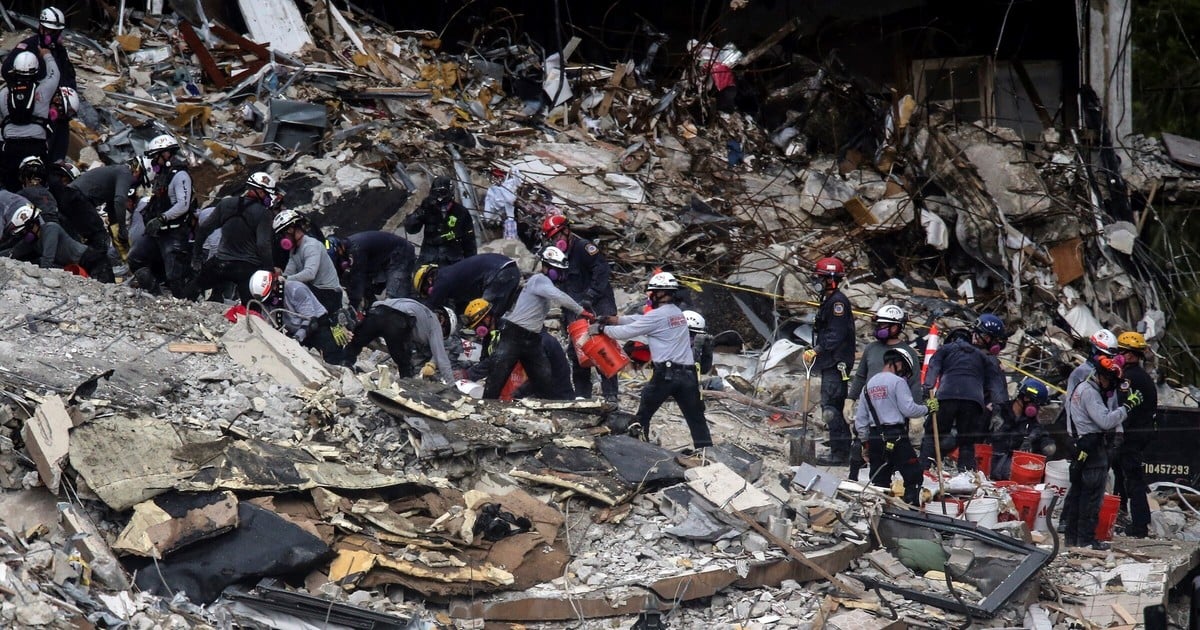 “Like an earthquake.” This is how it seemed to Janette Agüero the deafening roar that woke her up on Thursday, June 24 at around 1:20 a.m. in Miami.

It was not be for lowerly: 55 apartments facing the sea The Champlain Towers South complex, a residential block in Surfside, near Miami, has just collapsed in one of the worst urban disasters in American history.

“It was like an earthquake. We were, my husband and I, sleeping, and the shaking building woke us up, very violently, “Agüero, 46, told AFP. From his window, he only saw a cloud of dust.

With her husband Alberto and their two children, Jeanette spent a week on vacation at her in-laws’ apartment on the 11th floor of the complex, in the apartment block overlooking the street.

Mario Gonzalez visits the memorial for the disappeared and victims. AP Photo

Located north of Miami Beach, Surfside, of about 6,000 residents, is known for its white sand beachesto make it a destination for tourists and wealthy retirees. The town, about 20 km from downtown Miami, is also home to a large Jewish community.

Located almost on the beach, the 12-story Champlain Towers South complex built in 1981, stood out for its beige silhouette in the middle of modern residential blocks with glass facades.

The building had 136 apartments, either owner-occupied or rented. It was the ocean view units that collapsed for some reason not yet determined.

In ten minutes, firefighters were on the scene. From his balcony, Alberto Agüero asked them what to do. “If you can go, go away”they replied.

Upon leaving the apartment, “half of the landing to our left was gone, we could see the sea“recalled his son Justin.

The stairs were still there “but half destroyed, some steps were missing.” The descent seemed endless. “I wasn’t thinking about looking outside, I was concentrating on my feet,” said the 22-year-old.

In “survival mode”, the family reached the level of the garage, advanced towards “a big pile of rubble”, found a gap and ran towards the beach where she finally felt safe. It was then that Janette “broke down” and burst into tears. “Too many emotions”, He said.

Neighbors who took refuge on their balconies were evacuated with ladders. And the search operations for survivors began among the rubble, by hand on the surface and underground.

When it had not yet dawned, a teenager was taken alive from the ruins. A first report registered one dead, who was the boy’s mother, and 99 missing persons.

From the early hours of Thursday, the community center in the area, a few streets further north, was transformed into a reunification center for the families of the disappeared. The evacuees, like the Agüeros, they also went there to find temporary accommodation.

During the day, volunteers they distributed drinks, food, blankets and basic necessities, while the residents’ relatives gave details of who was supposed to be in their apartments when the disaster struck.

Bettina Obias, with no news from her uncle and aunt, donated a DNA sample. The authorities “they need it to verify which body belongs to which family”he explained to AFP.

Electric storms and a fire in the basements of the complex, which was only managed to control on Saturday, delayed rescue efforts. By Friday, the balance amounted to four dead and 159 missing.

Miami-Dade County Mayor Daniella Levine Cava said at the time that “still” it was expected to find people alive beyond the magnitude of the damage.

But this hope has been fading As the days go by, despite the machinery deployed at the site and the nearly 300 firefighters, assisted by canine teams, who thoroughly excavated the rubble.

Tuesday morning the death toll was 11 dead and more than 150 missing.

The first questions about the state of the building, in which they were working to update it in accordance with current regulations, appeared on Saturday.

According to a 2020 study, the building had suffered a “very subtle” subsidence in the 1990s. The authorities did not rule out that this was the cause of the catastrophe and the author of this study told CNN that he could not know if the sinking was “predictable.”

A 2018 report had already questioned the integrity of the property, stating “major structural damage” and “cracks” in the concrete columns in the basement.

And in a letter dated April 9, 2021, the president of the assembly of co-owners it was alarmed by the increasing “deterioration”.

To AFP, Janette Agüero said that “the garage always seemed to be in poor condition, there were cracks, it was flooded all the time. “

The authorities have promised a “thorough and comprehensive investigation“, while there is concern about the” sister “complex of Champlain Towers North, built at the same time by the same company a block away.

US President Joe Biden announced that will visit Surfside Thursday.