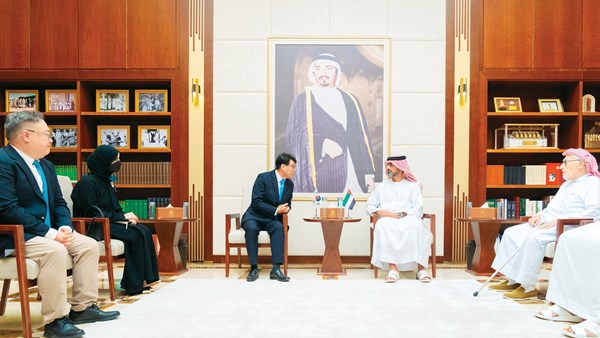 His Highness Sheikh Ammar bin Humaid Al Nuaimi, Crown Prince of Ajman, received, at the Ruler’s Court yesterday, Moon Byung-joon, Consul General of the Republic of South Korea, who came to greet His Highness and discussed means of cooperation. During the meeting, His Highness the Crown Prince of Ajman welcomed the Consul General of the Republic of South Korea, wishing him a pleasant stay, success and payment in the performance of his work duties, which would contribute to the consolidation of the existing relations between the two friendly countries and the strengthening of joint cooperation in various fields. During the meeting, they exchanged talks about the solid relationship between the UAE and the Republic of South Korea, which would achieve more progress and prosperity for the two peoples. For his part, the Korean Consul General expressed his happiness to meet His Highness the Crown Prince of Ajman, praising the depth of bilateral relations and the cultural renaissance witnessed by the UAE in general and Ajman in particular in all fields.

See also  An armored train traveling in the European storm