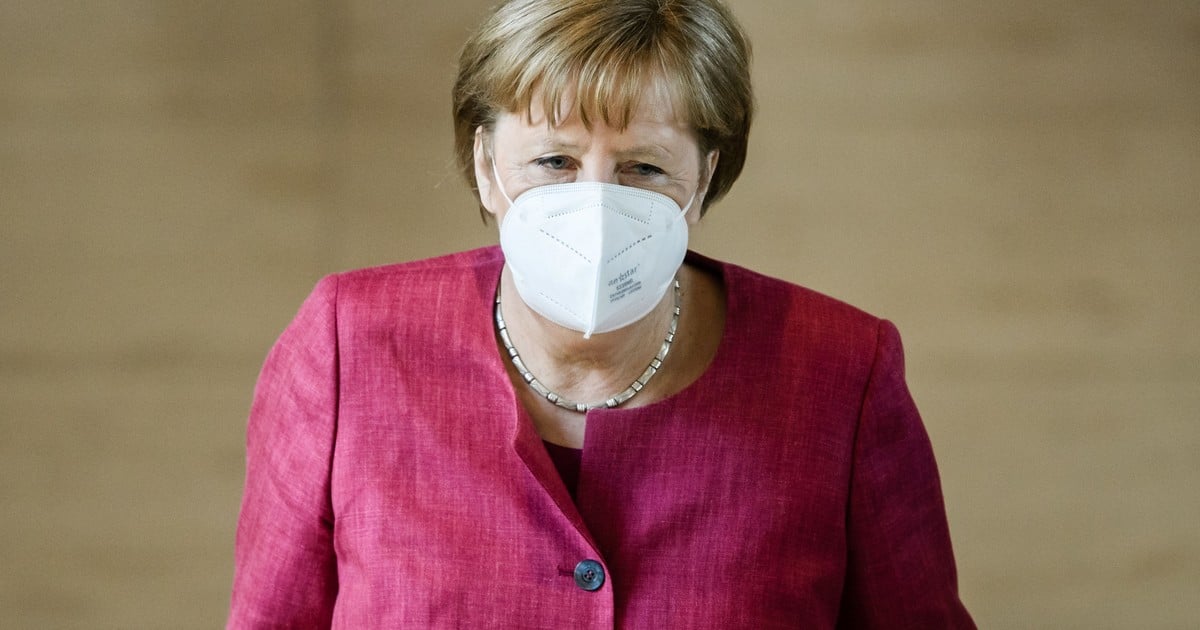 The German Parliament approved this Wednesday the draft law of Angela Merkel’s government known as “emergency brake”, which gives the chancellor the power to apply measures in those areas of the country with a high incidence of infections of coronavirus.

The lower house (Bundestag) backed the plan with the votes of the coalition between conservatives and social democrats. The project will be submitted tomorrow for ratification by the chamber of territorial representation (Bundesrat), with the prospect that it will foreseeably enter into force on Saturday.

Outside Parliament, thousands of protesters – including conspiracy theorists, deniers and far-rightists, as well as other citizens unhappy with the restrictions – protested against the project.

The police had to break up numerous protests outside the German parliament. Photo: AFP

The concentration, with about 8000 attendees according to public television RBB, was dissolved because people did not maintain social distance or wear masks.

Details of the law

The package modifies the Infection Law approved last year against the pandemic. Foresees the automatic activation of a night curfew from 100 weekly cases per 100,000 inhabitants.

In addition, face-to-face classes will be suspended from 165 cases, although from 100 onwards, the obligation to undergo two weekly antigen tests is implemented.

Images of the protest outside the German parliament. Photo: AFP

From a weekly incidence level of 100, contacts or meetings will also be limited, which will only be possible between cohabitants or at most one more from another household.

The nighttime restriction will apply between 10 p.m. and 5 a.m., although night walks or individual sports will continue to be possible until midnight. Initially, a curfew had been contemplated since 9 p.m., but it was softened by the strong reluctance that appeared.

The bill was approved last Tuesday by the Council of Ministers and entered the parliamentary process the following Friday, when it was presented to the Bundestag. Before the end of the week he must pass through the Bundesrat, where some resistance is announced of some “Länder”.

This is because these measures imply a limitation to their ability to act on the “Länder”, which are responsible for implementing the agreed measures.

German Chancellor Angela Merkel, at the time of voting in parliament. Photo: DPA

Merkel’s purpose is to establish uniform restrictions across the country. With this, it is proposed to avoid the current situation, in which each measure is agreed with the regional powers, but in practice there is a lack of control in its application, since it depends on the criteria of each “Land”.

The Minister of Health, Jens Spahn, justified the approval of the modification because he said that the situation is “serious, very serious” and he assured that vaccines and tests are not sufficient instruments to stop the spread of the virus.

“I do not understand the logic of those who say that we must wait for the ICUs to be filled,” Spahn protested against those who see no need to increase the federal instruments of action through the legal reform approved in the Bundestag.

Spahn also defended the advancement of the vaccination process – he said that around half a million people a day are being vaccinated these days – and assured that “within a few weeks one in three” citizens will have received an offer to be vaccinated .

But the minister insisted that the reform of the Infection Protection law points in the direction of restrict interpersonal contacts: “Only if we meet with another person can the virus spread,” he summarized.

Merkel’s coalition accelerated the approval of the emergency brake before the rise in coronavirus cases.

If in February the level had been lowered to 65 weekly cases per 100,000 inhabitants, it now stands at 160.1 cases, according to figures this Wednesday from the Robert Koch Institute (RKI) of virology.

This means a slight decrease compared to the previous day, but it is still too high.

The peak of incidence was registered on December 22 with 197.6 infections per 100,000 inhabitants in one week. Then came into force the paralysis of public life. Non-essential businesses joined the closure that, since November, has been in force for restaurants, leisure and culture.

Towards March, some measures were made more flexible and the reopening of non-essential shops for customers by appointment or with reduced capacity, as well as museums, was made possible.