America’s first lady reveals one of her hobbies 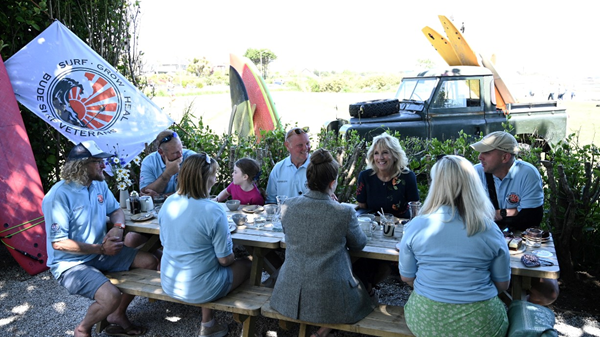 Today, Saturday, US First Lady Jill Biden revealed one of her previously unknown hobbies.
While meeting with a group of British war veterans and paramedics on the sidelines of the G7 summit, she revealed that she owns a surfboard.
Close to the summit venue in Cornwall, southwest England, the US president’s wife introduced herself to the group by saying, “I’m Jill, nice to meet you.”
Jill Biden met with a group (Bouderf) of veterans and volunteer social support and surf trips for veterans, paramedics and their families.
She told the group that she had previously attended the Invictus Games, an international sporting event for injured military and veterans founded by British Prince Harry.
And the wife of the US president continued, sitting in a place overlooking “Mounts Bay” in a sunny weather, “The water is very calm .. I have a surfboard .. a long white board with a big butterfly on it.”
One of the group members told her that they started in a small group, but now they have many members who surf, adding that this activity “saved their lives”.
The first lady is accompanied by her husband, President Joe Biden, who came to England to participate in the Group of Seven summit, which is being held over three days and ends tomorrow, and is his first international trip since taking office last January.
The couple met Britain’s Queen Elizabeth and other senior members of the royal family on Friday evening, and are due to meet the Queen again for tea at Windsor Castle on Sunday.