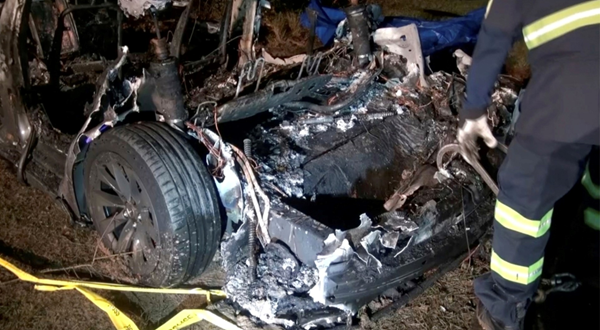 Two US transportation safety agencies announced that they had opened investigations into a traffic accident that killed two people in a “Tesla” car that was likely driving without a driver behind the wheel.

The vehicle was traveling quickly when it collided with a tree on Saturday evening and burned it down in Spring, near Houston, which led to its complete destruction.

Harris County Corporation official Mark Herman told the Wall Street Journal that the preliminary elements of the investigation showed that the car was traveling without a driver.

He pointed out that the authorities found only indications that two people were in the car, one next to the driver’s seat and the second on the back seats.

The US Traffic Safety Agency (NHTSA) said in a letter to Agence France-Presse on Monday that it “has immediately set up a special team to investigate.”

“We are actively discussing with the local security forces and Tesla to find out additional details about the incident, and we will take appropriate measures when we have additional information,” she added.

The National Transportation and Safety Bureau in the United States (NTSB) also announced, on its part, via Twitter that it has dispatched two investigators to the site of the accident, and they will focus on research on “the vehicle’s work and the fire that followed the collision.”

The circumstances of the accident sparked many comments on social networks and re-launched the debate about the capabilities associated with autonomous driving through Tesla cars, that is, the “Autopilot” system that allows the car to park itself and adapt to navigation on the highway.

Out of the corona In the evening, the government will negotiate the lifting of interest rate restrictions