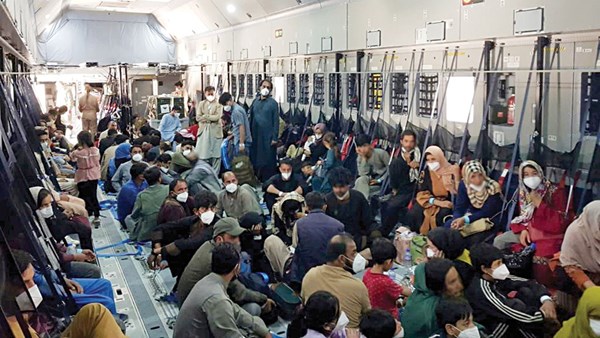 Yesterday, the United States, Britain, France and Australia thanked the UAE for facilitating the evacuation of thousands of foreign nationals from Afghanistan, praising the UAE’s humanitarian initiatives aimed at helping the afflicted around the world.
Ethan Goldrich, Chargé d’Affairs at the US Embassy in the UAE, expressed his country’s gratitude to the UAE for its contributions to facilitating the evacuation of thousands of American nationals from Afghanistan and others. Goldrich added: This enormous operation would not have been possible without the keenness of the two countries to enhance their close cooperation. The American diplomat expressed the United States’ gratitude for the UAE’s humanitarian efforts to assist in the evacuation of diplomats, American citizens and foreigners from Afghanistan, praising the cooperation of the concerned authorities in the UAE to facilitate the evacuation process safely and around the clock, and praised the attention and care it provides, which was manifested through the good hospitality that The Emirates is famous for it. He valued the UAE’s humanitarian initiatives aimed at helping the afflicted around the world, pointing out that the complex problems spread around the world require partnerships, and that the existing cooperation to facilitate the safe transit of travelers evacuated from Afghanistan confirms the country’s commitment to overcoming global challenges. Goldrich said: “The international community still has a lot to do, and the contributions of the UAE are pivotal to its success.”
For his part, Patrick Moody, the UK ambassador to the UAE, valued the joint efforts between the UAE and the UK, which contributed to the evacuation of 4,883 people from Kabul to the UK via the UAE. Modi explained that the cooperation between the British government team in the UAE and Emirati friends continues to ensure the safe passage of the brave men and women who contributed to supporting the humanitarian efforts in Afghanistan.
Modi stressed that all this would not have been possible without the exceptional support provided by the UAE government, explaining that this cooperation confirmed the strength and durability of the partnership and friendship between the two countries. Modi expressed his thanks and gratitude to all authorities in the UAE, including Dubai Airports, Dubai Police, Ministry of Defense, Ministry of Foreign Affairs and International Cooperation, Dubai Civil Aviation Authority and National Emergency and Crisis Management Authority.
The British ambassador said: “We appreciate the humanitarian support provided by the United Arab Emirates, which was not limited to the United Kingdom, but extended to include international partners, which highlights the UAE’s commitment to continuing relief efforts in Afghanistan and supporting our efforts.”
In the meantime, Xavier Chatel, Ambassador of the Republic of France to the UAE, praised the UAE’s cooperation and quick response to facilitate the evacuation of nationals from Afghanistan, and announced that it hosted 5,000 Afghan citizens who were evacuated from Afghanistan before traveling to other countries. Xavier said: The Emirati support for France to facilitate the evacuation of nationals from Afghanistan was greatly appreciated by the French authorities, and had the greatest impact on the hearts of the families of the nationals who were evacuated as quickly as possible and with high professionalism that ensured their safety.
Regarding France’s participation in Expo 2020 Dubai, he said: His country’s participation in Expo 2020 Dubai will witness the presence of many French parties in this important global event, under the umbrella of the French pavilion, which will hold many celebrations and events to review the outcomes of the French-Emirati partnership in In various fields, amid a strong French presence and visitors to see the unique tourist attractions in the Emirates, including the Louvre Abu Dhabi and other iconic landmarks of global interest.
For her part, Heidi Venamore, Ambassador of the Commonwealth of Australia to the UAE, expressed her country’s thanks to the UAE for its efforts in facilitating the process of evacuating Australian nationals from Afghanistan. Venamore described the state’s response to Australia’s request in this regard as “quick and valuable”, noting that Scott Morrison, Prime Minister of the Commonwealth of Australia, recently expressed his thanks and appreciation for the support, during a telephone conversation with His Highness Sheikh Mohamed bin Zayed Al Nahyan, Crown Prince of Abu Dhabi and Deputy Supreme Commander of the Armed Forces. which the UAE provided to his country to evacuate its nationals from Afghanistan, in addition to the evacuation of diplomatic missions of a number of friendly countries. She noted that the Australian Prime Minister, during his speech in his country’s parliament, praised the support provided by the United Arab Emirates to Australia in these unusual times. Regarding the UAE’s temporary hosting of 5,000 Afghan citizens who were evacuated from their country, prior to their departure to other countries, the Australian ambassador said: “This is another example of the generosity of the people of the Emirates, and a practical proof of the country’s ability to respond quickly to the crisis in the spirit of humanity within the framework of international partnerships. ».