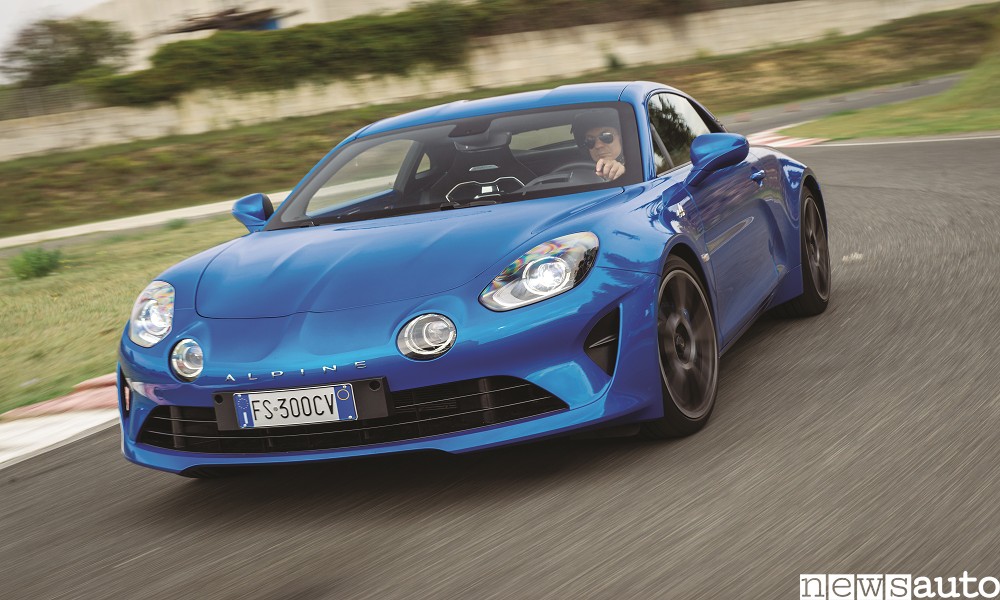 Track test of the Alpine A110 Premier Editionthe limited edition with engine 1.8 l turbo 4-cylinder with direct injection from 252 hp. There A110 it is beautiful, well finished, without being over the top, comfortable in everyday driving, but damn fast when you decide to drive seriously, both on the track and on a mountain road

Alpine A110 Premier Edition, features, how it is EXTERIOR

The livery blue Alpine it embraces the entire body of the car which, with the ribs on the bonnet, the low and receding tail and the 4 headlights represent a beautiful tribute to its noble ancestor. The most interesting aspect is that it was possible to avoid the use of spoilers thanks to a careful study of the lower aerodynamics of the car and of the rear diffuser; which resulted in a CX of only 0.32. The assembly is good.

Alpine A110 Premier Edition, features, how is it INTERIOR

Interiors they are sporty but elegant, with nice seats Sabelt anatomic monocoque (they do not adjust in inclination, but are fixed with screws that can still allow a minimum of displacement to the most demanding) side coated in blue stitched leather like the steering wheel and dashboard. There are no drawers, side pockets, but only a few holes to place the house keys and the mobile phone.

Instead of the analog instruments, there are digital ones that change when you switch between modes Normal at the Sport and Trackbut now this is fashion and you have to get over it.

The motorcompletely in aluminum and placed in a central transverse position, is the same 1.8 liter turbo direct injection used on the new Mégane RS; only that in this configuration it delivers 252 hp at 6,000 rpm and 320 Nm of torque. The turbocharger is of the type Twin Scroll. Very innovative are the surface treatments, such as DLC (Diamond Like Carbon) for valve tappets and the Mirror Bore Coating for the lining of cylinder liners, directly borrowed from the racing world to improve smoothness and reduce friction.

Benefit from a air / water intercooler to keep the performance of the berlinetta constant, in the face of the well-known thermal disposal difficulties typical of “all-backs”. The exchangecombined with the brilliant 4 cylindersit’s a Getrag 7-speed robotic double clutch (oil bath).

Enfant Terrible was the nickname that theAlpine A110 he was able to conquer himself on the competition fields in 70’s, for the irreverence and the ability to embarrass her opponents, just like a terrible child who shocks everyone with her brazen way of behaving. Can the new A110 also be considered a terrible girl, or simply a nice trinket to show to friends on Sunday morning for an aperitif at the bar? With her elegance, the unexpected comfort that you discover from the moment you open the door and step into the low cockpit, she could fool us all.

Then, after placing the seat (which manually can only be moved forward and backward) and the steering wheel, you enter another dimension. It is crazy for me to discover that, on the way from home to the racetrack, the suspensions perfectly absorb the irregularities of the road surface like a comfortable small car and with Getrag 7 gears docile as the variator of a Honda SH 125. There is traffic and the temptation to sink your foot on the accelerator is enormousbut I am forced to trot in the queue.

Then I arrive at the racetrack and sling on the track before the photographers arrive. A launch lap to check the condition of the asphalt belt and, in mode Track, I start hitting big. That gearbox, which reminded me so much of a variator of an asphyxiated scooter, is a shot in the manual setting. It is quick both in upshifting and in downshifting and, at the first violent braking, I immediately throw in three gears to see how it behaves.

He takes them all without problems, how cool! It is not a bluff! I insert nastiness in this first variant, still trying to be clean, and I go out opening the throttle with a certain advance compared to the chord point. I deliberately trigger a power oversteer that I control with a slight counter-steering.

The right rear wheel briefly strokes the grass beyond the curb, and I launch towards the bend in the bridge at full acceleration. This Alpine accelerates damn hard and, in the distance, I realize that I am a hair over the limit of lateral grip. There is probably a bit ‘too much roll and perhaps to make it full would need the Michelin Pilot Cup instead of Sport. The fact remains that I have to lighten a little on the right pedal, but she does not break down.

Arrival at Corkscrew, big stomp on the brake and new violent insertion. Left, right, left, GRRRRRR GRRRRR GRRRRR… devour the curbs without too much trouble.

Arrival at detached from Rome very unbalanced (I confirm that with a little roll it could also be corrected for the extremists of the steering wheel) and I hit the brakes again. The car seems to float in these violent braking, but surprisingly maintains the line and the stopping distances are reduced. You just have to get used to it! I sacrifice entry with a delayed arming, skim the inner curb at the very end and keep buttoned to the right to be lightning-fast in inserting the more difficult double variant of the track.

The rear end is very free, it slips away allowing me to insert with the speed of a foil stroke, and that contraption that simulates the blocker does its job not so badly! Left, right, left and right again, with two drifts controlled a little by me, a little by the computer that pretends nothing has happened up to a certain point; then he puts a patch on it without being overheard … like that friend who, during a fight, hits the tough guy who is about to attack you from behind, but he doesn’t tell you to make you feel cool … you know, right? With wheels not yet straight, with the third inside, I open the gas again.

This 4-cylinder turbo is fantastic for delivery and extension, it has a guttural bass sound similar to that of an old A110 with two double-barrel carburettors: who knows how it would go with forty more horses that would be pulled out here with extreme ease (read ravanata the control unit) . At the detached of the Sea I get there in fifth just leaning, I give a deadly ram on the brake and, with the third inside, I go through this long bend in full acceleration, entering the rope at the very end of the curve. The rear end widens, there is a bit of rolling to disturb me, but I go out like a cannon shot and I throw myself back on the straight to enjoy a few more laps.

When I finish the test, the brakes smoke but still do their job testifying to the fact that the stock pads are not suitable for the track. But everything else yes, in the face of those who believed it was a simple aperitif machine!

Alpine A110 Premiere Edition test conclusions: what do we think?

Very fast but, at the same time, unexpectedly usable even in everyday drivingthe Alpine A110 it is one of those cars that goes beyond expectations, as if whoever built it wanted to make it look less bad than it actually is. If it were mine, I would like it with a real self-locking, the 17 “wheels of the Pure version (which costs 56,100 euros against the 60,000 euros of the Legende and our Premiere Edition, already sold out), 4 Michelin Pilot Cups and an aeronautical brake hose kit /brake pads racing.

At the debut there were also the “Pure” and “Legende” versions

L’A110 Pure is devoted to greater sportsmanship. It boasts monocoque seats as standard Sabelt from 13.1 kg and 17 “alloy wheels to go below 1,100 kg, and three driving modes: Normal, Sport and Race.
L’A110 Legends it stands out for its 6-way comfort seats, black or brown leather upholstery, the cockpit in satin carbon fiber and the presence of a Focal audio system. The 18 ″ two-tone “Légende” alloy wheels stand out, paying homage to the original motif of the A110 Berlinette 1600S.

👉All articles about the Alpine A110

👉What do you think? Take a leap on the FORUM And Google News all the news of the car

Meloni, first public issue after the vote: “Italy must return to defend its interests”

While the world of motorsport is wondering what will be the outcome of the financial investigation on compliance with the...

Two policemen did not prevent Rushdie's stabbing.. and the intentions of the attacker appear