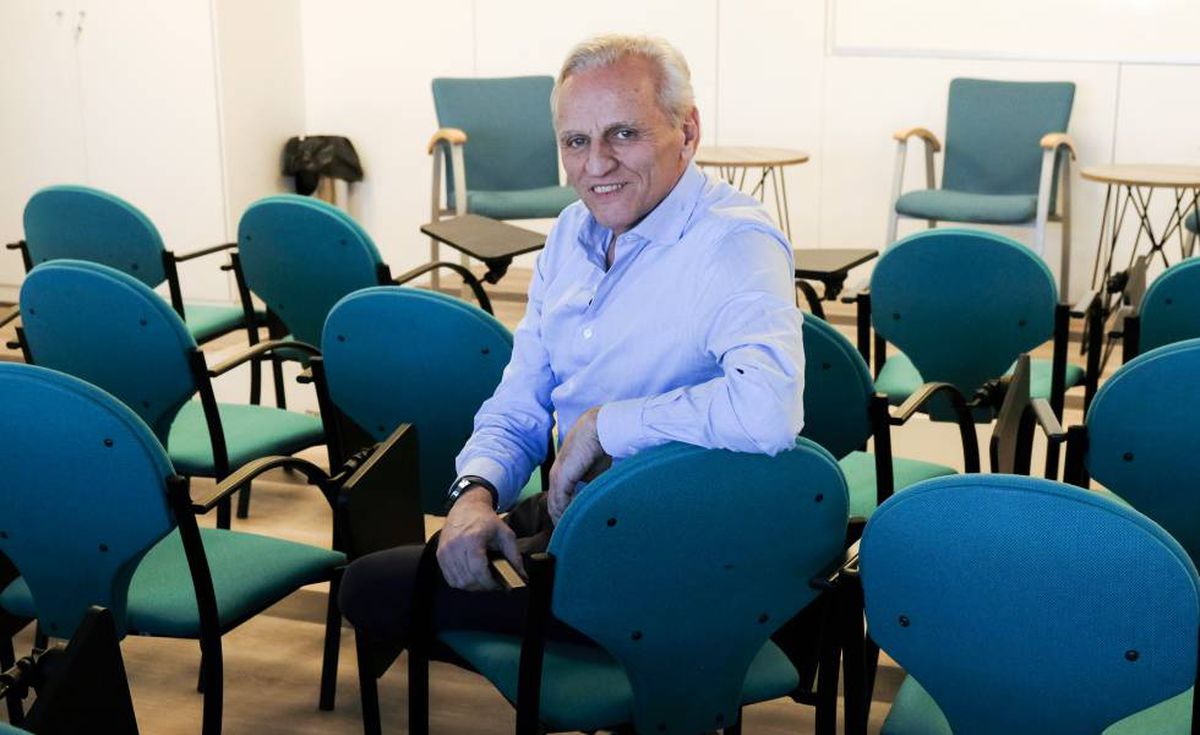 If there is a war in the Spanish language, Álex Grijelmo would like to be a peace mediator. “The first step to reach an egalitarian agreement should consist of looking at the Spanish language without prejudice, as a cultural expression, as a close friend willing to help us and not as an enemy that oppresses us”, writes Grijelmo in Proposed Agreement on Inclusive Language, recently published in Mexico by Taurus. A non-aggression pact on duplications such as “all and all” instead of the “misnamed generic masculine” (all), or on the best way to describe sexist violence in the media, or on how to improve keywords for feminism What mansplaining (in which the author hopes not to fall. “I have done it with respect for the two parties in dispute, understanding everyone’s positions,” he says).

Grijelmo (Burgos, 1956), is deputy director of EL PAÍS, director of its School of Journalism, responsible for the Book of style of this newspaper, and author of 10 works on language. In this interview he comments on his peace proposal. “I do not pretend to be right, nor to be in possession of the truth,” he says. “It is a proposal that I make like any other citizen, reasoned and documented, but it is a simple proposal.”

Question. Why go to the Indo-European origin of the language to affirm that Spanish is not the one with a sexist problem?

Answer. I like the Spanish language so much that these accusations against the language that it is macho, that it is sexist, that it was constructed by the hetero-patriarchy, hurt me. The Spanish language was built in macho societies, no doubt. But not as a consequence of those macho societies. And as I explain in the book, there are also macho societies that have given rise to languages ​​with feminine generics, with which that relationship does not seem very clear. You have to go to Indo-European to find out when the female gender was born.

Indo-European is our grandmother language, Latin is our mother tongue. And in our grandmother language the feminine gender is born from a gender that encompasses all animated beings. There was a gender for inanimate beings and another for animate beings. And within the gender for animated beings, the feminine is born. But the female gender is not born as a rib of the male, it is born as a rib of the generic. When the feminine is born, the generic unfolds to fulfill the mission of masculine and generic. So, precisely the generic is born from the visibility of females in animals, and of women, which was decided about 5,000 years ago. And that’s the story. It is not that the masculine has appropriated both genders, encompassing everything in an unjust invasion. The cause was different, and it must be known.

P. But, in its use, Spanish can be very sexist.

A. Of course. But the uses are not from Spanish, they are from Spanish speakers. Sexist uses are our fault. Let’s not blame the tongue, that is, let’s not blame the knife for murder. The knife is used to cut bread and to kill someone, but it is not the fault of the knife. Blame it on how we use the knife. And of course language – not so much language as language – is full of macho uses. There are intolerable sayings, some sayings also intolerable, some asymmetries that we use that should be outlawed. But these are problems in the use of the language, they are not in the language system. Nothing forces us to use that. On the other hand, the system does force us to follow the generic, the so-called ‘male generic’. I prefer to call it ‘the generic’.

P. To avoid ‘the generic’ duplications have been proposed, such as saying ‘all and all’. You mention that the Constitution of Venezuela is full of these duplications and that leads to other types of risks. What do you mean?

R. Well, first it must be said that duplications seem fine to me, as long as they are measured, that is, as long as they serve to denounce a situation of inequality, and as a sign of identity that the speaker is in favor of equality. Now, the Constitution of Venezuela shows us that it is impossible to read it. If you say ‘I’m going to read the Constitution of Venezuela’, in the tenth article you leave it because it is unbearable. [El Artículo 41 de la Constitución de Venezuela se lee: “Sólo los venezolanos y venezolanas por nacimiento y sin otra nacionalidad podrán ejercer los cargos de Presidente o Presidenta de la República, Vicepresidente Ejecutivo o Vicepresidenta Ejecutiva, Presidente o Presidenta y Vicepresidentes o Vicepresidentas de la Asamblea Nacional, magistrados o magistradas del Tribunal Supremo de Justicia…].

Another effect of duplications is that positive or neutral ideas are usually duplicated: ‘citizens’ or ‘colleagues’. But it is not often said ‘we must raise taxes on the rich’, ‘end the power of the bankers and women bankers’, ‘we must stop the corrupt and the corrupt’. Negative ideas are not usually duplicated. The generic that supposedly favors men also hurts them. We find a dead person on the street and someone says ‘we must arrest the murderer’. Well, the murderer or the murderess, right?

P. There is another alternative not to duplicate, which is known especially in Argentina, which is to use the word AND, on them, or in other words that end in A and O. What do you think of this option?

R. I think it’s good as a provocation to encourage this debate, and as a denunciation of the inequalities that exist in society. Now, let’s go to practice. Can we get 500 million people to adopt this new morpheme? In how much time? In 10 years? In 20 years? I see it difficult. On the other hand, we have an experience, precisely in Argentina. At the beginning of the 20th century, the entire Argentine educational system was focused on using the your instead of you. And with all the schools and all the teachers focused on that, it was not achieved. Children in class were told ‘I love, you love’, but they would go out into the street and say ‘I love, you love’. It was of no use because interventions on the tongue from above are often catastrophic. The language is built from below. Millions of speakers have to decide to use a usage for that to be established in the language system.

P. What about the word judge, What is most used in Argentina and Chile? Was it a victory for feminism?

R. Maybe it is a victory for feminism. The word judge was formerly used to call ‘the judge’s wife’. So there was a time when it was a discredited word for a judge. Because calling herself a judge was not representative of a profession, but she was married to a judge. For which the judges themselves wanted to be judges. Because it was a more prestigious word. Over time, this use ended up being rather rural, and then practically non-existent, with which it was possible to recover a signifier that was already in the language to use it as a prestigious element.

I think that technically that morpheme added there is not necessary, as they would not be in ‘the young woman’ or in ‘the criminal’. We would not say ‘la criminala’. Amount of common gender words do not need to add that morpheme because the gender mark is already in the article. The same information is given by ‘the judge’ as ‘the judge’. So, well, it is more the result of understanding the word in an identity struggle that has had its fruits.

P. Why do you prefer to talk about ‘sexist violence’ than about ‘gender violence’?

R. It is curious that with ‘gender violence’ there is what is usually criticized: the invisibility of what is not named. We say gender violence, but what gender? Although we do not say violence of the masculine gender, we all understand that it is the violence of the masculine gender. If you say ‘Mexicans are nicer than Hungarians’, for example, everyone understands that it is about Mexican men and women, even if they are not named (I hope no Hungarian will read us). In ‘gender violence’, it is understood that it is sexist violence. Well, I think that the word gender is a euphemism that was imposed in English to not say sex and that we have copied from English [la palabra gender] by inferiority complex. Believe that a foreign culture, specifically the culture of English, is superior to our own. I think it would be more accurate to say sexist violence because by naming it that way, we condemn. Gender does not express any condemnation. It is not known what gender it is. And also the word gender is sometimes positive and other times negative. It is negative in gender violence because it is replacing a male chauvinist. But it is positive if we talk about gender policies, that is, equality policies. Gender is a euphemism, it is an Anglicism, it is ambivalent. But it is already in place and it has its consequences. To many people all that sounds strange, it sounds too academic. It is not a transparent word in Spanish, in this sense. I think it would be better to talk about sexist violence and machismo, sexism, and the violence of men. Calling things by name.

P. There are other words that have also been inserted in Spanish from English: manspreading or mansplaining. What do you think of that power of English?

R. This phenomenon of the influence of English in the 20th century is relatively recent. The previous influence was from the French, and before the Italian. There have always been influences, and almost always because a particular culture was considered more prestigious than your own. That is why I speak so many times about the inferiority complex. And it also happens in the identity language of feminism with anglicisms that I think do not contribute to millions of people identifying with those words. Because they just don’t understand them. They are not transparent words. It is not known what is inside them. Well, if you want to use them, then great. I think there would be words that would be more effective from a social communication point of view. They are not errors of feminism, they are errors of social communication.

P. What alternatives would you propose?

R. In order to manspreading, scatter. Getting loose, or not making room for the one next to you. For the other, mansplaining, I would say: macho-explanation. Or macho explanation, if you will.

Murcia wants to avoid the Linense party at Enrique Roca

Attorney Eduardo Casal reported himself to be investigated for illicit enrichment